So, what now? by @BloggersRUs 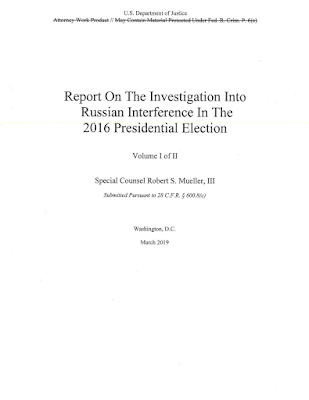 The image of the sitting president revealed in what is, essentially, Robert Mueller's over 400 pages of impeachment referral to Congress is a familiar one. Donald J. Trump is a man with no regard for the law or loyalty to the Constitution he swore an oath to defend. His first impulse is to view every issue as how it makes him look personally. The referral portrays a White House "infused by a culture of dishonesty."

It is a portrait of a man who does not understand the basic concept of public service, a man frustrated by the strictures of the law, who cannot understand why, when he says jump, his hirelings (at least some of them) do not say "How high?" but rather ask themselves is this legal?

Donald Trump is a man accustomed to treating the law as an inconvenience and telling the truth as optional. Yet, he was elected to uphold the law on behalf of the United States of America.

Although the investigation established that the Russian government perceived it would benefit from a Trump presidency and worked to secure that outcome, and that the Campaign expected it would benefit electorally from information stolen and released through Russian efforts, the investigation did not establish that members of the Trump Campaign conspired or coordinated with the Russian government in its election interference activities.

Campaign chair Paul Manafort had given internal Trump campaign polling data to Konstantin Kilimnik, a Russian/Ukrainian political consultant linked to pro-Kremlin figures in Ukraine. He discussed campaign messaging with Kilimnik and identified Michigan, Wisconsin, Pennsylvania, and Minnesota specifically. But because of Manafort's lack of credibility, Mueller's office could not determine what happened to the data or whether it had made its way to Russian intelligence for use in its election-interference efforts.

But Trump and his coterie's efforts to conceal Russian connections and thwart an FBI investigation into Trump's affairs looms large in the referral. Because of the Office of Legal Counsel's opinion that precludes indicting a sitting president, Mueller did not recommend that for obstruction of justice, although the evidence provided for it is voluminous. Mueller leaves that to the Legislative Branch, summarizing a bill of particulars (Pg. 158, Pt. II):

The President launched public attacks on the investigation and individuals involved in it who could possess evidence adverse to the President, while in private, the President engaged in a series of targeted efforts to control the investigation. For instance, the President attempted to remove the Special Counsel; he sought to have Attorney General Sessions unrecuse himself and limit the investigation; he sought to prevent public disclosure of information about the June 9, 2016 meeting between Russians and campaign officials; and he used public forums to attack potential witnesses who might offer adverse information and to praise witnesses who declined to cooperate with the government. Judgments about the nature of the President's motives during each phase would be informed by the totality of the evidence.

The Mueller referral mentions impeachment as one remedy. The word impeach or impeachment appears 11 times. He also notes, "The OLC opinion also recognizes that a President does not have immunity after he leaves office."

Faced with evidence that Russia interfered with the American elections and his campaign's effort to conceal that Trump may have benefited from it, Trump expresses no concern for defending the country he swore an oath to defend. He is more interested in it not undermining his glorious victory over his hated rival. He has done nothing to secure future elections from foreign interference.

The Mueller Impeachment Referral shows the only thing stopping the sitting president from committing even more future-prosecutable crimes is people around him with enough vestigial integrity to say no to him, to ignore him, or to talk him out of it. With publication of this redacted referral, soon there will be fewer left to hold his leash.

Ending his tenure as president as swiftly as possible is a matter of national security, if not everyday crime prevention.

The focus now is on what Democrats will do. The New York Times reports:

Speaker Nancy Pelosi and her lieutenants are keenly aware of the risks of initiating an impeachment inquiry. They are intent on not repeating what they view as the mistakes made by Republicans who undertook a partisan impeachment of President Bill Clinton in the late 1990s and failed to get him removed from office by the Senate. Both parties at the time believed the effort bolstered Mr. Clinton’s national standing and hurt Republicans at the polls.

Citing the proximity of the 2020 election and the unlikelihood of Trump's conviction in the Senate, Pelosi's No. 2, Rep. Steny H. Hoyer of Maryland, told CNN, “Based on what we have seen to date, going forward on impeachment is not worthwhile at this point.” Mr. Hoyer misses the point.

What is at stake is whether this country is still a nation of laws or of men. Or of one man, to be precise. The burden of defending that principle and their oaths to the Constitution falls not only on the Democrats and a House impeachment inquiry, but on Trump's Republican colleagues. House Minority Leader Kevin McCarthy and Senate Majority Leader Mitch McConnell have a duty to schedule an Oval Office conversation to recommend Mr. Trump resign, whatever the personal consequences, for the good of the country. About which Trump cares nothing if it does not reflect back his own image.