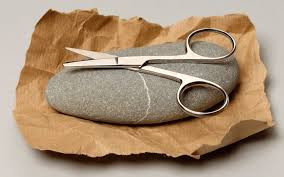 With his preprinted placards and handful of notes, the sitting president used Wednesday comments by Speaker Nancy Pelosi that he is engaged in a cover-up to bail on his own non-plan for spending $2 trillion on infrastructure. In a caucus meeting before she met with Trump, Pelosi tried to calm calls by Democrats for an impeachment inquiry into, among other crimes, Trump publicly obstructing House investigations. Then she visited the White House to discuss infrastructure.

Slate's Jim Newell observes, "Democrats had suggested the president undo some of his signature 2017 tax legislation to pay for it, but Senate Majority Leader Mitch McConnell immediately called this a “nonstarter,” and just about all Republicans agreed with him." Not just Republicans in the Senate, but in the House too.

"I walked into the room and I told Senator Schumer, Speaker Pelosi, 'I want to do infrastructure. I want to do it more than you want to do it...but you know what, you can't do it under these circumstances. So get these phony investigations over with,'" Trump told the press corps. Trump refuses to do his job until Democrats stop doing theirs.

Wednesday's events should add to the ranks of House Democrats already in the impeachment column. NBC News reports the number already stands at 31. 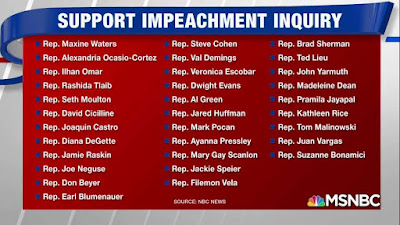 In a statement issued to the Baltimore Sun, House Majority Leader Steny Hoyer of Maryland said, “We are confronting what might be the largest cover-up by any administration in history. The American people deserve to know whether their government is acting in their best interests,” Hoyer said. House committees must continue their investigations, Hoyer said, “and we’ll see where the facts lead.”

Fellow Maryland Democrat Elijah Cummings complained Tuesday night the president's stonewalling has rendered the House powerless on oversight. "The question now becomes: What do we do, do we allow this to continue, and where do we end up if we do that? I’m still mulling it over," Cummings said. On impeachment, he added, "I'm getting there."

For her part, Pelosi met the press again after the president's tantrum, saying only Trump “took a pass” on an infrastructure deal and that she was praying for him. Paper covers rock.

It was a perfectly tuned sign-off. Anger seldom works against Trump; he owns the currency and can always issue more of it. In addressing the rogue President directly, or speaking about him in the third person, Pelosi usually adopts a tone that is more sorrowful than angry, while firmly reminding everyone—Trump included—that Congress is a coequal branch of government that won’t be run roughshod over. It is a measured strategy that worked during the lengthy standoff over Trump’s border-wall proposal. (The White House eventually capitulated.) And Pelosi has reasons to believe it is still working, despite the pressure she is facing.

Pelosi wants to initiate a formal impeachment inquiry only as a last resort forced upon Democrats by Trump's criminal misbehavior rather than by pressure from her caucus. Representative Zoe Lofgren (D-Calif.), a member of the House Judiciary Committee told Wednesday's caucus meeting, “having an impeachment inquiry doesn’t change a darn thing.” Pelosi agreed.

That position is sustainable only so long as Democrats keep winning against the administration's stonewalling in court. Trump's mounting losses — two since Monday — build the Democrats' case for impeachment on obstruction grounds even without hearings formally labeled impeachment. But there can be none without documents and witnesses. With court rulings in Democrats favor on obtaining financial records from Trump's accounting firm and Deutsche Bank, the documents may be forthcoming. On Wednesday, the Justice Department agreed to turn over counterintelligence and foreign intelligence-related documents under subpoena to the House Intelligence Committee. Chairman Adam Schiff (D-Calif.) cancelled a planned meeting to discuss “enforcement action” against the department.

But critical to solidifying public opinion for impeachment will be hearing appearances by special counsel Robert Mueller and former White House counsel Don McGahn. Trump has already refused to allow McGahn to testify under subpoena. Mueller is reportedly reluctant to testify voluntarily and may draw a subpoena as well. But like Pelosi, he may be waiting to be forced rather than appear willing or eager.

How long Pelosi can hold off her caucus may depend on how much and how soon her six investigative committees obtain the information they require.