Nevada with women in the majority by @BloggersRUs

Nevada with women in the majority 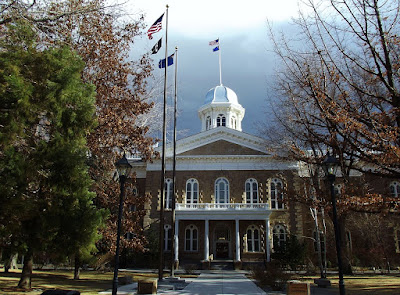 Plenty of commentary has addressed the cultural clash between Baby Boomer workaholics and millennials faced with a declining life prospects and a warming planet. Recent legislation in multiple states targeting Roe v. Wade as well as the Me Too Movement point up a much deeper, more longstanding conflict: male domination of the political and cultural space.

That old order is passing, but will not go gentle into that good night. Wise men (and not so wise). Good men (and not so good). Men both wild and grave, and those not so much of either. But men all, mister poet.

Nevada's state legislature, however, is the first in the country with a majority of women in office. A combined 52 percent between the Assembly and the Senate. When a Republican stood to defend a hoary piece of legislation requiring doctors to ask a woman seeking an abortion if she is married, newly elected senator Yvanna Cancela shot back, “A man is not asked his marital status before he gets a vasectomy.” The Washington Post reports the hearing room fell silent.

In Alabama, women make up just 15 percent of the legislature that just passed a near-complete ban on abortion.

But times have changed in Carson City:

The female majority is having a huge effect: More than 17 pending bills deal with sexual assault, sex trafficking and sexual misconduct, with some measures aimed at making it easier to prosecute offenders. Bills to ban child marriage and examine the causes of maternal mortality are also on the docket.

“I can say with 100 percent certainty that we wouldn’t have had these conversations" a few years ago, said Assembly Majority Leader Teresa Benitez-Thompson (D). "None of these bills would have seen the light of day.”

The change did not occur by accident nor organically. Women organized, ran for office, and won. The "boys club" that in 2015 refused to schedule a hearing for Sen. Patricia Ann Spearman's (D) bill on pay equity for women is over.

Kelly Dittmar, a scholar at the Center for American Women and Politics at Rutgers University observes, "it’s probably a lot more significant that we have 49 legislatures left to go."

It is not simply their politics and ethnicity conservative opponents of Reps. Ilhan Omar (D-Minn.), Rashida Tlaib (D-Mich.), and Alexandria Ocasio-Cortez (D-N.Y.) oppose. It is their gender and the challenge they and their female colleagues in Congress represent to a "man's world." Even in these Trumpishly incorrect times, revanchists do not have the manliness to say so aloud. Except in locker rooms surrounded by other naked men.

If male politicians could get pregnant, there would be as many Planned Parenthood clinics as there are Post Offices. 💌📬 https://t.co/2YUR8Htpqm