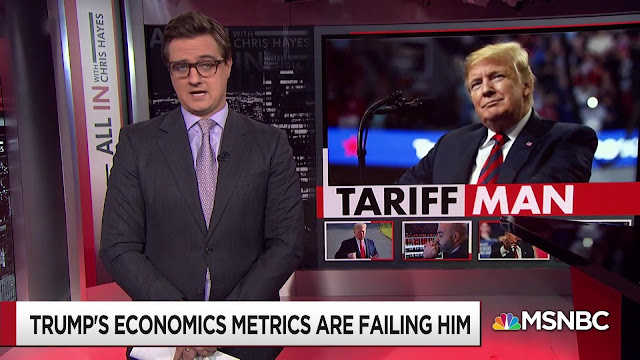 Greg Sargent takes a look a the numbers on the economy in the new Q poll. And despite the vast majority of Americans thinking the economy is good, Trump isn't getting credit for it beyond his base (as he shouldn't.)


The poll finds shockingly good numbers on the economy. A total of 71 percent of voters said the economy is either “excellent” (22 percent), or “good” (49 percent). A majority of respondents — 52 percent — said they are better off financially today than they were in 2016.

But Trump’s approval rating is only 38 percent, while 57 percent disapprove.

A chorus of pundits will point out that this reflects disapproval of Trump on things that are unrelated to the economy, such as his racism, authoritarianism, and temperamental unfitness for the presidency, and surely there’s a lot to that.

But the poll also raises the possibility that Trump’s economic record may also be part of the problem. It finds that on his signature issues of trade and China, he’s also underwater:

As it is, Trump might end up benefiting from the good economy to a lesser degree than he expects, even though the rule is supposed to be that good economies help incumbents. As CNN’s Harry Enten recently explained, at nopoint during his presidency has Trump clearly benefited from the economy: Though we’ve had low unemployment and solid economic growth throughout, his approval rating has generally hovered around 42 percent.

After all, Trump’s economic agenda involves a fusion of conventional Republican policies with his “America First” trade agenda, which is supposed to represent a species of economic populism that broke with GOP orthodoxy. Under Trump, neither of these has been popular. Many recent polls have found that Trump’s tax cut, which overwhelmingly benefited corporations and the wealthy, is underwater.

But, in a bit of a surprise, the Trump economic policies that most prominently broke with GOP orthodoxy — that is, on trade — have alsoproven unpopular, as the new Quinnipiac poll demonstrates. We’ve seen Trump’s trade wars have all kinds of negative effects, hitting parts of his own base particularly hard, even as a deal with China has proven more elusive than he expected.

It also seems plausible that public impressions of Trump’s trade and China policies have become entangled with impressions of his “America First” nationalism. Trump’s decision to pull out of the Paris climate agreement and his disastrous immigration policies have also proved deeply unpopular.

Now, it is true that Trump mainly needs these policies to deliver him back the non-college-educated whites that powered his victory in 2016. The Quinnipiac poll does find that majorities of those voters do approve of Trump on trade and China, though they are surprisingly bare majorities, of 54 percent and 55 percent, respectively.

This mirrors a Post poll from July 2018, which found that only 39 percent of voters in that same region thought the tariff wars with China would be good for U.S. jobs, versus 59 percent who did not.

Remember: this poll shows that 71% of the public thinks the economy is good or excellent. And his job approval sits at 38%.