The rule of law is failing by @BloggersRUs

The rule of law is failing 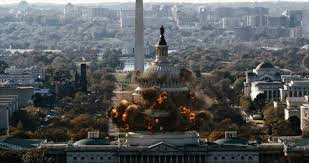 Still image from White House Down (2013)

The White House resists document releases to House investigations on the premise Congress has no “legitimate legislative purpose” in requesting them. So far, the administration's court battles have the primary effect of delaying rather than stopping the release of records requested by half a dozen House committees investigating the sitting president's financial history for foreign influence, etc. The administration's failures this week in court to block release Trump financial records suggest Speaker Nancy Pelosi's go-slow approach to opening impeachment hearings will eventually pry loose information necessary to move House inquiries forward.

One of the principle arguments against the go-slow approach is impeachment hearings give the House additional leverage for prying loose documents it does not have now. Experts disagree on that. Lawfare explains, "Historically, the initiation of impeachment proceedings has had implications for the way the judiciary committee obtains relevant material. But broader changes in congressional rules and procedures in recent years mean that today’s judiciary committee may not need the same kind of special powers it was granted as part of previous impeachment inquiries."

Rules that existed during the Nixon and Clinton impeachments have "evolved," allowing committees investigative leeway now they did not have then, Lawfare argues.

By Thursday night, all the dangerous shortcomings of the slow-going approach had reasserted themselves. And they suggest not that the normal oversight process will be sufficient to protect the rule of law, but that the institutional guardrails surrounding the rule of law are faltering all at once, and more aggressively than at any time since Trump won the presidency.

Beutler refers to the announcement that Donald Trump has granted Attorney General William Barr sweeping authorities to declassify intelligence information regarding the about the opening of the Russia investigation:

“In a corrupt act of political retribution, our president has ordered his utterly compliant attorney general to root out Deep State demons that exist only in the unhinged mind of our nation's leader,” Gene Rossi, a former federal prosecutor, told Newsweek.

Beutler argues impeachment would give House Judiciary Committee Chairman Jerrold Nadler a "forceful legal argument" for obtaining "all the testimony and documentation he needs" for removing Trump from office.


As @brianbeutler argues, an impeachment inquiry would give @RepJerryNadler "a forceful legal argument" to get "all the testimony and documentation he needs":https://t.co/S6RbOYB6X2

More in this thread: https://t.co/Jk8wJp8oCx

If "the institutional guardrails surrounding the rule of law are faltering all at once," there is no reason to believe rules governing impeachment that once held will be any more sturdy. What discussions of process and precedent miss (in this non-lawyer's eyes) is the fundamental bad faith of any argument put forward by this feral administration and its enablers. Team Trump is committed to no fact, no argument, no principle beyond the first news cycle in which any fail to provide the president cover. Relying on traditional rules of law to rein in a lawless administration seems folly.

If the administration's “legitimate legislative purpose” argument fails, then Hydra-like, other more faithless ones will replace it, if not outright defiance of the law, Congress, and the courts. Those who place their faith in opening a formal impeachment inquiry are no more clear-eyed than defenders of Pelosi's go-slow approach and of the "defeat him in 2020" strategy.

Trump has always behaved as a law unto himself. His refusal to release documents legally requested by Congress will not be reversed by court orders, nor by whimsical additional congressional powers granted by placing "impeachment" before the titles of ongoing committee investigations. What this aberrant administration has revealed are fundamental weaknesses in the design of the republic that lay hidden so long as those running it respected rules. Trump does not. Trump is fundamentally a coward and a bully:

The first rule of bullies is that they are drawn to perceived weakness. No bully wants to try to pick on someone bigger and stronger than they are — they want to terrorize weak and helpless people who won't fight back. The point is the psychological satisfaction of easy domination, not brawling for its own sake. Indeed, most bullies are not actually very good at fighting, and will fold immediately if faced with a real physical confrontation.

There may soon be a time to take to the streets. Until then, oh-so-smart progressives had best display talent for out-of-the-box thinking. Playing by the rules will not stop an administration that defies them all.