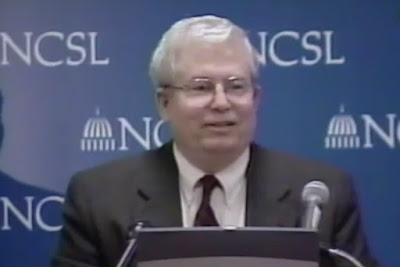 "If you gerrymander the census, you can gerrymander everything," Ari Berman of Mother Jones told Chris Hayes Thursday night on MSNBC's "All In." Berman spoke to Hayes about the New York Times blockbuster report on new evidence in pending litigation over the 2020 census.

The Department of Commerce v. New York case before the Supreme Court will determine whether the government may add a citizenship question to the 2020 census. Just weeks before a ruling is expected, a court filing Thursday morning alleges Trump administration officials concealed the origins and true purpose of Commerce Secretary Wilbur Ross's memo requesting the addition of a citizenship question. Commerce claims the data would enhance enforcement of the Voting Rights Act. Plaintiffs (and quite a few minority advocates) alleged that was a pretext for rigging the census to deliberately undercount minority populations. Documents turned up in North Carolina support the plaintiffs.

Thomas B. Hofeller, the godfather of Republican gerrymandering efforts, died last August at 75. He left a cache of external hard drives and flash drives his estranged daughter, Stephanie Hofeller Lizon, turned over to Common Cause in March. The drives contained 75,000 documents, many relating to Hofeller's redistricting efforts. Lawyers for the plaintiffs in Common Cause v. Lewis are challenging North Carolina's state legislative districts as unconstitutional gerrymanders. Hofeller, a cartographer, drew those state districts. The case goes before a three-judge Superior Court panel on July 15. (The federal case challenging the state's congressional maps is awaiting a U.S. Supreme Court ruling in June.)

The same law firm handles both the North Carolina and New York cases. Attorneys turned up evidence Hofeller was the originator of the census scheme detailed in the Times report:

The first involves a document from the Hofeller hard drives created on Aug. 30, 2017, as Mr. Ross’s wooing of the Justice Department was nearing a crescendo. The document’s single paragraph cited two court decisions supporting the premise that more detailed citizenship data would assist enforcement of the Voting Rights Act.

That paragraph later appeared word for word in a draft letter from the Justice Department to the Census Bureau that sought a citizenship question on the 2020 census. In closed congressional testimony in March, John M. Gore, the assistant attorney general for civil rights and the Justice Department’s chief overseer of voting rights issues, said Mr. Neuman gave him the draft in an October 2017 meeting.

The second instance involves the official version of the Justice Department’s request for a citizenship question, a longer and more detailed letter sent to the Census Bureau in December 2017. That letter presents nuanced and technical arguments that current citizenship data falls short of Voting Rights Act requirements — arguments that the plaintiffs say are presented in exactly the same order, and sometimes with identical descriptions like “building blocks” — as in Mr. Hofeller’s 2015 study.

The Washington Free Beacon, a conservative website, hired Hofeller in August 2015 "to study the 'practicality' and 'political and demographic effects' of using citizen voting age population ('CVAP') in lieu of total population ('TPOP') to achieve equal population in redistricting," plaintiffs allege. Hofeller ultimately concluded this scheme was unworkable “[w]ithout a question on citizenship being included on the 2020 Decennial Census questionnaire.”

Attorneys Arnold & Porter allege Ross’s expert advisor A. Mark Neuman and senior Department of Justice official John Gore lied in testimony about the origins of the request. The Times describes Newman as a decades-long friend of Mr. Hofeller’s. The court filing further alleges Hofeller crafted the Voting Rights rationale behind the citizenship question to conceal its actual purpose (emphasis mine):


Dr. Hofeller concluded in a 2015 study that adding a citizenship question to the 2020 Census “would clearly be a disadvantage to the Democrats” and “advantageous to Republicans and Non-Hispanic Whites” in redistricting...

Karen Flynn, president of Common Cause, issued a statement on the discovery:


“The evidence reveals that the plan to add the citizenship question was hatched by the Republicans’ chief redistricting mastermind to create an electoral advantage for Republicans and non-Hispanic whites. This contradicts testimony by Administration officials that they wanted to add the question to benefit Latino voters, when in fact the opposite was true.”


"But Hofeller and others want to go beyond that. They want to say, okay, we're going to have an undercount and then on top of that we're going to draw districts based only on citizenship, which is going to further reduce the clout of Hispanics and other minority and immigrant groups, so that we can draw as many districts as possible for white Republicans. It will make the gerrymandering we saw in 2010 look tame by comparison."

The GOP electoral stratagem resembles a set of Russian nesting dolls. Gerrymandering, photo ID laws, a myriad of voting rights restrictions passed nationwide, plus a stolen Supreme Court seat confirm Republican leaders' desperation to retain power by any and all means necessary. Add manipulating the census to that list. Republicans believe they cannot win without rigging elections in their favor. They exhibit no compunction about doing so.

Ms. Lizon, a self-described political progressive, "despises Republican partisanship, but also has scant respect for Democrats," the Times reports. Her father schooled her in conservative principles but proved by his actions he had abandoned them in pursuit of permanent Republican Party control.

In that, she can be confident her father was not alone.