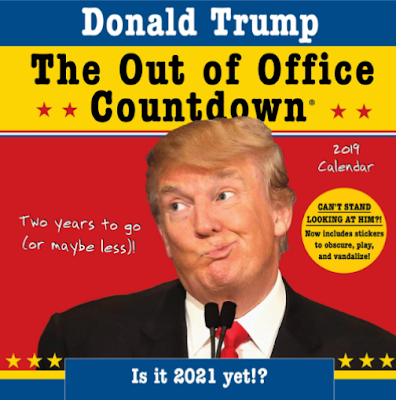 Donald Trump's administration suffered yet another in its ongoing string of court losses on Monday. In a 41-page ruling, U.S. District Court Judge Amit Mehta declared Trump's effort to block a congressional subpoena for records from his accounting firm was without merit:

In addition to upholding the House Oversight and Reform Committee’s subpoena to accounting firm Mazars USA for eight years of Trump’s financial records, Mehta took the extra step of denying the president’s request for a stay pending appeal.

Jay Sekulow, one of the president’s personal attorneys, said: “We will be filing a timely notice of appeal to the D.C. Circuit Court of Appeals.”

That would be the same Jay Sekulow former Trump personal attorney Michael Cohen implicated along with the sitting president in possible obstruction of justice and suborning his perjury, according to a transcript of Cohen's testimony before the House Permanent Select Committee on Intelligence released Monday. But I digress.

Sweeping aside the administration's assertion it is immune from congressional oversight, Mehta wrote:

According to the Oversight Committee, it believes that the requested records will aid its consideration of strengthening ethics and disclosure laws, as well as amending the penalties for violating such laws. The Committee also says that the records will assist in monitoring the President’s compliance with the Foreign Emoluments Clauses. These are facially valid legislative purposes, and it is not for the court to question whether the Committee’s actions are truly motivated by political considerations. Accordingly, the court will enter judgment in favor of the Oversight Committee.

The sitting president insisted he would appeal and called the ruling "crazy," adding, “We think it’s totally the wrong decision by, obviously, an Obama-appointed judge.”

Leading the D.C. Circuit Court of Appeals to which Trump will appeal is Judge Merrick Garland. But I digress.

Mehta's ruling came hours after Trump blocked former White House counsel Don McGahn from testifying before Congress. McGahn, a key witness in the Mueller investigation, was expected to testify to his own statements already published in the publicly available Muller report. The sitting president fears McGahn's televised testimony could negatively impact public opinion on impeachment. Trump insists the investigation exonerated him of all wrongdoing. (It did not.)

As a private citizen McGahn, is not obligated to obey the White House directive nor the Office of Legal Counsel memo drafted to support the president's demand. But McGahn will accede to the president's instructions, his attorney wrote in a letter obtained by the Washington Post.

Trump continues to stonewall all inquiries no matter how much he loses in court. The bad habits of a lifetime of using the "simple math" of the cost of lawsuits to stiff small businesses he's cheated will not work with federal courts or with Congress.

Not that he won't try. Unlike cheated contractors, Congress may not run out of money to fight Trump in court (nor tire of beating him repeatedly). Trump is betting again on simple math, on Congress running out of time ahead of the 2020 election. That is, unless more Democrats like Rhode Island congressman David Cicilline run out of patience first.

If Don McGahn does not testify tomorrow, it will be time to begin an impeachment inquiry of @realDonaldTrump.