We can stop predicting arrival of a constitutional crisis by @BloggersRUs

We can stop predicting arrival of a constitutional crisis 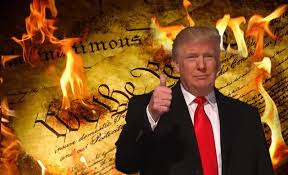 Marvel's heroes dissolved into dust in seconds. The Republican party is dissolving democracy just as publicly, but less noticeably because they are doing it over time and across states. Frogs and boiling water, the slow, steady dissolution of American democracy and the system of checks-and balances and separation of powers that has sustained it for generations goes unchecked.

Approaching five hundred former federal prosecutors have signed a statement asserting that Donald Trump's actions outlined in the Mueller report would precipitate multiple felony charges of obstruction if committed by any other American not the president. The list of former career prosecutors is extensive and bipartisan, the Washington Post reports.

Treasury Secretary Steven Mnuchin on Monday notified House Democrats he would not deliver Donald Trump's business and personal tax returns House Ways and Means Committee Chairman Richard Neal (D-Mass.) had requested under law. Mnuchin claimed it the request serves no legislative purpose and informed the committee the Department of Justice would issue a formal legal opinion justifying his action.

House Democrats have drafted a resolution for holding Attorney General William Barr in contempt of Congress for failing to turn over an unredacted version of Special Counsel Robert Mueller’s report including supporting evidence. House Judiciary Chair Jerry Nadler (D-N.Y.) said, "The Attorney General’s failure to comply with our subpoena, after extensive accommodation efforts, leaves us no choice but to initiate contempt proceedings in order to enforce the subpoena and access the full, unredacted report." Nadler has scheduled a vote for Wednesday. The resolution reads in part:

The investigation into the alleged obstruction of justice, public corruption, and other abuses of power by President Donald Trump, his associates, and members of his Administration and related concerns is being undertaken pursuant to the full authority of the Committee under Rule X(l) and applicable law. The purposes of this investigation include: 1) investigating and exposing any possible malfeasance, abuse of power, corruption, obstruction of justice, or other misconduct on the part of the President or other members of his Administration; 2) considering whether the conduct uncovered may warrant amending or creating new federal authorities, including among other things, relating to election security, campaign finance, misuse of electronic data, and the types of obstructive conduct that the Mueller Report describes; and 3) considering whether any of the conduct described in the Special Counsel’s Report warrants the Committee in taking any further steps under Congress’ Article I powers. That includes whether to approve articles of impeachment with respect to the President or any other Administration official, as well as the consideration of other steps such as censure or issuing criminal, civil or administrative referrals. No determination has been made as to such further actions, and the Committee needs to review the unredacted report, the underlying evidence, and associated documents so that it can ascertain the facts and consider our next steps.

Nadler will meet with the Justice Department on Tuesday to "negotiate an accommodation" in the dispute over the unredacted report, Axios reports.

All these events represent an unprecedented, rolling constitutional crisis. Debate is over on that. The problem with Democrats cutting slack to an administration and a rival party steeped in bad faith is they take it. And then some.

"It’s heartening to think that in a year and a half we can vote our way out of our predicament," writes Dahlia Lithwick, "but it’s a bit like suggesting that we have a good long national think about how things are currently going and tend to it all in 2020, when all the systems that were already broken in 2016 are more broken. Democrat's reluctance to pull the fire alarm and leap to action in defense of democracy shows they have not learned and adapted. Speaker Nancy Pelosi's refusal to call for impeachment of the president and her hope to save the country with a decisive 2020 presidential victory, Lithwick suggests, is sheer naiveté.

What is happening in Washington, D.C. is happening in states across the country as well. Tennessee Republicans are "pushing broad new restrictions on large-scale voter-registration drives," writes Jamelle Bouie. In contravention of voter's wishes expressed by state constitutional amendment last fall, Florida Republicans are legislating new barriers to ex-felons voting. Mitch McConnell may have stolen a Supreme Court appointment from Barack Obama, Bouie wrote in April:

But Republican lawmakers in several states have gone even further, using legislative majorities to strip constitutional authority from newly elected Democratic executives. Republicans in Kansas introduced legislation earlier this week that would strip the recently elected Democratic governor, Laura Kelly, of her power to fill vacancies in top state offices.

In Wisconsin and in Michigan, Republicans passed laws aimed at preempting incoming Democrats on the council of state from undoing damage outgoing Republicans had wrought before them.

What is happening in Kansas and in Michigan and in Wisconsin under GOP-controlled legislatures continues in North Carolina under a Democratic governor. Republicans attempt to place laws they support beyond the reach of veto and judicial review. The principle of separation of powers, checks-and-balances, is not dissolving visibly into Marvel dust, but dissolving, nonetheless. Not only inside the Beltway but across the several states.

It's clear, Bouie concludes, "conservative Republicans have decided that their agenda cannot survive fair competition on equal ground." If they cannot win under existing rules, they will rewrite the rules. Even rewrite the rules they have already rewritten, as happens in the Tar Heel State.

We now return you to the constitutional crisis already underway. If Speaker Pelosi has a Captain Marvel pager handy, now is already past time to activate it.