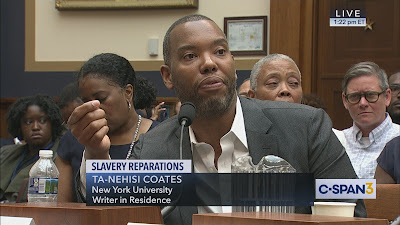 “I want y’all Congress people to deal with issues of economic structure,” economist Julianne Malveaux told a House Judiciary subcommittee on reparations Wednesday. The House is for the first time considering H.R. 40, a bill that would that would create a commission to examine ways to redress the lasting effects of slavery. Titled, “Commission to Study and Develop Reparation Proposals for African-Americans Act,” the bill is sponsored by Representative Sheila Jackson Lee (D-Texas). Retired congressman John Conyers Jr. of Michigan sponsored the bill every year for thirty years until his retirement in 2017.

The day's star witness, writer Ta-Nehisi Coates, took to task Senate Majority Leader Mitch McConnell (R-Ky.) over saying, “I don’t think reparations for something that happened 150 years ago for whom none of us currently living are responsible is a good idea.” Coates' 2014 “The Case for Reparations” in The Atlantic laid bare the enduring legacy of institutional descrimination that continues in America to this day, over a century and a half after the close of the Civil War that ended slavery in America.

Coates challenged the notion that living generations bear no responsibility for the predations of their ancestors. The United States honors treaties dating back hundreds of years before anyone alive today was born. The nation paid pensions to the heirs of Civil War soldiers well into the 20th century. For a hundred years after actual slavery was abolished, de facto slavery persisted in a political and economic system of discrimination that lasted, and lasts, well into the lifetime of Majority Leader McConnell.

Directly or indirectly, slavery accounted for almost half the economic output of the United States by 1836. BY the time of Emancipation, slaves "comprised the largest single asset in America: $3 billion in 1860 dollars, more than all the other assets in the country combined." Their death, misery, torture, and uncompensated labors are foundations of this country's wealth. Yet, a century and a half later, black families still do not share in it:

Advocates for reparations say their cause is misunderstood, and emphasize that it does not necessarily mean the government would be writing checks to black people, though Mr. Coates said he was not opposed to the idea.

Rather, they say, the government could offer various types of assistance — zero-interest loans for prospective black homeowners, free college tuition, community development plans to spur the growth of black-owned businesses in black neighborhoods — to address the social and economic fallout of slavery and racially discriminatory federal policies that have resulted in a huge wealth gap between white and black people.

Coates' remarks are printed in full here and appear in the video below. An excerpt:

What they know, what this committee must know, is that while emancipation deadbolted the door against the bandits of America, Jim Crow wedged the windows wide open. And that is the thing about Senator McConnell’s “something”: It was 150 years ago. And it was right now.

The typical black family in this country has one-tenth the wealth of the typical white family. Black women die in childbirth at four times the rate of white women. And there is, of course, the shame of this land of the free boasting the largest prison population on the planet, of which the descendants of the enslaved make up the largest share.

Beyond the economics, even now vigorous efforts are underway to ensure the continued political marginalization of Americans whose descendants arrived here in chains as cargo. Indeed, they remain an underclass, a legacy of systematic discrimination and oppression to which white people are blind. Only recently has cell phone video of encounters between black men and police officers made visible the America black people experience is not the one that protects and serves white America.

Sen. Cory Booker (D-N.J.) told the House subcommittee, “We as a nation have not yet acknowledged and grappled with racism and white supremacy that has tainted this country’s founding, and continues to persist in deep racial disparities and equalities today.”

The legacy of slavery, as Malveaux hinted, is not only the product of racial animus, but of the brand of capitalism that turned humans into chattel. Slavery may be outlawed, but the economic system that spawned it remains. Perhaps for the first time, it will dawn on members of the new, white underclass that the system that once succored them has, in its color blindness to any hue but gold, made them unlikely allies with descendants of slaves. Then again, that dawning may still be far off.