Hearts of darkness by @BloggersRUs 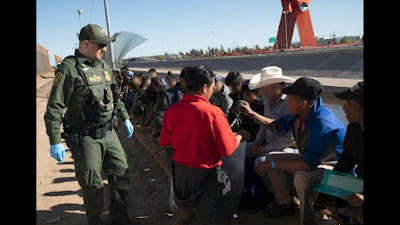 Eyes otherwise fixed on the Strait of Hormuz Friday night caught this dispatch from a western hemisphere heart of darkness:

Children as young as 7 and 8, many of them wearing clothes caked with snot and tears, are caring for infants they’ve just met. Toddlers without diapers are relieving themselves in their pants. Teenage mothers are wearing clothes stained with breast milk.

Conditions at Customs and Border Protection's dangerously overcrowded "camps" (we'll get to that) on the southern border with Mexico continue to deteriorate. Over "45,000 people from 52 countries," refugees, have arrived over the last three weeks, the New York Times reports. Conditions are, to use a loaded word, deplorable. Gov. Greg Abbott of Texas on Friday condemned national leaders in Washington for their inaction, “Congress is a group of reprobates for not addressing the crisis on our border.”

Department of Justice lawyer Sarah Fabian argued before a panel of judges whether "safe and sanitary" conditions required for refugee centers under the Obama-era Flores Settlement Agreement was so vague as to be unenforceable. Provide refugee children with soap and toothbrushes? Where does it end?

“And [it’s] at least obvious enough so that if you’re putting people into a crowded room to sleep on a concrete floor with an aluminum foil blanket on top of them, that doesn’t comply with the agreement,” he said. “I mean, it may be that they don’t get super-thread-count Egyptian linens. I get that. But the testimony that the district court believed was, it’s really cold — in fact, it gets colder when we complain about it being cold. We’re forced to sleep crowded with the lights on all night long.”

And much, much worse:

At another Border Patrol station in McAllen, Texas, attorney Toby Gialluca said all the children she talked to last week were very sick with high fevers, coughing and wearing soiled clothes crusted with mucus and dirt after their long trip north.

"Everyone is sick. Everyone. They're using their clothes to wipe mucus off the children, wipe vomit off the children. Most of the little children are not fully clothed," she said.

How do these people sleep at night? pic.twitter.com/ZS7DTegCI3


Conditions on the border led Alexandria Ocasio-Cortez (D-N.Y.) to declare that “the United States is running concentration camps on our southern border.” Fellow lawmaker Liz Cheney (R-Wy.) took her to task, suggesting Ocasio-Cortez demeaned the 6 million Jews exterminated in the Holocaust. But what really offended Cheney was the use of United States and concentration camp in the same breath.

The challenge the term and camp conditions pose is to American exceptionalism, the jingoistic notion that America stands morally head and shoulders above the rest of the world and its peoples. Where the world is broken and imperfect, we alone can fix it. It is an article of civic faith to which politicians of both major parties have long cleaved.

Embedded in exceptionalist discourse is the belief that, because America has a special devotion to democracy and freedom, its sins are mostly incidental. The greatest evils humankind has witnessed, in places such as the Nazi death camps, are far removed from anything Americans would ever do. America’s adversaries commit crimes; America merely stumbles on its way to doing the right thing.

That the term concentration camp predates WWII is irrelevant to Cheney. Invoking it demeans the United States in the same way the word torture mischaracterizes what her father and the Bush administration did to prisoners in the Global War on Terror. It was not torture. It was enhanced interrogation. Get it right. The Trump administration is not holding mass numbers of foreign children in concentration camps. They are “tender-age facilities.” The choice of what we call them, Masha Gessen adds, is between choosing to believe what we do is by definition acceptable "and thinking that some actual events in our current reality are fundamentally incompatible with our concept of ourselves."

Chris, I think they're concentration camps. Keep in mind that one of their functions *by design* is to punish those individuals and families who are detained. So even the "charged" term is appropriate.


Gauzy fiction for some. For others, lived reality. Actor George Takei backed up Ocasio-Cortez, tweeting, "I know what concentration camps are. I was inside two of them, in America. And yes, we are operating such camps again." Those were internment camps, George. Get it right.

In the face resurgent white supremacism and the xenophobic fear-mongering of the Trump era, Ocasio-Cortez and other millennials are challenging exceptionalist dogma in a way not seen since the Vietnam War, writes Beinart. Terrorism is a term Americans reserve for others, not for ourselves, and especially not for native-born, white Christains. But even that barrier is breaking down. Representative Tom Malinowski of New Jersey named America's greatest terror threat “white supremacists.”

Torch-carrying Nazis are fine people, Tom. Get it right.

Ocasio-Cortez and others on the Millennial-led left are challenging that separation now. They are challenging not only the physical and legal barriers that Trump is erecting against immigrants entering the United States, but also the conceptual barriers that American exceptionalism erects against seeing the United States as a nation capable of evil. And for Ocasio-Cortez’s critics, removing those ideological barriers is every bit as frightening as allowing migrant caravans to pass unimpeded across the Rio Grande.

Deplorable. Appalling. Reprobates. "This is a dark moment for our country, and history will not be kind to the perpetrators of this cruelty," Sen. Kirsten Gillibrand of New York said. Cruelty was and is the point. We are working on becoming exceptional at it.