Really, is this what it's going to take? by @BloggersRUs

Really, is this what it's going to take? 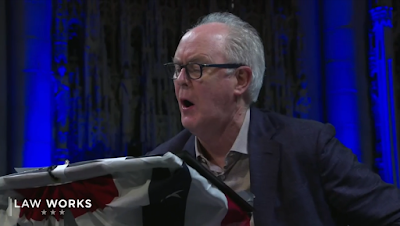 "Oh my God. This is terrible. This is the end of my Presidency. I'm fucked."

"RIPPED FROM THE PAGES OF THE MUELLER REPORT" makes The Investigation: A Search for Truth in Ten Acts sound more ripping than it actually is. Performed live Monday night by an A-list ensemble of Hollywood and Broadway actors, The Investigation features dramatic readings from the 448-page Mueller report most Americans will never read. That includes many members of Donald Trump's own party and the acting president himself. Trump's interview last week with ABC's George Stephanopoulos demonstrated that plainly to anyone familiar with the report's contents.

Adapted by Emmy-nominated playwright, screenwriter, and actor Robert Schenkkan and live-streamed by Law Works, The Investigation joins a growing list of theatrical efforts to make the (redacted) Mueller report more accessible to the general public. The "ten" in the title refers to the 10 specific acts for which special counsel Robert Mueller presents evidence of the president's attempts to obstruct the Russia investigation.


The actors sat behind music stands hung with red, white and blue bunting in New York City’s Riverside Church and stood to read excerpts assigned to them. Annette Bening served as narrator, with John Lithgow drawing occasional laughter for his reading of Trump tweets and statements to associates found in the report. The performance features Kevin Kline as Mueller and Joel Grey as Jeff Sessions. Also appearing are Jason Alexander, Alfre Woodard, Gina Gershon, Michael Shannon among others. In a postscript video, Mark Hamill, Mark Ruffalo, Julia Louis-Dreyfus, and Sigourney Weaver join in summarizing the report's findings.


Theater groups and a media company have already staged a 24-hour reading in New York of the full report, titled "Filibustered and Unfiltered: America Reads the Mueller Report." Arena Stage in Washington, DC, will present Volume 2 of the Mueller report in a planned 11-hour reading. That event will also be live-streamed beginning at noon on July 11.

Mueller explained his team found insufficient evidence to prove the Trump campaign entered a criminal conspiracy with Russia to interfere with the 2016 presidential election. Obstruction of justice was another matter. Mueller detailed 10 of Trump's acts of obstruction for which any other person not the president would face criminal charges, and for which Mueller could not exonerate Trump.

Theatrical efforts to promote the Mueller findings, while noteworthy, add to the sense that not only is the criminal justice system broken and unequal (black Americans know this from everyday experience), but democracy is, too. We await a ruling this week from the U.S. Supreme Court on adding a citizenship question to the census demanded by Republicans insistent on breaking it some more. And another ruling on whether they can make the rubble bounce by further gerrymandering districts they've designed to under-represent minorities.

Hats are off to Rob Reiner and Robert Schenkkan for attempts to draw eyeballs to evidence supporting what any American with a television stands witness to each new day in Trumpistan.

But really, is this what it's going to take to move Congress and American public opinion to reign in a criminal administration led by a developmentally challenged sociopath? Actors? Dramatic readings? Preaching to the choir? Maybe if there were more piledrivers, monster trucks, and special effects.