Refuse to be numbed by @BloggersRUs

Refuse to be numbed 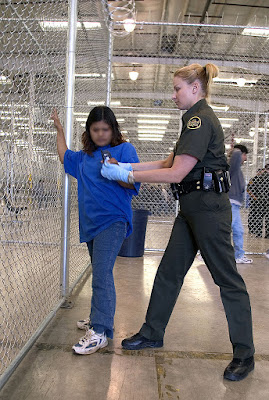 The man on the phone Sunday asked what he could do. Were there any local protests planned? (Yes. He'd just missed one.) He'd read the U.S. is holding immigrant children — migrants, refugees, what have you — in horrendous conditions in U.S. Customs and Border Protection facilities on the border with Mexico. He was upset and feeling helpless. But not likely as helpless as the children themselves.

"The conditions within which they are held could be compared to torture facilities," physician Dolly Lucio Sevier wrote in a medical declaration obtained by ABC News.

"It just felt, you know, lawless," Lucio Sevier said. "I mean, imagine your own children there. I can't imagine my child being there and not being broken."

The New Yorker's Isaac Chotiner spoke with Warren Binford, a law professor at Willamette University, and part of lawyer team that interviewed more than fifty children at a facility in Clint, Texas. One of her stories:

Oh, I know what I wanted to tell you. This is important. So, on Wednesday, we received reports from children of a lice outbreak in one of the cells where there were about twenty-five children, and what they told us is that six of the children were found to have lice. And so they were given a lice shampoo, and the other children were given two combs and told to share those two combs, two lice combs, and brush their hair with the same combs, which is something you never do with a lice outbreak. And then what happened was one of the combs was lost, and Border Patrol agents got so mad that they took away the children’s blankets and mats. They weren’t allowed to sleep on the beds, and they had to sleep on the floor on Wednesday night as punishment for losing the comb. So you had a whole cell full of kids who had beds and mats at one point, not for everybody but for most of them, who were forced to sleep on the cement.

Some of the guards, Binford said, were on the children's side and want the attorneys to be successful. But others are "bad people, and there’s no question about it." Laws governing the care and processing of these children are "being broken right and left," she adds. Many separated children have parents or relatives in the U.S.

Charles Blow reduces the matter to a few sentences:

Folks, we can use any form of fuzzy language we want, but the United States under Donald Trump is currently engaged in an unconscionable act. He promised to crack down on immigrants and yet under him immigrants seeking asylum have surged. And he is meeting the surge with indescribable cruelty.

Donald Trump is running concentration camps at the border. The question remains: what are we going to do about it?

Speak out. Call your representatives in the House and the Senate, no matter their party affiliation. Demand action. Or if your temperament or work schedule precludes calling, you can e-fax them for free 24 hours a day. (Fax numbers for Congressional offices are in a pull-down.)

A Twitter user over the weekend complained her feed was filled with reports about children held in these conditions. Refuse to be numbed.