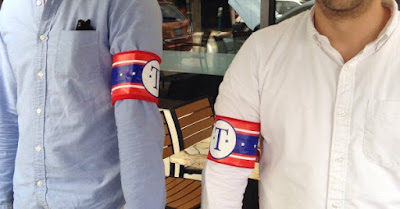 Professional trolls duped Fox News into believing these armbands were real. As early as March 2016, it was an easy prank to pull off.

Wednesday night's Trump rally in Nuremberg, NC — Greenville, sorry — poses an uncomfortable choice: whether to add oxygen to pyre the acting president is making of the American experiment or to examine what one suspects is his proximate motive for taking a rhetorical flamethrower to it.

Since the bulk of posts this morning will focus on Trump adopting "SEND THEM BACK" as his 2020 campaign theme, let's look instead at the timing.

"The trip to Greenville was initially expected to coincide with special counsel Robert Mueller's long-awaited testimony before the House Judiciary and House Intelligence Committees," WRAL reported. With Mueller's appearance delayed until July 24, Trump pivoted to Rep. Ilhan Omar (D-Mich.) and The Squad as his weapons of mass distraction. When Trump condemned the American legislator born in Somalia, the crowd eagerly chanted, “Send her back! Send her back!” The power of it must have given him a thrill up his leg.

But the weekend tweets that began this chapter in one small-handed man's search for a balcony served a purpose not connected to Robert Mueller. Trump needs to shift national focus from the metastasizing Jeffrey Epstein scandal.

Vanity Fair'[s Gabriel Sherman writes "a wave of panic is rippling through Manhattan, DC, and Palm Beach" among Epstein's former friends and associates:

Likely within days, the U.S. Court of Appeals for the Second Circuit will release almost 2,000 pages of documents that could reveal sexual abuse by “numerous prominent American politicians, powerful business executives, foreign presidents, a well-known prime minister, and other world leaders,” according to the three-judge panel's ruling. The documents were filed during a civil defamation lawsuit brought by Epstein accuser Virginia Roberts Giuffre, a former Mar-a-Lago locker-room attendant, against Epstein’s former girlfriend and alleged madam, Ghislaine Maxwell. “Nobody who was around Epstein a lot is going to have an easy time now. It’s all going to come out,” said Giuffre’s lawyer David Boies. Another person involved with litigation against Epstein told me: “It’s going to be staggering, the amount of names. It’s going to be contagion numbers.”

Courtney Wild is an Epstein accuser who gave testimony at his bail hearing. Her attorney told a Tuesday press conference Epstein appears to have spent all his time abusing underage girls. “We have not found anyone who has provided information about a legitimate business he was engaged [in].”

The source of Epstein's fortune is the subject of speculation. As is his purpose for keeping "a pile of cash," a stash of loose diamonds, and a fake foreign passport in a safe in his apartment. Epstein used the passport's phony identity "to enter France, Spain, the United Kingdom, and Saudi Arabia in the 1990s."

Few on Wall Street believe Epstein is a financier as he poses. Sherman explains, "the reigning theory on Wall Street currently is that Epstein’s activities with women and girls were central to the building of his fortune, and his relations with some of his investors essentially amounted to blackmail."

Now, who among Epstein's acquaintances might be easier than most to blackmail?

That, Kathleen Parker suggests, is "the Something Else" Trump doesn't want us to see. So now it's don't look over here, look over there: non-white women from "other" countries who don't like me.

With Epstein facing trial without bail and life in prison, with more than 50 women threatening to tell all under oath, watch closely for signs of Department of Justice shenanigans aimed at shielding the acting president and his powerful friends either by somehow quashing the investigation or by delaying it until after the 2020 election. Epstein-Barr could take on new meaning.

In a place Trump cultists keep well hidden, there may yet be a vestigial organ of conscience to go with their Christian affectations. But after last night's rally, don't expect the Epstein scandal to awaken it.