How Christian is he? by @BloggersRUs

How Christian is he? 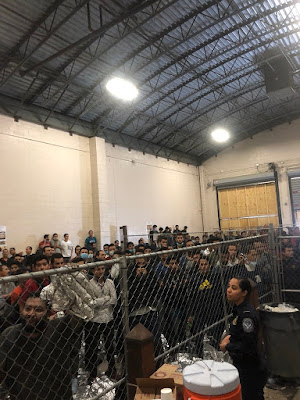 Vice President Mike Pence toured two migrant detention facilities in Texas on Friday along with pool reporters. The first, in Donna, Texas, was two months old and cleaner, giving Pence the opportunity to go after Democratic critics for calling the facilities "concentration camps."

The second in McAllen? Well....

MCALLEN, Tex. — When Vice President Pence visited a migrant detention center here Friday, he saw nearly 400 men crammed behind caged fences with not enough room for them all to lie down on the concrete ground. There were no mats or pillows for those who found the space to rest. A stench from body odor hung stale in the air.

When reporters toured the facility before Pence, the men screamed that they’d been held there 40 days, some longer. They said they were hungry and wanted to brush their teeth. It was sweltering hot, but the only water was outside the fences and they needed to ask permission from the Border Patrol agents to drink.

Pence appeared to scrunch his nose when entering the facility, stayed for a moment and left.

“I was not surprised by what I saw,” Pence said later at a news conference. “I knew we’d see a system that was overwhelmed.”

He added: “This is tough stuff.”

VP saw 384 men sleeping inside fences, on concrete w/no pillows or mats. They said they hadn’t showered in weeks, wanted toothbrushes, food. Stench was overwhelming. CBP said they were fed regularly, could brush daily & recently got access to shower (many hadn’t for 10-20 days.) pic.twitter.com/tHFZYxJF7C

The men said they were hungry and wanted to brush teeth. Most didn’t speak English but gestured at us. CBP said three meals are brought in a day & they can brush daily. Stench was horrendous. CPB said it is cleaned 3x a day. Heat was sweltering. CBP said it was air conditioned.


This is one of those situational ethics affairs in which public Christians eager for government to enforce their religious views against others typically rediscover rendering unto Caesar that which is Caesar's. When it serves their needs to insist the U.S. is a Christian country whose constitution Jesus himself helped draft, professing the primacy of Christian morality is in order. When their xenophobic agendas require them to crack down on strangers in their land, suddenly separating church and state is conservative common sense.

We've already seen what kind of compromises Pence is prepared to make — and what dogs he's prepared to lie with — when his ambition is more important to him than his faith. No on should hold their breath for him to take a Christian stand now.