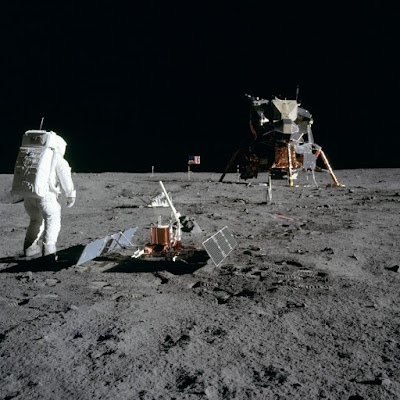 Fifty years ago today, landing on the moon became a benchmark for human achievement. The world held its breath in those last moments as the Eagle lander, seconds worth of fuel left, settled onto the lunar surface.

Charlie Duke at mission control replied, “Roger Tranquility, we copy you on the ground. You got a bunch of guys about to turn blue. We're breathing again. Thanks a lot.”

The United States had achieved President John F. Kennedy's bold vision of humans landing on the moon before the end of the 1960s. We would return them home safely. Thereafter, "If they can land a man on the moon" became both a declaration of human achievement and a demand we solve other insurmountable problems through the same American hard work, grit and ingenuity. We are still waiting for a president to lead a climate change moon shot.

Fifty years later, we've got a boatload of problems and a nation in retrenchment led by an ignorant, racist xenophobe and a coward. Add to that, he is a small-minded, white-nationalist demagogue with a DSM's worth of instability. Worse still, he has a following numbering somewhere around 40 percent of U.S. voters.

In 1969, inspired by Kennedy's vision and rivalry with the Soviet Union led by Russia, Americans dreamt of reaching for the stars. Fifty years later, a large percentage are eager to follow the acting president into the abyss.

Fifty years later, Russia is still an American adversary. But having lost the race to the moon and its empire, Russia has chosen to boost its global stature not through inspiring human achievement, but by working to collapse its rivals through stealth, burglary, and industrial-strength lies. The acting U.S. president is eager to play along.

The problem of perfecting this union (as well as protecting it against malicious adversaries) is not our technology but our lack of wisdom and garden-variety human foibles. Hugo and Nebula Award winner Mary Robinette Kowal issued a Twitter thread Friday explaining that for all the technical wizardry behind space travel we have yet to satisfactorily solve the problem of peeing and pooping in space.

For all our chest thumping about 'Murica and freedom, e pluribus unum remains beyond the grasp of many of our fellow citizens. Anyway, the phrase is foreign, dontcha know.

The Atlantic's Adam Serwer examines the challenge of addressing the white nationalism stoked by the acting president and abetted by a supine Republican Party. Specifically, he addresses this week's speech in Greenville, NC in which the acting president's audience chanted “Send her back! Send her back!” about Rep. Ilhan Omar (D-Minn.), a Somali immigrant serving in Congress. Trump primed the crowd for the chant by suggesting four freshmen women of color (including Omar) should go back to the countries they came from. The other three are native-born Americans.

For all the ugliness in the history of this republic, "America has not been here before," Serwer writes:

Ilhan Omar’s prominence as a Republican target comes not, as conservatives might argue, simply because her policy views are left-wing. Neither is it because, as some liberals have supposed, she is an unmatched political talent. She has emerged as an Emmanuel Goldstein for the Trumpist right because as a black woman, a Muslim, an immigrant, and a progressive member of Congress, she represents in vivid terms a threat to the nation Trumpists fear they are losing.

To attack Omar is to attack a symbol of the demographic change that is eroding white cultural and political hegemony, the defense of which is Trumpism’s only sincere political purpose. Many of the president’s most outrageous comments have been delivered extemporaneously, when he departs from his prepared remarks. Last night, though, his attacks on Omar were carefully scripted, written out by his staff and then read off a teleprompter. To defend the remarks as politically shrewd is to confess that the president is deliberately campaigning on the claim that only white people can truly, irrevocably be American.

Serwer argues for defending Omar, whatever her politics — "you needn’t like her at all" — "because the nature of the president’s attack on her is a threat to all Americans—black or white, Jew or Gentile—whose citizenship, whose belonging, might similarly be questioned."

Today we celebrate a monumental human achievement from half a century ago. The courage, commitment and science that adventure required has yet to be rallied to cleanse the darkness in human hearts. The acting president has no interest in addressing that problem. for him, it is not a problem, but an asset to be exploited. While not clairvoyant, I might venture his own heart is darker than most. As a fictional president said of a rival a quarter century ago, whatever the problem is America needs solving, Donald Trump is uninterested in solving it. "He is interested in two things, and two things only: making you afraid of it, and telling you who's to blame for it."

"If multiracial democracy cannot be defended in America," Serwer concludes, "it will not be defended elsewhere. What Americans do now, in the face of this, will define us forever." That is on us. "If they can land a man on the moon," perhaps we may yet save this republic from this ugly nationalism. Yet, we still can't figure out how to poop cleanly in space. God help us we are forever defined by the shit left behind by Donald J. Trump.