The only thing we have to fear is no excitement 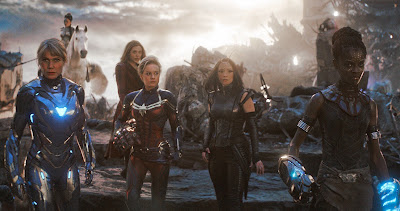 Democrats don't need to run for president on better policy, though they have that. Their candidate needs to generate excitement among traditional nonvoters. More than whip fear of what another Donald Trump term could mean for the fate of this democracy, to win a decisive victory from the top of the ticket to the bottom, they need to give nonvoters something to vote for.

Tim Wise's viral Twitter thread last weekend argued that if Democrats lose the election it will be because they treat this contest as just another policy debate. He told MSNBC's "Hardball" Monday night (emphasis mine):

When you are dealing with a movement that focuses on [white racial resentment], in a sense, a white identity cult, to act like they are just another candidate, to say, well, yeah you, know he's sort of racist and that was really racist what he did, but look at my policy to make college affordable, or look at my better healthcare plan that's going to be so much better than his, is to miss the point.

With [David] Duke what we learned is you have to make this a moral message that Dukeism — and I would say now Trumpism — pose an existential threat to the values that Americans hold dear. So in other words, when they say that The Squad hates America, no, no, no, your movement hates America as an idea, an idea of multiculturalism, of pluralism, and of democracy. That's the only way we're going to motivate the base. It's the only way we're going to get reasonable moderates and conservatives who probably are never going to agree on policy with the candidates Democrats have, but they can come together on the basis of a moral message and we can live to fight another day about the issues that we care about once the Democrat has defeated Donald Trump.

"One of the things we learned dealing with (David) Duke ... but they appeal to white racial resentment as the yeast that makes their political bread rise."@timjacobwise on how he helped defeat David Duke in the 90s and how those lessons apply to Trump. #Hardball pic.twitter.com/TeuqBSjF7L

Bishop William Barber of the Poor People's Campaign argued on MSNBC's "All In" that the message Democrats need to emphasize is a moral one, that the Trump administration's policies are hurting not only people of color, but poor, white Americans. [timestamp 4:50] They must not ignore the racist behavior in favor of discussing health care policies, etc., but expose the moral truth about the effects of Republican policies.

Wise sees a threat to the republic. Barber sees policy cruelty. Both emphasize the need for a moral message to motivate the base. Yet, Democrats in leadership want to run in 2020 as if it is the 1990s again and they can activate their base with white papers.

Wise's argument is not wrong, nor is Barber's. But fear alone won't deliver a decisive victory, nor will it inspire the down-ballot wins Democrats needed to regain control of Republican-held state legislatures and 2021 redistricting. The emphasis on what will turn out the Democrats' base misses a crucial point. Nonvoters are predominantly younger. Democrats err if they count among their base youth who don't vote.

The Democrats' moderate wing has been playing "don't make Daddy angry" politics for decades. The defensive mindset behind their election strategy is hold the base, don't make them uncomfortable, and turn them out.

What they should laser-focus on instead is bringing in the growing, voluminous ranks of young people and independents under 40 WHO DON'T VOTE because too many Democrats 1) don't look or sound like them, 2) won't fight for them, and 3) haven't made them the focus of campaign outreach.

Sen. Bernie Sanders went far in 2016 with his $27 donations and free college tuition pitch to younger voters. Aging GOP voters follow Trump because they think he's fighting for them. But he promised to stick it to the elites and passed tax cuts for them instead. That sentiment is still there. On the left, Sen. Elizabeth Warren really means to do what Trump only teased.

Younger nonvoters need champions like these to give them a reason to register and turn out. It must be terrifying graduating into the economy that, as Warren says, works fine for the top one percent, but not for everybody else. Rep. Alexandria Ocasio-Cortez ended up bartending and waiting tables. Her cohort could care less about Medicare drug prices. But they care an awful lot about their own health care, the environment, and the size of their stagnant paychecks.

Wise sees an "existential threat" to the republic and he's not wrong. But nonvoters under 40 who feel they have no "skin" in this system won't turn out to save it because their elders see the future threatened. Nonvoters already don't have one, and with persistent inaction on climate change, little reason to fight for a bleak one. Democrats need to give them a future worth fighting for and heroes to lead them.

I created his chart last fall of the state population by age, of who voted early and who did not. It continues to haunt me. North Carolina is not atypical. Younger voters have the power to remake this country ... if they will reach out and take it. But they need reason to. 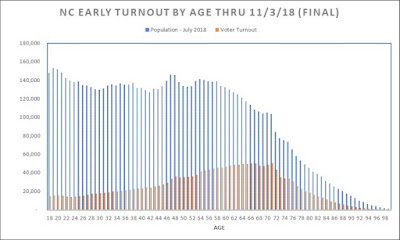 Trump cultists follow the acting president because, as empty an ill-fitting suit as he is, he presents as bold and in-your-face. To them that looks like leadership. No wonder the right is apoplectic about The Squad. The GOP has trained a generation of Democrats and reporters to cower. They don't know how to handle Democrats who refuse to play their assigned roles as punching bags. With their social media savvy, youth and attitude, The Squad could be ambassadors to under-40 nonvoters.

Among the many nuggets in the just-dropped CPS data on the 2018 election:

The future (of voting) is apparently female. pic.twitter.com/tU3OOK0vSb

Obama easily won the youth vote nationally, 67 percent to 30 percent, with young voters proving the decisive difference in Florida, Virginia, Pennsylvania and Ohio, according to an analysis by the Center for Research and Information on Civic Learning and Engagement at Tufts University. Obama won at least 61 percent of the youth vote in four of those states, and if Romney had achieved a 50-50 split, he could have flipped those states to his column, the study said.

About half of all eligible people ages 18-29 voted in Tuesday’s election, roughly the same level as 2008, according to Peter Levine, the center’s director. The youth vote’s share of the electorate actually increased slightly from 18 percent to 19 percent. In total, 22 million-23 million young people voted, according to the analysis.

They didn't register and turn out in 2008 and 2012 because of Obama's policies. They did it out of passion for someone who seemed to embody a better, more hopeful future. Fear of Trump may drive older voters to the polls, but fear alone won't do that for citizens who are eligible to vote but see no reason to. Yet, we plunk down billions to see superheroes save the planet and/or the galaxy. Who among the Democratic presidential candidates might generate enough excitement to inspire them to save the republic?