What he says and what he really means by @BloggersRUs

What he says and what he really means 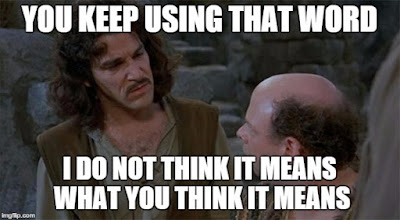 Proving again he is the loud guy holding forth at the end of the bar, our acting president told his “social media summit” Thursday (emphasis mine):

“See, I don’t think that the mainstream media is free speech either because it’s so crooked. It’s so dishonest. So to me, free speech is not when you see something good and then you purposely write bad. To me, that’s very dangerous speech, and you become angry at it. But that’s not free speech.”

What he really means is speech that flatters him (and reporters who fawn over him), that's free speech. That deserves 1st Amendment protection. The rest, not so much.

Today, I am directing my Administration to explore all regulatory and legislative solutions to protect the free speech rights of ALL AMERICANS. We hope to see more transparency, more accountability, and more FREEDOM! #SocialMediaSummit https://t.co/i6th5qtfAj

THis is why a poll found nearly 50% of Trumpers would support Trump if he closed down media outlets for being unfair to Trump: Trump Says It's Not Free Speech to 'Write Bad' About 'Something Good': That's 'Dangerous Speech' https://t.co/gOwTtWlLbH via @mediaite

This is one of those statements that would be shocking if made by any normal president but is almost banal with Trump. He barely disguises his admiration for dictators and their freedom to murder journalists who displease them. While his own powers of suppression are far weaker, Trump is happy to use government authority to punish independent media (like CNN and the Washington Post, whose owners he has punished with unfavorable regulatory actions) and even individuals. (Trump has boasted that he personally enforced the NFL blacklist of Colin Kaepernick for the offense of kneeling during the national anthem.)

Trump’s invocation of “free speech” is consistent: His entire goal is to promote supportive views and suppress hostile ones. And the willingness of virtually the entire conservative movement to support or tolerate his cynical conscription of free speech to intimidate the media reveals how little it, too, cares about freedom.

Among the things Trump and his cult do not understand are such diverse elements as....