What would video of Kavanaugh’s hearing prep reveal? @spockosbrain

What would video of Kavanaugh’s hearing prep reveal?

I just watched the NBC video from 1992 of Trump and Epstein at a party talking and laughing with cheerleaders.  I wondered, "What other videos that seemed innocuous at the time, are now dangerous to people in power?" Video of conversations that didn't seem important at the time could now be evidence of a decision made, an action taken, a personal connection verified or proof of a lie. 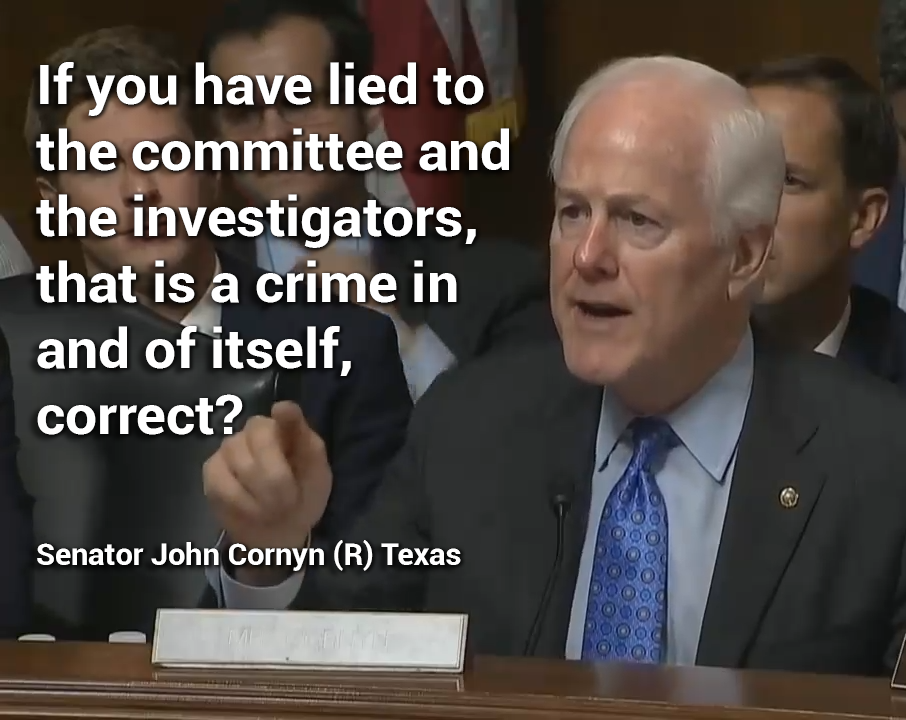 In the face of videos of horrible crimes like child rape, we forget that sometimes plan old videos of powerful men and their enablers talking and planning actions they consider normal can be used against them.

I was reminded of these kind of videos following the This American Life episode "The Wannabes." It was about democratic candidates on the road in Iowa preparing for the debate. The show described how Julián Castro and team spent days doing debate prep.  You know what else is like debate prep? Senate confirmation hearing prep.

The show covered the process:


Ira Glass
Some candidates just end up getting five minutes. So you have limited time, and you have no idea what they're going to ask you about. And so you have to prepare perfect, pithy answers for every imaginable question.

Ira Glass:  They spend hours doing this. It's tedium chewing over how to best fill those precious eight minutes they're going to get.   Link to video of audio clip.


The campaign staff and communications director figure out what questions might be asked, the candidate gives an answer and everyone evaluates it. Is it pithy? Does it have key messages? Will it connect with people? They record the answers and play them back to see if it works. If not, they start over with an answer that works.

Preparing for senate confirmation hearing involves the same process, with the added weight that what is said will be under oath. Multiple papers have described the hearing prep for Kavanaugh. Seung Min Kim and Josh Dawsey of The Washington Post wrote a piece Inside the GOP's effort to save the Kavanaugh nomination describing the dozens of people involved. The names of some lawyers, politicians, spokespeople and White house staff were listed, but there must have also been interns, personal assistants and audio visual staff involved.

That leads me to conclude that there are probably video recordings of Kavanaugh preparing for his confirmation hearing.
They could contain evidence that Kavanaugh is a serial liar. Evidence of that is important. During the hearing Republican Senator John Cornyn of Texas goes to great pains to point out that if they find out Kavanaugh was a serial liar they shouldn't confirm.

It doesn't matter which lies Kavanaugh tells, it's that he lied. And he lied during confirmation hearings.

I watched the hearings and read a lot of analysis of them.  Eric Alterman wrote a piece for The Nation where he said, "would-be Supreme Court justice Brett Kavanaugh repeatedly perjured himself." He links to fact checking stories in The New York Times and Washington Post. The Boston Globe comes right out and says, "Make no mistake: Brett Kavanaugh’s a liar."  But most papers, and the senators involved during the hearing, were very careful to not call him a liar.

Watching Kavanaugh answering a question about the meanings of words made it clear that he rehearsed his answers. Calling Kavanaugh a liar under oath would involve demonstrating he knew the truth and decided to lie. 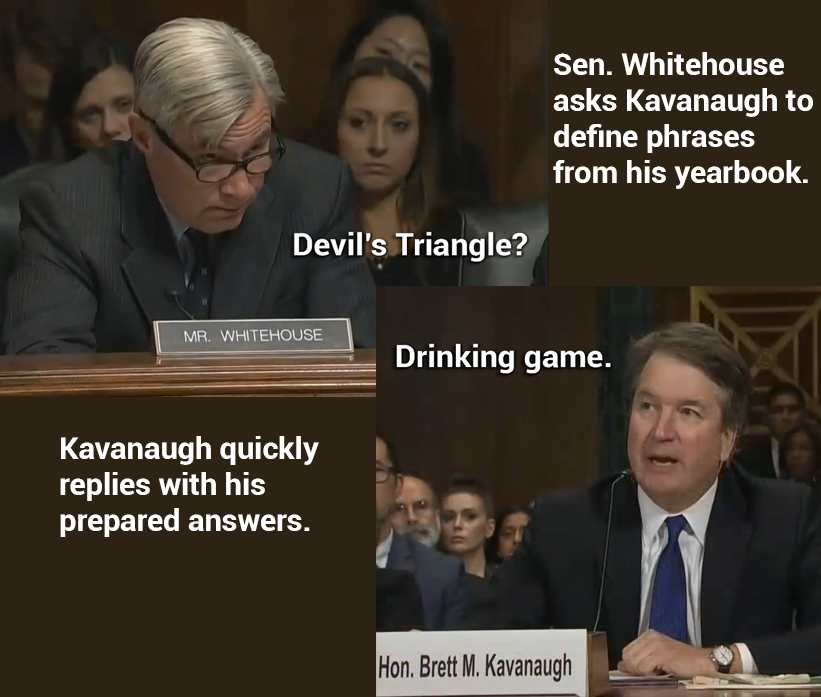 Here is where video of the preparation and rehearsal could be important. It could be proof of Kavanaugh's understanding of the phrases ralphing, boofing, Devil's Triangle and Renate Alumnus Club as they meant to him and others at the time, followed by him willfully answering with something else which he did not believe to be true.

Multiple people probably coached Kavanaugh on his answers. We know White House press secretary Sarah Huckabee Sanders, deputy press secretary Raj Shah and communications director Bill Shine were all involved. Shine’s presence was noteworthy, considering he was ousted from his previous job at Fox News in part due to his handling of sexual harassment claims at the company.

This American Life documented what thousands of politicians go through to prepare for a debate. I'm going to speculate how the Q&A for early prep sessions went, based on my experiences prepping  people for press conferences, TV and radio shows, financial conference calls and presentations. Then I'll link to video of the actual answers given by Kavanaugh during the hearings.


[Setting: A meeting room somewhere on the 2nd Floor of the West Wing]
Senator Whitehouse's stand-in: What did your friends mean when they talked about oofing?

Possibly Sara Huckabee Sanders: They are trying to make the narrative about you being a drunk rapist. We don't want you to give any answers that talks about sex, booze or memory loss. So, what else could boofing mean that involves teasing your buddies and involving butts? How about farting? That would be consistent with the time and would probably get a laugh. Now answer the question again, only this time say it involves flatulence. And be sure to bring up that you were 16.

Now Whitehouse couldn't call Kavanaugh a liar when he first heard the flatulence definition because maybe it was one used by those boys. But a video tape or interview with the people in the prep session, speaking under oath, could show how they worked to purposefully misrepresented the meaning of multiple important words and phrases, with the knowledge that they were false. Kavanaugh would benefit if the senate believed the serial lies and acted by voting to confirm him.

Reasons we are told impeaching Kavanaugh is impossible

His lawyers are too smart
The prep team, filled with lawyers, would know that it would be difficult to prove Kavanaugh made a false statement or perjured himself, especially if there was no evidence of his intent.  It would be difficult to verify what a term meant at the time among this small group, only one of which would be testifying. Dictionary's often have multiple definitions for words like ralph. The questioners would have no way to prove that regional slang or an in-jokes didn't mean what they said it meant.

Questioning other people about what they knew the term to mean takes time, it would be their understanding, not Kavanaugh's so any terms would still be open to his interpretation.

Also, the $1,400 dollars an hour lawyers will try to ensure no congressional committee sees any video. Bill Barr will try to claim Executive Privilege. Every lawyer involved will make Kavanaugh his client so advice and conversations could be covered by attorney client privilege.

The White House is behind him
But here's the thing, these answers were created on the fly for Kavanaugh to serve a specific narrative. His performance was designed to act like Trump demands his nominees act. Kavanaugh could not follow the "apologize, acknowledge mistakes and move on" method people thought a judge should.  He used Trump's "deny, lie and attack" method.  Using other peoples' definitions of certain phrases instead of what he knew to be true, showed up as false in his delivery. Not everyone can lie as easily as Trump. But the delivery at the hearing isn't evidence of the deceit or the intent. That is what the video of the prep could show.

Any video was destroyed or never existed
I try not to underestimate the cunning of this gang of thieves. But I also know that people around them know how to protect themselves when dealing with liars and con-men. Remember Omarosa's unauthorized recording her firing in the situation room?

Would recordings of the prep in the White House fall under the of Presidential records act? Will they be mysteriously deleted by the ghost of Rosemary Woods?

Powerful people have and control any videos
There is a reason Epstein got a obscenely light sentence for child rape and human trafficking.  He had, and controlled, the videos of people doing and saying things they didn't want others to know about.

Recordings are leverage. People with leverage, like Hope Hicks, negotiate jobs and get their lawyers paid for. Other people get paid off or threatened if they speak out.

What you see isn't real. Fake News!
If the video makes it to the media, the professional spinners will be unleashed. "This is normal. No crimes were committed. It's just a difference of opinion yada, yada, yada."  Then expect dozens of people to start talking about how they played Devil's Triangle while farting during the 80's.

We don't have to go back to 1982 to get evidence of Kavanaugh lying about the meaning of words during his high school years. It's on a video made in 2018.

But the prep video wouldn't be the only evidence of Kavanaugh as a serial liar. First there was this story in Slate from my friend Lisa Graves, Judge Brett Kavanaugh should be impeached for lying during his  confirmation hearings.

Pema Levy and Dan Friendman wrote about all the "pesky documents that keep surfacing to contradict the nominee’s claims about his past" in Mother Jones. Five Times Brett Kavanaugh Appears to Have Lied to Congress While Under Oath

Elie Mystal, wrote in The Nation, The Time Has Come for Democrats to Impeach Brett Kavanaugh. about his ethics complaints and questions about his debt.

Republican Senator Cornyn gave a speech about the need for evidence from accusers.

This administration knows about the power of video. That is why they stop people from testifying in public in front of congress. That's why Don Jr. had a closed door hearing. They have strategies to suppress tapes like The Apprentice N-word tapes. When they can't suppress the tapes, they have strategies to attack the meanings of words, or dismiss the obvious intent. We've seen videos of the president saying horrible things followed by people going on TV and telling the world that what they saw and heard is not really what they saw and heard.

Sometimes we need video. Writing can't carry the nuance, vocal inflection, body language and emotion of a video. You can read the words on paper, but when you hear and see people rehearsing them over and over again, you will be able to see the willfulness and hear the intention to lie.

Who has the videos of Kavanaugh preparing for his hearing and what will they reveal? The White House won't turn over anything without a fight, but congress still has subpoena power and the democrats are in charge. We have a President who thinks he's covered because of Kavanaugh on the Supreme Court, but we can change that equation before his case gets to the Supreme Court.