2020: It's the Trumpism, stupid by @BloggersRUs 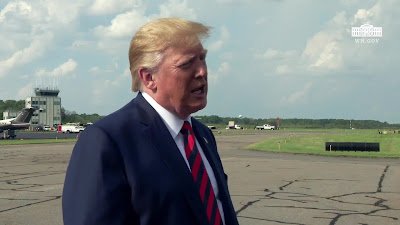 "So I think the concept of mental institution has to be looked at."

Rachel Bitecofer's prediction on the 2018 "blue wave" was "numerically close to perfect," writes Paul Rosenberg in an interview for Salon. The assistant director of the Judy Ford Wason Center for Public Policy at Christopher Newport University in Newport News, Virginia estimated Democrats would gain 42 seats. The do-over election in NC-9 scheduled for September 10 could make Democrats' final count 41. On August 6, Bitcofer released a preliminary list of 18 House seats that with the right campaigns Democrats could pick up in 2020.

Her explanation for the size of the tsunami contrasts with conventional wisdom still on display among Democrats in Washington.

Bitecofer tells Salon, "I don't know why Nancy Pelosi, the DCCC or many of these moderate members are convinced that moderate Republicans crossed over and voted for them. I have the data for some of these districts and the data tells a very different, very clear story: If Republicans voted in huge numbers, they voted for Republicans."

And Republicans did turn out in large numbers. Turnout among Democrats and independents was simply higher. What made them turn out was not health care, but negative partisanship. It was Trump, Inc. By Bitecofer's reckoning, not understanding the effects of that on turnout may have cost Democrats an additional half dozen seats they may have successfully contested in 2018.

She writes in her August 6 posting (emphasis mine):

Although Trumpism has been an effective rallying cry for the GOP base, it has galvanized a previously complacent part of the electorate; white, college educated millennial women as well as all voters under age 40, who represent a far more diverse and liberal voter universe than their older counterparts. As such, any district with high levels of college educated voters was extremely vulnerable for Republicans in 2018, even those that had long been in the hands of the Republican Party such as the six Orange County districts in Southern California which my model was quite clear would uniformly flip to the Democrats.

Two takeaways from Bitecofer's Salon interview. First, the percentage of college-educated voters in the district. Bitecofer explains, "we have college-educated voters moving towards the Democrats, and white working-class voters moving away from them." And in suburban districts, that trend advantages Democrats. Basically, the electorate model is shifting.

I'm also able to show that even in these districts where Democrats ran Blue Dog candidates who were as unobtrusive as possible — with, exactly as you stated, the goal of not riling up Trump voters — the turnout for Republican voters in those districts was huge.

In fact, not only did Democrats not get the benefit of not stirring up the Trump base — the Trump base was stirred up and showed up in huge numbers — but by not tapping into anti-Trump sentiment in their own campaign strategy, by not intentionally activating that Trump angst, they paid a price in terms of their own base turnout. It was depressed, compared to other districts.

Nine of the House seats on Bitecofer's preliminary list are in Texas, making it "Ground 0 of the Democrats’ 2020 efforts." That points up another weakness in Democratic strategies. Bitecofer explained August 6:

However, actually flipping these districts would require a massive investment in an area Democrats have continually under-invested in: Latino turnout. Democrats’ success in increasing the size of their House majority will largely depend on whether they come to recognize the need to maximize turnout among Democratic-friendly constituencies such as college-educated women, Latinos, African Americans, and Millennials and in their ability to understand that it is fear of Trump, not policy, that will best motivate these voters to the polls, no matter what the voters themselves may think.

Which is to say candidates' policy proposals are simply icing on the cake. Democrats need to make 2020 a referendum on Donald Trump. Bitecofer's July 1 projection for next year showed Democrats winning 278 electoral votes, eight more than necessary to secure the election, with several swing states still in play. But it is a long way to November 2020.

A key overlap across all those sub-groupings Bitecofer mentions is voters under 40, be they college-educated women, Latinos, African Americans, etc. That is where the nonvoters are, nonvoters with the numbers to control this country's destiny and perhaps the world's. Given the increasing decline evident in the acting president's ramblings, the sooner the (non-white nationalist) youth take control the better. It's something Democrats have to look at very strongly.