A dirty bomb with wings by @BloggersRUs

A dirty bomb with wings 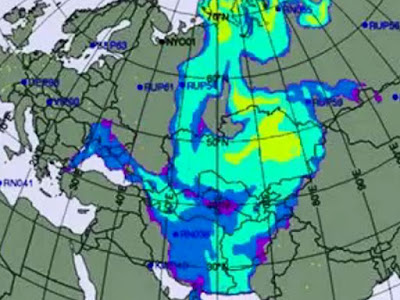 Strangelove: Yes, but the... whole point of the doomsday machine... is lost... if you keep it a secret! Why didn't you tell the world, eh?

DeSadeski: It was to be announced at the Party Congress on Monday. As you know, the Premier loves surprises.

We thought Fail-Safe and SAC and "duck and cover" drills were behind us, leaving Dr. Strangelove as a satirical send-up of a bygone era. Death from above on 30-minute notice, remember? The good-old days.

Ah, but Vladimir, you know, loves surprises. Like that explosion in Russia Thursday of a suspected experimental, nuclear-powered cruise missile dubbed by NATO SSC-X-9 Skyfall. At least seven people died. Radiation spikes appeared nearby that were 20 times normal. Reuters reports the two radiation monitoring stations closest to the test site went offline days after the blast, followed shortly by two others farther away. Russia cited "technical problems" at the sites in place as part of a Comprehensive Nuclear Test Ban Treaty network.

BREAKING: Locals in the Russian city of Severodvinsk have been told to take iodine tablets and stay indoor after massive explosion at nuclear test site days ago. Radiation levels have reportedly been detected. Residents only told an 'incident' took place. pic.twitter.com/Kdbcx5gM0I


"We got a mini-Fukushima right beside us and they pretended nothing scary happened," said a resident of nearby Severodvinsk, 25 miles east of the test site on the White Sea in northwest Russia:

"People need reliable information. And if the authorities think there is no danger, and nothing needs to be done, let them announce this formally so people don't worry."

Russian President Vladimir Putin during a visit to France Monday announced, "There is no threat here, no increase in the [radiation] background exists either."

Putin announced the development of a nuclear-powered cruise missile in March 2018. In theory, the missile would have virtually unlimited range and be able to circle the globe until ordered to deliver its warheads literally under an enemy's radar:

"This is a doomsday weapon really," said Dr Mark Galeotti, from Royal United Services Institute for Defence and Security Studies.

"It's not something that could be deployed in anything other than a full-scale nuclear war. It is a cruise missile that can stay in the air for a long time, but it is belching out radioactive plumes behind it."

So, a dirty bomb with wings. The U.S. gave up plans for one in 1964, the same year Strangelove reached theaters.

To requests on #IMS detection beyond #CTBT, data in, or near the path of potential plume from the explosion are being analyzed . We’re also addressing w/station operators technical problems experienced at two neighboring stations. All data are available to our Member States. https://t.co/pHL4WrHU23 pic.twitter.com/9aO5cQTlls

Less than three weeks after it left the Intermediate-Range Nuclear Forces (INF) treaty, the U.S. has tested a land-launched cruise missile with a range greater than 500 kilometers. Missiles with ranges between 500 and 5,000 kilometers were banned under the treaty until August 2.

What with radiation spreading, sea levels rising, glaciers vanishing, and scientists measuring the hottest July ever recorded, one imagines the lecher in the Oval Office might eagerly respond to the right kind of pitch:

Strangelove: Mr. President, I would not rule out the chance to preserve a nucleus of human specimens.