All paper ballots are not created equal by @BloggersRUs

All paper ballots are not created equal 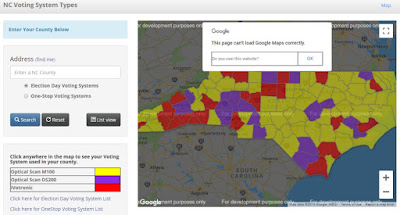 North Carolina's State Board of Elections voted Friday to approve three new voting systems for use in the state beginning in 2020. Over objections from over 20 voters and election experts who spoke demanding only systems using hand-marked paper ballots, the board voted 3-2 to include an ES&S touchscreen machine that prints a paper receipt showing a list of the candidates voters selected, but also a bar code rendering the machines actually count.

No matter what the printout reads, what happens in the electronics between the voter making selections on a touchscreen and the translation to a bar code is what has election transparency advocates concerned. The only person speaking in favor of the ballot-marking devices was Will Wesley, business development manager for ES&S.

"How would anyone know they're not voting for a cannister of Pringles?"

Chairman Damon Circosta, a Democrat, voted with the two Republican members against a motion from Board of Elections member Stella Anderson requiring only "human-readable" paper records. It was Circosta's first meeting since his appointment by Gov. Roy Cooper.

Republican board member Ken Raymond said voters objecting to the bar code system were being “inconsistent at best” since they accept bar code scanners at the grocery store and can easily verify the price they paid.

"I cannot look at a bar code and know that that bar code represents my vote," said board member Jeff Carmon, a Democrat.

"How would anyone know they're not voting for a cannister of Pringles?" responded one Twitter user.

Ultimately, the choice of which of the approved systems counties purchase to replace decertified touchscreen machines lies with local boards of elections.

Here are the talking points. Your turn, @SpeakerPelosi & other sponsors of the #SAFEAct. Use talking points to explain to the nation what specifically is in the bill so that corrupt state officials, including corrupt members of our own party, stop screwing over our elections . pic.twitter.com/5NdBMprX2l


Rev. Dr. T. Anthony Spearman, president of the North Carolina chapter of the NAACP, indicated his organization may file lawsuits against counties that choose electronic ballot-marking systems, reports Carolina Public Press. Such systems are already approved in other states:

“The Coalition for Good Governance would feel an obligation to immediately launch a legal challenge any decision to purchase barcoding ballot marking devices in NC,” Marks wrote in a statement to Carolina Public Press.

Nice start: through the 1st day of early voting in #NC09, Dem voters have outnumbered Reps by nearly 2-to-1. But historically, Dems vote early and Reps vote late, so don't make too much of it.

Keep it up, because hate is on the ballot and this race is too close to call. #ncpol https://t.co/KnCcBqpIJX

In North Carolina, "absentee" includes early voters, a.k.a. "One-Stop absentee" voting, where people can both register and vote at the same time.