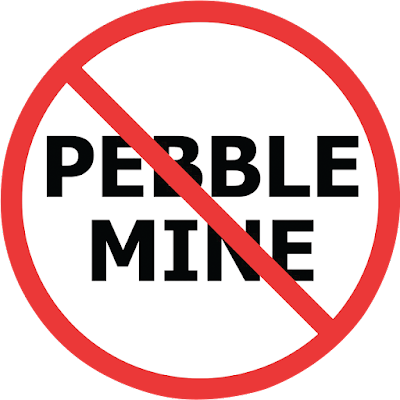 The proposal to ruin one of Alaska's most important fisheries with a massive copper and gold mining operation in Bristol Bay had dropped off my radar. Blogger Shannyn Moore (Just a Girl from Homer, Mudflats, Anchorage Daily News) put it there eight years ago. Native and environmental groups have fought the Pebble Mine for the last decade. The Environmental Protection Agency under the Obama administration eventually blocked the project expected to cause the "complete loss" of the Bristol Bay's fish habitat. 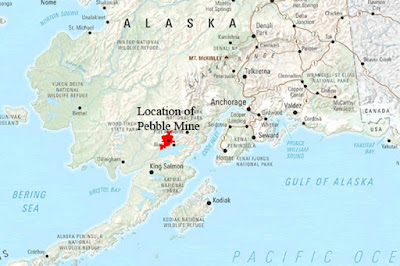 You know what comes next:

(CNN) — The Environmental Protection Agency told staff scientists that it was no longer opposing a controversial Alaska mining project that could devastate one of the world's most valuable wild salmon fisheries just one day after President Trump met with Alaska's governor, CNN has learned.

The EPA publicly announced the reversal July 30, but EPA staff sources tell CNN that they were informed of the decision a month earlier, during a hastily arranged video conference after Trump's meeting with Gov. Mike Dunleavy. The governor, a supporter of the project, emerged from that meeting saying the president assured him that he's "doing everything he can to work with us on our mining concerns."

The news came as a "total shock" to some top EPA scientists who were planning to oppose the project on environmental grounds, according to sources. Those sources asked to remain anonymous for fear of retribution.

Where would the Trump administration be without retribution? And the mining company behind the project, Northern Dynasty? It is not a U.S. firm. It's Canadian. America first, eh?

#Trump and #Dunleavy team up to destroy Alaska's greatest resource - our wild fish in favor of a toxic mine the EPA acknowledged would result in total destruction of the biggest wild sockeye #salmon fishery on the planet. #NoPebbleMinehttps://t.co/5jwwBMddcA


Trump met with Dunleavy during a on June 26 stopover on his way to the G20 summit in Japan. Dunleavy had put the project back on the front burner, Alaskan Kim Heacox wrote in April (The Guardian):

How to sell it (and his draconian budget cuts, and lavish tax breaks for Big Oil) to Alaskans? Dunleavy hosted town hall meetings orchestrated by Americans For Prosperity, the billionaire Koch brothers front group with its many-tentacled operation critics call “Kochtopus”. Their goal: suppress democracy with a drumbeat war against any scientific truth they don’t like.

Behind the curtain we find CEI, the Competitive Enterprise Institute, a rightwing organization that pressures the EPA to downplay, if not ignore, the Bristol Bay Watershed Assessment, which, according to the Alaska-based salmon conservation organization, Inletkeeper, “went through rigorous peer review, and multiple comment periods, to find that a mine like Pebble poses significant risks to the fish, water and people in Bristol Bay”.

Pebble CEO Tom Collier alleges outside environmental groups simply use opposition for fundraising because "no one gives a rat’s ass what happens in Alaska."

Heacox counters that 65% of Alaskans and 80% of Bristol Bay residents oppose the Pebble Mine. They've certainly put a lot of time and effort into opposing it. 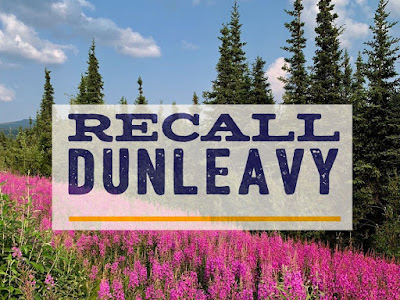 This and Dunleavy's budget cuts have spawned a recall effort:

Organizers of the effort to remove Gov. Mike Dunleavy from office announced Thursday that one week after launching, they had gathered more than 18,000 signatures and were more than two-thirds toward completing a first-round signature drive.

“It’s fair to say that Alaska has never seen anything quite like this,” said Scott Kendall, attorney for Recall Dunleavy and previously chief of staff to former Gov. Bill Walker.

The recall effort gained a prominent supporter Wednesday when the board of a major Alaska Native regional corporation, Cook Inlet Region Inc., announced it was endorsing the campaign.

Anchorage officials with the recall group said Thursday they had 18,198 signatures in hand. Close to 2,000 additional signatures had yet to be mailed in from cities and towns outside Anchorage, said Meda DeWitt, chair of Recall Dunleavy, in a statement.

I haven't seen Shannyn Moore in a few years, but likely she's still fighting to keep the economic wolves at (out of the) bay.