It's over when young people vote by @BloggersRUs

It's over when young people vote

“The election is over the minute young people decide to turn out," Sen. Chris Murphy (D-Conn.) tells the Washington Post. And so it is.

Murphy was responding to a gun-control program proposed by March for Our Lives, led by survivors of the February 2018 mass shooting at Marjory Stoneman Douglas High School in Parkland, Fla. Co-founder David Hogg, 19, and other students propose “A Peace Plan for a Safer America.”

The Peace Plan would create a national licensing and gun registry, long a nonstarter with gun rights advocates; ban assault weapons and high-capacity magazines; implement a mandatory gun buyback program; and install a “national director of gun violence prevention” who would report directly to the president and coordinate the federal response to what advocates call a national public health emergency.

The group also proposes raising the age for gun purchases from 18 to 21, a 10-day waiting period for gun purchases, and a federally supervised "multi-step" gun licensing process, renewed annually.

The National Rifle Association (should that be prefaced with "Russian-funded"?) naturally will oppose such measures with whatever strength the struggling organization can bring to bear. Spokeswoman Amy Hunter tepidly called the March for Our Lives plan "out of the mainstream."

Hogg called the NRA “the big tobacco of violence in the U.S.,” adding, “The NRA cares as much about gun owners’ safety as the tobacco industry cared about smokers not getting cancer.”

Although a poll taken before the El Paso and Dayton mass-shootings found 70 percent of Republicans favor family-initiated "red flag" laws, the March for Our Lives proposal will find few (if any) friends among Republicans in Congress. Moderate Democrats concerned about their next elections will not be leaping on to the bandwagon either.

But backstopping the students' effort to gain control of the narrative on gun violence is a call for automatic voter registration when eligible teens turn 18. Activating the youth vote is key to moving the needle in Congress.

"The election is over the minute young people decide to turn out," Murphy said. "The only reason that Trump would get reelected is if young people stay home. The issue of gun violence is one of the only issues that truly motivate young people to shake off their indifference and aversion to voting."

An excited voter registration volunteer called yesterday to request laminated copies of this chart I created from last fall's NC turnout data. Showing nonvoters where the people power really lies in this country versus who actually exercises theirs (seniors) was enough to convince them to no longer leave their fates in the hands of parents and grandparents.

This shape of this NC data is similar around the country. Share it with your friends. 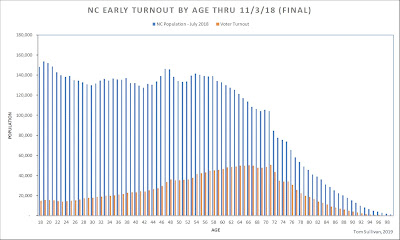 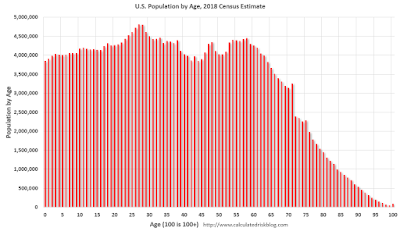 There are various measurement issues with turnout. I’m using Census’s estimates w/o adjustment for each year, so comparable.