Red-faced and rugged by @BloggersRUs 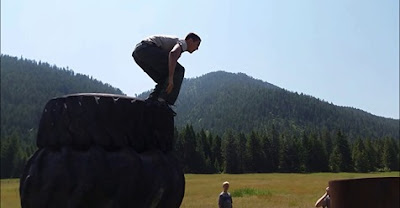 Republican whines over Democrat Joaquin Castro posting the publicly available names of Donald Trump donors weren't very manly, now were they? Isn't the GOP thing to do to bluster, "Yeah? What of it?!!" But no. They cried that the mean, old liberal had been, you know, mean. Why, publicizing those names might invite violence.

But isn't the National Rifle Association lifetime member thing to do to boast that your residence is protected by Smith & Wesson? Suddenly, that wasn't good enough for NRA President Carolyn Meadows. She began paying off-duty deputies to stand guard outside her Marietta, Ga. home after receiving “anti-gun postcards.” NRA CEO Wayne LaPierre asked the board to buy him a $6 million French chateau-style mansion in Texas out for concerns for his personal security after the Parkland shootings.

Wayne, buddy, you can pick up another base-model AR-style rifle at the gun show for under $500, or one fully tricked out with a laser sight and hardshell case for under $1,500 (bipod extra). Six million dollars will buy a hell-yeah-acious amount of manliness. Only liberal wimps hide in chateau-style mansions.

Mean Mr. Julián Castro doubled down on manly by buying time on Fox News. He ran a TV ad blaming Trump for the El Paso slaughter on the network where Trump would be sure to see it. Not only did Joaquin smack around Trump's donors, Julián smacked Trump around on his pet propaganda network.

The Guardian has obtained emails showing Washington state representative Matt Shea has connected allies with "a group offering training to young men in 'biblical warfare' that includes how to use knives, pistols and rifles, with lessons based in part on the teachings of a Georgia-based neo-Confederate pastor."

Caughran asks Shea to publicize a link to the group’s Facebook page, and put him in touch with “John Jacob Schmidt”, the nom de guerre of Shea associate, Jack Robertson. Robertson is a rightwing podcast host who advocates for conservatives to move to the “American Redoubt” in eastern Washington, Idaho and Montana, and, with Shea, campaigns for eastern Washington to secede and form its own state.

On Team Rugged website, it is described as “a Christian organization that strongly believes in building manly character and the capability to stand in adversity in young men”.

Team Rugged's manly biblical warriors seem to have taken down their Facebook page this morning. And their YouTube training video. But Shea's two-year-old video from "patriot land" is still online.

Caughran writes, “There will be scenarios where every participant will have to fight against one of the most barbaric enemies that are invading our country, Muslims terrorists (sic)”. The training will enable young men to be "better prepared to fight against physical enemies, and to do so, God’s way and with His blessing.” Shea believes (video) God's way includes shooting while practicing Matrix-esque one-handed cartwheels.

Update: Earlier version got my Castros mixed up. [h/t S.S.]