Takin' it to the streets by @BloggersRUs

Takin' it to the streets 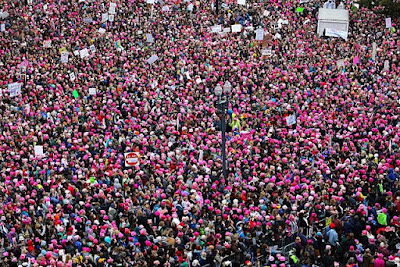 When will Americans take to the streets? When will be abandon clicktivism and a soul-sapping diet of outrage? It seems the only practical/impractical way left to alter the trajectory of the growing dysfunction. Somewhere even now there may be a seed crystal with potential for growing into a movement capable of doing what politicians, deportations and mass-shootings cannot: forcing Donald Trump from office, closing the camps, disarming the NRA, neutering white nationalism, reforming policing. Whatever, I'm still looking, exhausted, for a spark to catch fire.

The Women's March of January 2017 was just such an idea. The marches were worldwide and massive. Just not sustained. The Daily Beast's Christopher Dickey examines a study in the journal Nature that finds what makes protest effective is not just size but momentum.

Erica Chenoweth and Margherita Belgioioso consider that like the formula for momentum, mass times velocity (p=mv), when “movements maintain mass and velocity, they maintain momentum.” Sudan's opposition, for example, employed "a combination of protests, marches, general strikes, and other forms of non-cooperation" to remove Omar al-Bashir in April after 30 years. Algeria’s “Smile Revolution” peaked with an event that mobilized under 2.5 percent of the population to topple the government there in March. The Sudan protests were also less than 2.5 percent.

As much as a quarter of tiny Hong Kong's population took to the streets in one of multiple days of protest there.

Again, there’s a formula. Not only are Hongkongers showing an instinctive understanding of “the physics of dissent,” they’ve added a bit of Kung Fu philosophy from the late martial arts icon Bruce Lee. When facing authority, “be water,” flowing where the power is weak or absent. The most active protesters tell each other, rather poetically, “Be strong as ice, be fluid like water, gather like dew, scatter like mist.”

Why have we not seen a similar movement congeal in the U.S. since the 1960s? One reason is geography — the sheer size of the country conspires against sustained and concentrated protests in Washington, D.C., for example. Protests led by the American left tend to become issue fairs. Every interest group and their ideological brothers want a piece of the action, join in, and dilute if not hijack the central message. If there ever was one. The possibility of being drafted, or a family member being drafted, to serve in a widely unpopular war kept Vietnam protests somewhat more focused.

Maybe the American opposition to the Trump regime really isn’t as impassioned as many rants on Twitter might suggest. Or maybe those are just onanistic ends in themselves. There’s been a lot of obvious passivity: waiting for Robert Mueller to take care of everything, or pretending that the symbolic act of impeachment will squeeze the sleaze out of office.

Certainly, by comparison with the demonstrators in other parts of the world there’s a hint of sloth and even of cowardice.

What's missing, Dickey suggests, is the protests "have to keep coming again and again–preferably weekly, even daily." Again, in a country this dispersed the logistics behind that are challenging.

Movements which demand not just the departure of the country's leader but also "the expansion of rights, democracy, justice, or economic opportunity" fare better than those that simply topple the government, Chenoweth and Belgioioso explain. Where the military steps in to support the protesters, the military has a tendency not to step back out:

That said, historically speaking, movements that have used nonviolent resistance to oust long-standing autocrats from below have had a better track record than those using armed struggle in generating more democratic outcomes in the longer term. Countries in which movements have stayed engaged throughout the transitional process have fared better than those where the movements quickly demobilized after declaring victory. But the struggle for democracy, rights, and justice is rarely over when the leader departs.

That arc is long, longer than a single march or even a string of them.