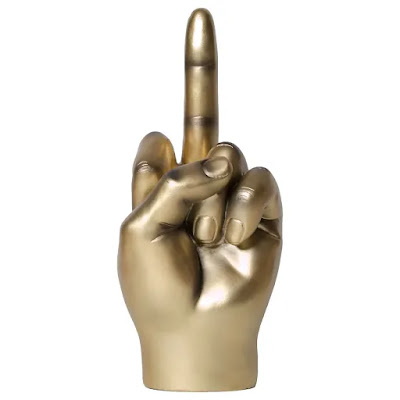 One of the first images assaulting weary eyes this morning is a Bill Bramhall cartoon from the New York Daily News featuring the Statue of Liberty. Her right hand holding the torch that greets immigrant to these shores has been removed. A crane reading Cuccinelli is replacing it with a hand with an upraised middle finger.

The White House issued a new rule Monday that will deny green cards and potential citizenship to legal immigrants, NPR reports, "if they use — or are deemed likely to need — federal, state and local government benefits including food stamps, housing vouchers and Medicaid."

For those who missed it, Ken Cuccinelli, acting director of U.S. Citizenship and Immigration Services, edited the famous Emma Lazarus poem during a Tuesday interview to read, "Give me your tired and your poor who can stand on their own two feet and who will not become a public charge." He later denied he had referenced the poem at all, as bald-faced liars will do. Cuccinelli suggested the Lazarus poem on the statue's base referred to "people coming from Europe where they had class-based societies, where people were considered wretched if they weren't in the right class."

Translation: In one nation under Trump, immigrants not from Europe can take a flying leap.

"People coming from Europe" is another in a long line of euphemisms Trump and his allies use in place of "white," writes Amanda Marcotte. Among them are "Western civilization," "Western values," "culture and demographics," and "our cultural cohesion." Cuccinelli's is simply less lyrical and over-direct.

Liesl Schillinger offers a reflection in the Washington Post on the meaning of the statue, the poem, and the song Irving Berlin made from it:

He and his family were poor refugees from a shtetl in imperial Russia; their house had been burned down, and they had fled to America. The father had been a cantor at the village synagogue in Russia, but in New York the only job he could find was at a kosher meat shop. That’s what he did to support his family until he died, by which time the boy who would one day set the Lazarus poem to music was 13. That boy did not grow up to become a burden on American society: He went on to write “White Christmas,” “Alexander’s Ragtime Band” and … “God Bless America.” His name was Irving Berlin. Like poor immigrants before and after him, he contributed to America’s idea of itself and to America’s ideal of itself. Immigrants made America. Immigrants make America.

Many have observed that Cuccinelli's family, as many of ours, would not be admitted to this country under the proposed immigration regime. Schillinger writes, "Most likely, the large, impecunious Berlin family would have been barred from citizenship as a potential 'public charge.' You can’t gain traction to stand if the land where you live will not give you a foothold."

Denying that to the latest disfavored immigrant group is the point, as is cruelty itself.

At this rate, even asylum seekers held on the border who successfully gain admittance can expect this treatment even if they accept no federal, state or local government benefits whatsoever. The Trump administration will find the overcrowded, unsanitary room and board provided by US Customs and Border Protection during their captivity a disqualification for citizenship.