#AskPreet How will the WH mob avoid prosecution for witness tampering? @spockosbrain

#AskPreet How will the WH mob avoid prosecution for witness tampering?

On former US Attorney Preet Bharara's podcast, Stay Tuned with Preet, he and Anne Milgram, former New Jersey Attorney General, discussed quid pro cases and referred to politicians they successfully prosecuted. It was very interesting. Now I want to hear about cases where they busted politicians and how they did it.

Of course the "experts" on Fox & Friends say there was no quid pro quo with Trump and Ukraine. Maybe it was something else...


Every seafood restaurant in DC should have a special this week called Squid Pro Quo.


But seriously, Preet, for your next podcast I want to hear about witness tampering cases.  What evidence is needed to successfully prosecute them?


When you lost a case with a witness tampering charge, why did you lose? Were their lawyers too clever for you? Did the perpetrators use vague code phrases that could be re-defined as innocent comments?  Did they avoid writing things down, so you had no hard evidence?  Did they hide or destroy any electronic records of them talking about the case?

How did people avoid getting caught for witness tampering?


I ask because right now I see the White House is ramping up the attacks on witnesses.

....In addition, I want to meet not only my accuser, who presented SECOND & THIRD HAND INFORMATION, but also the person who illegally gave this information, which was largely incorrect, to the “Whistleblower.” Was this person SPYING on the U.S. President? Big Consequences!
— Donald J. Trump (@realDonaldTrump) September 29, 2019

The lawyers for the whistleblower are concerned about his safety.


The purpose of this letter is to formally notify you of serious concerns we have regarding our client’s personal safety. We appreciate your office’s support thus far to activate appropriate resources to ensure their safety.

The events of the past week have heightened our concerns that our client’s identity will be disclosed publicly and that, as a result, our client will be put in harm’s way. On September 26, 2019, the President of the United States said the following:

The fact that the President’s statement was directed to “the person that gave the Whistleblower the information” does nothing to assuage our concerns for our client’s safety. Moreover, certain individuals have issued a $50,000 “bounty” for “any information” relating to our client’s identity.  Unfortunately, we expect this situation to worsen, and to become even more dangerous for our client and any other whistleblowers, as Congress seeks to investigate this matter.

Trump will use the same methods to intimidate witnesses as before. How have these tactics been successfully busted before by prosecutors?

Barbara McQuade has talked about how hard it is to prosecute witness tampering because the state needs to prove intent.


Are there ways that prosecution lawyers were able prove intent? How did defense lawyers avoid criminal prosecution?  If we know the tricks they will use, can we prepare to catch them in the act?

For example, did defendants use "cut outs" or third parties to do the dirty work for them, so the act of intimidation couldn't be traced back to the defendant?


(I'm reminded of Stormy Daniels' story:  "A guy walked up on me and said to me: 'Leave Trump alone. Forget the story,'" Clifford said. "Then he leaned around and looked at my daughter and said, 'That's a beautiful little girl — it'd be a shame if something happened to her mom.' And then he was gone." --Stormy Daniels, 60 Minutes on March 25, 2018
.
BTW, she was threatened by man who looked a lot like the son of Matthew Calamari, chief operating officer at the Trump Organization, first joined the company as a bodyguard in 1981. (My squid pro quo joke.. )

Good news on the Stormy front! She just won $450,000 from the city of Columbus Ohio. (Police arrested Daniels on July 11, 2018, at the Sirens Gentlemen's Club on misdemeanor charges of inappropriately touching customers.)

We know how Trump fights. He learned from Roy Cohen. Author Selwyn Raab, who wrote about the Mafia and John Gotti, said in an interview in Slate, by Rebecca Onion. 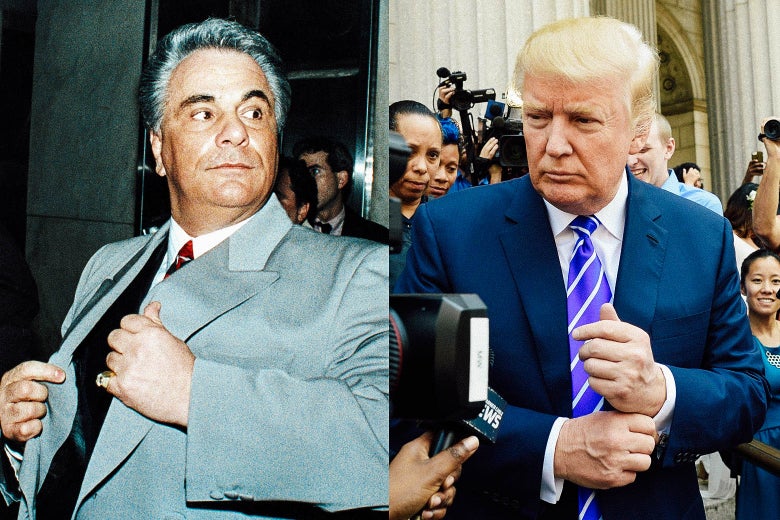 "It’s important to remember that Trump learned his ABCs for success from Roy Cohn, who was mixed up in the Mafia, defended them, and mentored Trump exactly how to succeed in life. “Always be aggressive, take no prisoners …

”Roy Cohn defended major mob bosses two ways: He tried to bribe the judges, and he would undercut any witness against them. They demolished the witnesses. And Gotti’s lawyers did that until his final trial. You didn’t accept the word of any opponent, you demolish them."

I think the public could learn from Selwyn Raab, a former investigative reporter for the New York Times who covered organized crime,wrote Five Families: The Rise, Decline, and Resurgence of America’s Most Powerful Mafia Empires.

But what I want from you Preet and Anne are stories from our CURRENT justice system. What have our US Attorneys learned about how witness tampering works in our current system? What have the mob lawyers learned? What does it mean when the judge that might try a case, owes his appointment to the person on trial? How do the rules change when a mob boss can use millions of followers on Twitter to undercut or threaten a witness? What is the punishment for an entire media operation that will demolish a witnesses?

Bottom line.  The WH will use mob tactics against the whistleblower and anyone who helped him. It's what they do. A lot of people I've talked to (okay, at least 5 ) think Democrats won't be able to pin a witness tampering charge on Trump. So I'm asking you to give us recent examples of cases where law enforcement WAS ready for threats, caught the people making them & successfully prosecuted them.

I want to give people both hope and a model to follow.