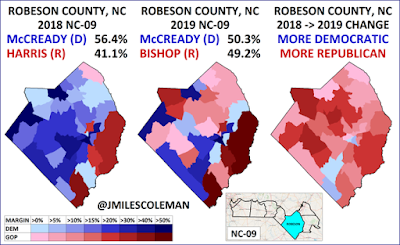 Democrats' hopes of retaking NC-9 — and Dan McCready's — faltered Tuesday night, as the moderate Democrat fell two points short of victory (roughly 4,000 votes) against Republican state Sen. Dan Bishop of "bathroom bill" fame. An R+8 district Donald Trump won by 12 points in 2016, NC-9 remains in GOP hands as it has since the 1960s. Turnout was just over 25 percent, with the early vote (Absentee/One-Stop) favoring McCready.

Perhaps the biggest surprise in McCready's loss was the closeness of the race in Robeson County, touched by the GOP election fraud operation that prompted the decision to re-run the election after state Board of Elections hearings in February. Home to a large Lumbee tribe population, voter registration in Robeson favors Democrats (60% D, 13% R, 27% Unaffiliated/other). Obama won the county in 2012. The county flipped to Trump in 2016, but McCready took it last fall by 15 points.

One place I'll be watching in #NC09 tomorrow night is Robeson County. This racially diverse county was Obama -> Trump but flipped back to @McCreadyForNC in 2018. McCready did much better than Clinton with the Lumbee Indians, in the western part of Robeson County. #ncpol pic.twitter.com/okcSNqMxSz

A key ingredient to Dan Bishop's (R) #NC09 win was Robeson County, in the eastern part of the district. This was an Obama -> Trump county that McCready won by 15% in 2018. It nearly flipped tonight, with the Lumbee Indian precincts (in the west) moving most heavily GOP. #ncpol pic.twitter.com/17Ci590wgk


Cook Political report's Dave Wasserman tweeted, "If Democrats want to understand how they lost to Trump despite gaining tons of ground in places like Charlotte & the Triangle, they need to visit Robeson County, NC right away."

Visits to the district by President Trump and Vice President Mike Pence appear to have helped Election Day turnout for Bishop. Trump told a Monday rally in Fayetteville, “Tomorrow is your chance to send a clear message to the America-hating left.”

“A lot of Lumbees voted for Trump because of the jobs situation,” says Freda Porter, 60, a tribe official. “I don’t know what we make anymore. It has been difficult for us. I grew up on the tobacco fields with my family, now we aren’t together anymore. People die from opioids every week. We need a period of healing.”

She said the tribe’s deep evangelical Christian roots added to Trump’s appeal. “A lot of people saw Obama and thought, ‘That’s too liberal for me.’ We are a very traditional Christian community, some people thought the Republicans better reflected that.’”

Wasserman adds that McCready's improved performance in the Charlotte suburbs (Bishop's district) should have signaled a win but for his dismal showing "among rural Trump Dems (yes, they're a real constituency)." While base turnout is important for Democrats, this is why targeting anyone with a "D" beside their name for turnout (as Clinton did in 2016) is hazardous in rural America if not in all of it. Knowing who is and is not your base is a prerequisite.

A strategy that focused on wooing soft Rs and right-leaning Indies instead of driving up turnout of D voters and left leaning Indies came close, but ultimately failed in NC-9.

What might have happened if @staceyabrams had stumped for @McCreadyForNC?

Party registration is complicated and a poor indicator of leanings in rural America. Here on the western edge of North Carolina, a Facebook friend reported a conversation with an "ardent Democrat" visiting the Democrats' booth Tuesday at the Mountain State Fair. The voter, she wrote, is "anti-union (FDR should have made corps pay decent wages); thinks Roe v. Wade was made up (no pictures exist, ergo, it must not be real); loves Obama; wouldn't commit to gun control or universal checks but NRA is too big; will vote Democratic no matter what."