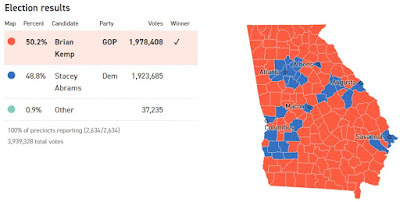 Stacey Abrams cited her record-breaking 2018 campaign for Georgia governor Monday as evidence the state should be Democrats' ground zero for organizing efforts in 2020. With two U.S. Senate seats on the line and a chance to put Georgia in play in the presidential contest, Abrams writes in a memo issued on Monday, "any less than full investment in Georgia would amount to strategic malpractice."

The 16-page "Abrams Playbook" co-written with former campaign manager Lauren Groh-Wargo rejects the notion that Abrams — who has stated she will not seek a Senate seat in 2020 — is not the only Democrat who might win statewide in Georgia. Building on her strategy for massively expanding the electorate rather than targeting the small pool of “swing voters” or “persuadable voters,” any "aggressive, authentic candidate and campaign" might win in Georgia. And not only in Georgia, Abrams argues, but in any state "poised to take advantage of demographic changes." Those changes include not only people of color but in-migrating whites.

“We do not lose winnable white voters because we engage communities of color” nor "lose urban votes because we campaign in rural areas,” states the memo sent to Democrats' 2020 White House hopefuls and Democratic strategists," the Atlanta Journal-Constitution reports:

The playbook includes charts that outline where Democrats can make gains in 2020, particularly in metro Atlanta counties where hundreds of thousands of African-American voters skipped the midterm. In Fulton alone, it said, an estimated 134,000 registered black voters didn’t cast ballots in 2018.

Groh-Wargo wrote that the cost of competing in Georgia, where the Abrams campaign and the state party combined to spend $42 million in 2018, is cheaper than other battleground states. She singled out Ohio, where Hillary Clinton lost by 8 points despite a $70 million investment.

"By investing big and investing early in registration, organizing, and turnout, Democrats can further change Georgia’s electorate and maximize turnout among voters of color and Democratic-leaning white voters," Groh-Wargo writes.

Democrats from the grassroots to the White House tend to view elections through the lens of statewide races – for president, for governor, for Senate. Those campaigns set the agenda and budgets for Get Out The Vote efforts statewide. Those candidates want to get out the vote in bulk. They pour their resources into counties where they can do that. In Georgia, that's Atlanta and environs: Fulton, Gwinnett, Cobb and Dekalb. Indeed, those counties top the playbook's list of targets. Beyond there, Georgia gets rural fast. One-third of Georgians live in 134 counties under 100,000 in population.


Although the memo touts the Abrams campaign's investments across the state in 2018, those tend to bleed away fast. Large campaigns parachute out as fast as they parachute in, and so does the money. The Georgia Democratic Party's web page shows 97 of 159 county committees across the state (60%) presently unorganized. (Checks for signs of Internet life among the missing support this.) When Abrams ran last year that unorganized number was under a quarter. Knowledgeable Georgia Democrats assured me this condition was simply a delay in data entry and to give it a month. That was in May.

And while the memo celebrates down-ballot wins assigned to Abrams' organizing, these too tend to be clustered in Atlanta Metro. Running up the score in Georgia's bluest areas (or Raleigh, Greensboro or Winston-Salem in North Carolina) may help the top of the ticket, but it doesn’t win extra seats in the state legislature. To win and hold a majority, Democrats don’t just need blue votes in bulk, they need them out where state House and Senate seats are drawn. (It is the same principle with the national popular vote and control of the U.S. Senate.)

Invest in enduring local committee infrastructure where there is none now and Democrats in Georgia and elsewhere might even pick up enough legislative seats to undo the 2021 Republican gerrymandering already in the planning stages. But while big organizing is still driven by the campaign cycle instead of for the long-term, Democrats at the grassroots will have to wait for demography to do the work for them over time.

On party (rather than campaign) infrastructure, Howard Dean is still right: If you don’t show up in 60 percent of the country, you don’t win.

Update: One advantage of Abrams’ efforts I forgot to mention is that Democratic campaigns vying for the 2020 presidential nomination are already pouring resources into Georgia and building on them less than a year after her campaign ended.