Taking it to Trump

Taking it to Trump 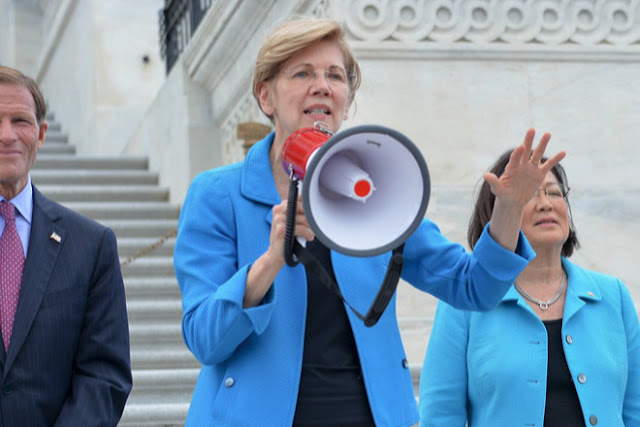 It didn't get much press at the time but Trump's sister, a federal judge, retired shortly after that NY Times story about the family's tax fraud was published, effectively ending an official investigation into the family finances.

Elizabeth Warren cleverly uses this case as an example of one reform she is proposing. It's a bold move both politically and substantively:

In a Medium post published Monday, the Massachusetts Democrat proposes closing the loophole that “allows federal judges to escape investigations for misconduct by stepping down from their post.”

In outlining the idea, Warren specifically references a case involving Trump’s sister Maryanne Trump-Barry, whose retirement brought an abrupt end to an investigation into her role in various tax schemes of the family and potential fraud therein.

“Under my plan, investigations will remain open until their findings are made public and any penalties for misconduct are issued,” Warren writes in the post.

In spotlighting the Trump-Barry case, Warren becomes the first Democratic presidential candidate to take an overt shot at the president’s sister. But Trump-Barry isn’t the only judge that Warren cites as a basis for her ethics policy. The senator also cites allegations of sexual misconduct against the former appeals court judge Alex Kozinski and how a probe into the allegations was scuttled when he resigned.

Nor is the proposal dealing with federal judges the lone plank in the new policy. The proposal is one of many in a larger package that includes banning “lobbyists from making political contributions” and “from bundling donations or hosting fundraisers for political candidates." It would also ban senior officials and members of Congress from serving on for-profit boards and prohibit courts from using sealed settlements to conceal evidence in cases involving public health and safety. Collectively, the program is ambitious in its scope. But it would face hurdles to its passage. Warren is attaching it to her current ethics bill which requires congressional approval in order for enactment.


It's more than just a shot aross Trump's bow:

The timing of Warren’s proposals is politically intriguing, however, as it comes as reports of new sexual misconduct allegations surfaced against Supreme Court Justice Brett Kavanaugh. Warren, as well as many of her 2020 Democratic opponents, said on Sunday that they believed the new revelations warranted impeachment of Kavanaugh, something that several progressive groups have been pushing as well.

In laying out her new ethics pledge, Warren says that the proposed closing of loopholes could apply to situations like Kavanaugh’s, as she noted that a judicial conduct panel dismissed a number of ethics complaints against Kavanaugh in August, citing their lack of authority over Supreme Court justices.

“Our federal court system only works if the American people have faith that it is neutrally dispensing fair-minded justice without bias or personal interests interfering in judicial decisions,” Warren writes. “If we want the American people to believe this, we need some serious judicial ethics reforms.”

The release of it precedes a speech Warren will deliver in New York City on Monday night near the site of the 1911 Triangle Shirtwaist Factory fire, continuing a pattern for the 2020 contender of introducing policy tied to the historical struggles of workers.


O'Rourke on guns, Sanders on Medicare for All, Warren on this among other plans from the all the candidates --- I like this aggressive spirit. We are long past the point at which it makes sense to split the difference and be "moderate."

Years ago I used to write about my own theory of politics and I think we're starting to see it play out:

I have long had a rather simplistic belief that American political power was properly seen as a tug-of-war rather than a pendulum. For decades, the left was sort of holding on to the rope with one hand, checking out the scenery, enjoying the fruits of the New Deal and tolerant social change and forgetting that they had to put all their weight into the game or the other side would pull them completely over the center line. The 1994 Republican Revolution jerked me awake and I watched in horror for the next decade. Over that period many more liberals woke up to the fact that we were no longer standing firmly on our side of the line anymore. I realized that the "third way" stance the Democrats had taken during the late 80's had been a brief tactical success, but a long term strategic mistake. In the tug of war, you simply can't rely on the other side, particularly when its infused with revolutionary fervor, to stop pulling once you reach the "middle."

Marginalizing Fox is an important step in the process but it's going to take a sustained effort. I've been watching the right for too long to believe they are doing anything but taking a breather right now. It is a very, very big mistake to ever let up on the rope. The Bush administration has been a massive laboratory experiment in what goes wrong when the Democrats make a huge strategic error and the media completely fails in its duty. We really can't let this happen again.


12 years later maybe the party has finally caught on?