The Taliban should have sent a beautiful letter

The Taliban should have sent a beautiful letter 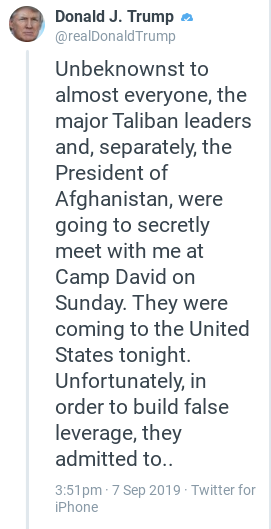 I don't know what went on there, but it's very, very strange. In fact, I think we can easily just assume that it's bullshit.

And let's just say that this doesn't exactly clear it up:

Pompeo on Meet The Press: "You should know, in the last 10 days we've killed over 1,000 Taliban. And while this is not a war of attrition, I want the American people to know that President Trump is taking it to the Taliban." pic.twitter.com/dXxQwzrYkD

This is some pretty ghoulish stuff coming from the Secretary of State pic.twitter.com/bDlshrS2yW

Listen to this clip while reminding yourself that Pompeo is talking about the same people Trump invited to Camp David. #incoherent https://t.co/H2zOTFrb5x

The fact that the president tweeting out a temper tantrum about a supposed secret meeting with the Taliban at Camp David that was scheduled for the next day being canceled isn't even considered weird is astonishing enough. That he thought this would be a good idea in the first place is simply gobsmacking. Presumably, he wanted to have the Taliban leaders around for the 9/11 commemorations so he could do some sort of Kim Jong Un photo-op and declare the Taliban a lovely group of guys who are looking to build some condos in Kabul.

Unfortunately for him, they don't seem to understand the way to Trump's heart is to kiss his ass first and save the violence for later when he will defend them in order to save face.

I am not one to believe we must "win" in these foreign wars. I'm not sure what that even means. But I do think we must try to work with a legitimate government and prevent our departure from turning into a killing field for people who were our friends and allies.

The Taliban is killing human rights activists even as they negotiate one-on-one with the US:

Maybe if Trump were willing to accept any who wants to come as refugees that might be one way of mitigating the danger. But I think it's pretty clear that's not going to happen.

Obviously, we can't occupy the country forever. But there's no doubt that it's risky to allow the place to become a breeding ground for ISIS and al Qaeda (again) because that inevitably leads to even more war and probably invasions if they manage to pull off a major terrorist attack. It's a difficult problem to solve, to say the least.

Certainly, no negotiation can possibly be useful if Trump is on one side of it because he's the worst negotiator in history. And unlike the debacle with North Korea you can't even say, "well any day without a nuclear war is good" to justify the bromance that is allowing Kim to build missile systems that are threatening his neighbors and are likely to lead to a nuclear arms race in Asia. Abruptly leaving Afghanistan to the Taliban will almost certainly lead to a bloodbath.

Peace talks are good as long as they include international partners, and the Afghan government. Trump involved is bad. And from the looks of it Pompeo isn't much better although he might be talking like a bloodthirsty freak in order to appease Dear Leader. But I don't think anything that happened this weekend is what they are saying happened. Trump wanted to "take credit" for walking away after it was obvious that they had already failed.

It's cute that Republicans are all saying today that the Taliban shouldn't ever be allowed to spend time at some place like that and that Trump is strong and powerful for canceling the meeting --- conveniently overlooking the fact that he's the one who invited them. But it isn't the way things should be done. These sorts of talks should be on neutral ground and the president shouldn't go anywhere near them until a deal is fully vetted and signed off on by all the parties. I think what happened was that Trump just wanted his "Nobel Peace Prize" photo op so he jumped the gun and then somebody brought it to his attention that blowing up American soldiers wouldn't be a big seller as a way to get him to retreat.

This has all the markings of another one of his impulsive moves. He doesn't know what he's doing so he's making everything worse. It's hard to see how anyone could do that with Afghanistan but Trump is a unique talent.

This seems like a smart analysis of the situation although I don't honestly know if there's any good answer here.