”We are the Corp. Resistance is futile.” by @BloggersRUs

”We are the Corp. Resistance is futile.” 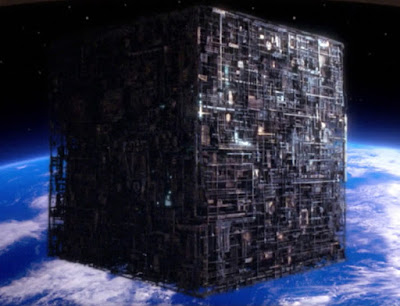 We should all dream of being entrepreneurs. Our own bosses. Randian visionaries unbound by convention. Free people, free markets. George W. Bush dreamed the "ownership society" would produce more than just more. It would produce more Americans who think conservative and vote Republican. Then 2008 happened.

That did not stop true believers, however. Gig-economy firms have made millions treating workers as independent contractors. No benefits. Lousy pay. But, hey, be your own boss! Set your own hours! Be a risk-taker!

Not so fast, say California lawmakers. The state Assembly on Wednesday passed AB5, a bill setting rules for when an independent contractor is actually an employee entitled to be treated and paid as one. The bill now goes to Gov. Gavin Newsome for his signature. Newsome told the Wall Street Journal he plans to sign the bill into law.

“Let’s be clear, there’s nothing innovative about underpaying someone for their labor and basing an entire business model on misclassifying workers,” Elena Durazo said.

The law’s impact could be even more far-reaching. Amid concerns over income inequality, the issue of employment status has become part of the national conversation — and California often sets the pace for the rest of United States. Democratic presidential candidates including Bernie Sanders, Kamala Harris, Elizabeth Warren, Julian Castro and Pete Buttigieg support the bill. Buttigieg joined drivers last month at a pro-AB5 rally outside Uber’s Mid-Market headquarters. Sanders last year introduced similar legislation called the Workplace Democracy Act, with Warren and Harris among his co-sponsors, although it will not pass as long as the Senate remains under Republican control.

AB5 codifies and expands a groundbreaking California Supreme Court decision from last year known as Dynamex, which uses a simple three-part criteria, the ABC test, to determine employment status. It says a worker is an employee if the worker’s tasks are performed under a company’s control; those tasks are central to that company’s business; and the worker does not have an independent enterprise in that trade.

Uber refuses to comply. The firm says it will not reclassify its workers when the bill becomes law. Giving people rides is not central to its business. Uber merely serves “as a technology platform for several different types of digital marketplaces.”

This is a good point by @Uber. Just last week as my wife and I were leaving a bar, I turned to her and asked “are you getting a technology platform for several different types of digital marketplaces or should I?” pic.twitter.com/8IlBL5q1Tm


The New York Times Editorial Board has little sympathy:

The real issue, of course, is that the new law would force Uber, Lyft and other companies with similar business models to share more of their revenues with their workers.

That could well result in higher prices for customers, too. But that would be nothing more than a necessary corrective. The companies and their customers have benefited at the expense of workers who lack the legal power to protect themselves: They have neither the minimum protections afforded to most workers nor the right to bargain collectively. The underpayment of unprotected workers is not a defensible business model.

Nobody knows more about defensible business models then our acting president. Maybe gig-economy companies can get an assist from him. He already finds California's emissions deal with automakers an affront to his authority.

On their own, ride-hailing services Lyft and Uber plan to buy themselves an exemption and have set aside $90 million to fund a 2020 referendum to overturn the not-yet law.

They will add your individual and biological distinctiveness to their bottom lines. Your culture will adapt to service them. Resistance is futile.