"A moment of American betrayal" by @BloggersRUs

"A moment of American betrayal" 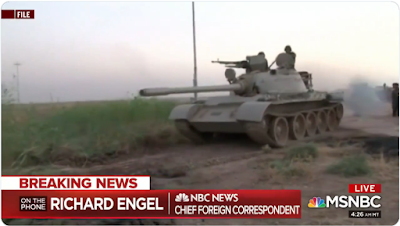 President Trump had another of his infamous calls with foreign heads of state on Sunday. In speaking with Turkish President Recep Tayyip Erdogan, Trump agreed to withdraw U.S. troops from the Syrian border clearing the way for a Turkish offensive into northern Syria. 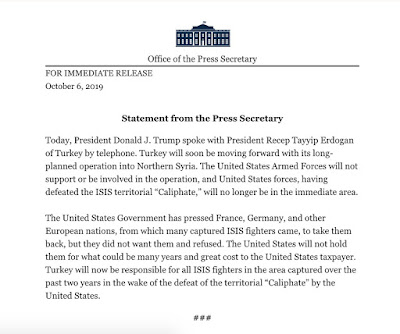 “The United States Armed Forces will not support or be involved in the operation, and United States forces, having defeated the ISIS territorial ‘Caliphate,‘ will no longer be in the immediate area,” the White House said.

Trump remarked last summer that Erdogan "has a big problem with the Kurds ... and he was going to wipe out the Kurds, who helped us with ISIS." Trump claimed he told Erdogan, "You can’t do it. And he didn’t do it."

The Washington Post last week quoted Pentagon spokesman Cmdr. Sean Robertson as saying "any 'uncoordinated military operations by Turkey would be of grave concern as it would undermine our shared interest of a secure northeast Syria and the enduring defeat of' the Islamic State group."

That was Friday. Then Trump had a phone call.

The fast moving developments threatened a fresh military conflagration in a large swath of northern Syria, stretching from east of the Euphrates River to the border with Iraq. Syrian Kurds had established an autonomous zone in the area during more than eight years of Syria’s civil war.

Ankara, however, has been increasingly unnerved by the Kurdish presence, and the close ties between U.S.-allied Syrian Kurdish fighters and the Kurdistan Workers’ Party, or PKK, a militant group that has fought a long insurgency against the Turkish state.

For months, Erdogan has been threatening an imminent invasion, as Trump administration officials attempted to work out an accommodation that would satisfy Turkish demands for border security while providing a measure of protection for the U.S.-allied Syrian-Kurdish force.

But on Sunday, the United States appeared to throw up its hands. White House press secretary Stephanie Grisham said the Turkish leader would “soon be moving forward” with dispatching troops to battle the Kurdish forces, known as the Syrian Democratic Forces, or SDF. Ankara views the group as a terrorist-linked entity, but they have fought closely with the U.S. military as a primary partner against the Islamic State.

Trump "agreed to withdraw all U.S. forces from Syria in late 2018, after speaking with Erdogan, but then reversed himself after pushback from advisers and Republican allies concerned that Turkey would slaughter America's Kurdish allies," The Week recounts. Trump last night gave Erdogan a green light.

Syria Kurdish official told us, reacting to Trump’s overnight decision.
“The Americans are traitors. They have abandoned us to a Turkish massacre.
We can no longer fight against isis and have to defend ourselves. This could allow isis to return to the region.”

A moment of American betrayal - and these moments matter. The US partnered with Syrian Kurds. Together they fought and defeated the isis state. Now Trump is abandoning the Kurds to allow a Turkish invasion. (And don’t forget the Kurds are guarding thousands of isis members...)

The Kurds fear "ethnic cleansing," "genocide," and a "Turkish massacre," NBC News' Chief Foreign Correspondent Richard Engel reports. Kurdish fighters' attention now turns to their own survival. If ISIS returns to the region, the Americans will be the ones responsible, a Kurdish official tells Engel.

"A state of absolute concern, panic even, among our very close Kurdish allies after this overnight surprise decision." -- @RichardEngel pic.twitter.com/JfOga4jEVB


This morning, Trump issued a series of tweets washing his hands of the situation. "Wag the dog" stories are sure to fly this morning. As distractions from the House impeachment inquiry go, slaughter of U.S. allies with Trump's blessing is a huge one.

Given the impeachment quagmire Trump has created for himself, it is only a matter of when and where some MAGA true-believer decides it is time to water the tree of liberty with other Americans' blood. People are going to die. But it seems Trump's Syria decision will prompt slaughter of U.S. allies overseas first.

Even Trump's white lap cat, Sen. Lindsey Graham (R-S.C.) is balking, as is a fuming Brian Kilmeade of "Fox & Friends."

Helluva Monday and a helluva distraction.