All the Trump fraud news that isn't by @BloggersRUs

All the Trump fraud news that isn't 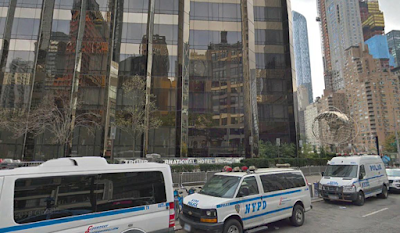 Donald J. Trump, stable genius, told lenders two of his Manhattan buildings produced twice as much in rent as he reported to taxing authorities in 2017. Trump also gave conflicting occupancy rates for his building at 40 Wall Street according to documents obtained by ProPublica's Heather Vogell through New York’s Freedom of Information Law.

Trump may call padding figures given to lenders "truthful hyperbole ... an innocent form of exaggeration," but law enforcement may see that and falsifying tax returns as anything but innocent.

Real estate professionals told ProPublica they saw no explanation for the multiple inconsistencies:

The discrepancies are “versions of fraud,” said Nancy Wallace, a professor of finance and real estate at the Haas School of Business at the University of California-Berkeley. “This kind of stuff is not OK.”

Former Trump associates Michael Cohen and Paul Manafort are in prison convicted of, among other things, falsifying tax and bank records related to real estate.

Cohen told Congress in February, “It was my experience that Mr. Trump inflated his total assets when it served his purposes ... and deflated his assets to reduce his real estate taxes.” ProPublica found documentary evidence to support that. Eight years of figures on his Trump International Hotel and Tower show the company reported gross income "only about 81% of what it reported to the lender."

Because Trump challenged his tax bill for the buildings for nine years in a row, these financial records from the notoriously opaque family business became public. ProPublica then compared them — four building in all — to tax and loan records made public when Trump’s lender, Ladder Capital, sold the debt it held in a package of mortgage-backed securities. Reporting discrepancies in two stood out:

There can be legitimate reasons for numbers to diverge between tax and loan documents, the experts noted, but some of the gaps seemed to have no reasonable justification. “It really feels like there’s two sets of books — it feels like a set of books for the tax guy and a set for the lender,” said Kevin Riordan, a financing expert and real estate professor at Montclair State University who reviewed the records. “It’s hard to argue numbers. That’s black and white.”

There's more, of course, including nine years' worth of omissions of revenues from leasing roof space for television antennas for which there is a specific line on tax forms.

Trump has an easement to lease the roof space; he doesn’t own it. But three tax experts, including Melanie Brock, an appraiser and paralegal who has worked on hundreds of New York City tax cases, told ProPublica that the income should still be reported on the tax appeals forms.

It’s hard to guess what might explain every inconsistency, said David Wilkes, a New York City tax lawyer who is chair of the National Association of Property Tax Attorneys. But, he added, “My gut reaction is it seems like there’s something amiss there.”

This time last year, a New York Times investigation concluded the Trump family's tax schemes showed a systematic pattern of "outright fraud." Trump's sister, federal appellate Judge Maryanne Trump Barry, subsequently retired in an apparent effort to head off an ethics inquiry into her conduct. The statute of limitations had run out on bringing criminal tax fraud charges for the years in question.

The same is not true for civil and criminal cases brought under city, state, and federal returns for some of the years covered by the ProPublica investigation.

Trump is fighting tooth-and-nail to keep his taxes from public view — taxes he promised to release during his campaign and never did. He's hiding something. Maybe a lot of somethings.