In case you were wondering what in the hell happened in Turkey...

In case you were wondering what in the hell happened in Turkey... 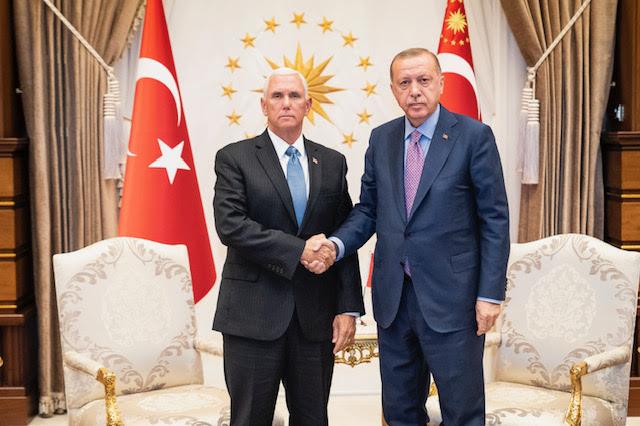 Spencer Ackerman has the low down on "the deal":

Last month, at the United Nations, Turkish President Recep Tayyip Erdoğan waved a map of northeastern Syria before the world’s dignitaries. His point was to demand U.S.-backed Kurdish fighters, whom Washington had relied upon to fight the so-called Islamic State, get out. His subtext was that he was ready to violently extend the Turkish border southward, seizing Syrian territory.

In Ankara on Thursday, Vice President Mike Pence gave Erdoğan everything the Turks wanted in the long-telegraphed war Erdoğan launched following a green light from President Donald Trump during a now-infamous Oct. 6 phone call. The U.S. did not even get the status quo ante.

The Turks did not agree to withdraw from Syrian territory. They agreed to a ceasefire, Pence announced. Over the next five days, the Kurdish forces that the U.S. abandoned are to withdraw approximately 20 miles south. In exchange, the Trump administration agreed not to implement new sanctions—Sens. Lindsey Graham and Chris Van Hollen introduced a new sanctions package as Pence briefed reporters—and, should the Turkish ceasefire hold, will lift those the administration placed on Turkey after Trump’s greenlight drew widespread backlash.

“It’s a ratification of what Donald Trump told the Turks they could do,” assessed Aaron Stein, the director of the Middle East program at the Foreign Policy Research Institute.

A Turkish official told Middle East Eye, “We got exactly what we wanted out of the meeting.” Erdoğan’s foreign minister, Mevlut Cavusoglu, even boasted that Turkey had agreed to do no more than “pause” its war for the five agreed-upon days. “We will only stop the operation if our conditions are met,” Cavusoglu said.

Pence said he and the other members of the high-level U.S. delegation in Ankara, which included Secretary of State Mike Pompeo and new national security adviser Robert O’Brien, had a brief to deliver no more than a ceasefire. “This will serve the interests of the Kurdish population in Syria,” Pence insisted, crediting the agreement to “President Trump and President Erdoğan.”

Ackerman has a lot more on how they got to this and how thoroughly Trump and his enablers have sold out their allies for reasons nobody understands. I recommend you read the whole thing.

Trump slathers praise on Erdogan: "I just want to thank and congratulate President Erdogan. He's a friend of mine and I'm glad we didn't have a problem because frankly he is a hell of a leader and a tough man, a strong man." pic.twitter.com/WywjpS6S49

This is a great day for civilization. I am proud of the United States for sticking by me in following a necessary, but somewhat unconventional, path. People have been trying to make this “Deal” for many years. Millions of lives will be saved. Congratulations to ALL!