The Bill of Indictment is a mile long

The Bill of Indictment is a mile long 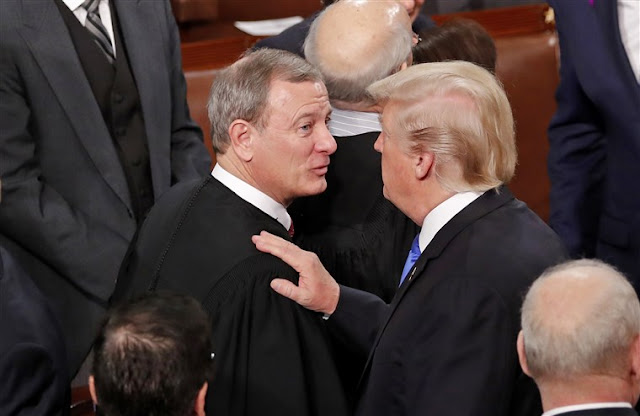 Jonathan Chait lays out the massive number of impeachable offenses against Donald Trump we already know of --- we learn something new every day.  Lord only knows what else is out there.  As he notes, the reason "high crimes and misdemeanors" are undefined is because presidents have so much power that it would be impossible to officially outlaw every possible abuse of the office. (I doubt anyone ever anticipated that a president would abuse his office quite so comprehensively as Trump in any case.)

He notes that the Democrats want an extremely narrow impeachment inquiry focused only on the one discrete abuse of power of that phone call to the Ukrainian President. (I don't understand that, but that's for another post ...) He outlines seven broad categories and 82 (82!!!) "authoritarian acts" that must be accounted for one way or another.

I. Abusing Power for Political Gain

Explanation: The single most dangerous threat to any democratic system is that the ruling party will use its governing powers to entrench itself illegitimately.

Evidence: (1) The Ukraine scandal is fundamentally about the president abusing his authority by wielding his power over foreign policy as a cudgel against his domestic opponents. The president is both implicitly and explicitly trading the U.S. government’s favor for investigations intended to create adverse publicity for Americans whom Trump wishes to discredit. (2) During his campaign, he threatened to impose policies harmful to Amazon in retribution for critical coverage in the Washington Post. (“If I become president, oh do they have problems.”) He has since pushed the postmaster general to double rates on Amazon, and the Defense Department held up a $10 billion contract with Amazon, almost certainly at his behest. (3) He has ordered his officials to block the AT&T–Time Warner merger as punishment for CNN’s coverage of him. (4) He encouraged the NFL to blacklist Colin Kaepernick.


He lists the numerous times that we know of that Trump has screwed the pooch with classified information. I don't think it's too much of a stretch to assume we only know the tip of the iceberg. Those phone call readouts probably contain more crimes than just Trump trying to boost his political fortunes by strongarming foreign leaders. We know they've hidden calls with China, Russia and Saudi Arabia under questionable circumstances.

Explanation: President Trump has abused his authority either by distorting the intent of laws passed by Congress or by flouting them. He has directly ordered subordinates to violate the law and has promised pardons in advance, enabling him and his staff to operate with impunity. In these actions, he has undermined Congress’s constitutional authority to make laws.

Evidence: (34) Having failed to secure funding authority for a border wall, President Trump unilaterally ordered funds to be moved from other budget accounts. (35) He has undermined regulations on health insurance under the Affordable Care Act preventing insurers from charging higher rates to customers with more expensive risk profiles. (36) He has abused emergency powers to impose tariffs, intended to protect the supply chain in case of war, to seize from Congress its authority to negotiate international trade agreements. (37–38) He has ordered border agents to illegally block asylum seekers from entering the country and has ordered other aides to violate eminent-domain laws and contracting procedures in building the border wall, (39–40) both times promising immunity from lawbreaking through presidential pardons.

That seems like a potent one that should be pursued if only to begin the important process of reining in presidential power which congress has been enabling for decades and Trump's henchmen saw as an opening to exert authoritarian rule. The checks and balances are unpleasant sometimes but this system doesn't work right without them.

Explanation: The executive branch and Congress are co-equal, each intended to guard against usurpation of authority by the other. Trump has refused to acknowledge any legitimate oversight function of Congress, insisting that because Congress has political motivations, it is disqualified from it. His actions and rationale strike at the Constitution’s design of using the political ambitions of the elected branches to check one another.
Evidence: (41) Trump has refused to abide by a congressional demand to release his tax returns, despite an unambiguous law granting the House this authority. His lawyers have flouted the law on the spurious grounds that subpoenas for his tax returns “were issued to harass President Donald J. Trump, to rummage through every aspect of his personal finances, his businesses and the private information of the president and his family, and to ferret about for any material that might be used to cause him political damage.” Trump’s lawyers have argued that Congress cannot investigate potentially illegal behavior by the president because the authority to do so belongs to prosecutors. In other litigation, those lawyers have argued that prosecutors cannot investigate the president. These contradictory positions support an underlying stance that no authority can investigate his misconduct. (42) He has defended his refusal to accept oversight on the grounds that members of Congress “aren’t, like, impartial people. The Democrats are trying to win 2020.” (43) The president has also declared that impeachment is illegal and should be stopped in the courts (though, unlike with his other obstructive acts, he has not yet taken any legal action toward this end).

Explanation: By virtue of his control over the federal government’s investigative apparatus, the president (along with the attorney general) is uniquely well positioned to cover up his own misconduct. Impeachment is the sole available remedy for a president who uses his powers of office to hold himself immune from legal accountability. In particular, the pardon power gives the president almost unlimited authority to obstruct investigations by providing him with a means to induce the silence of co-conspirators.

We know about the Mueller charges, which he outlines. But there's more and they are important:


He has exercised his pardon power for a series of Republican loyalists, sending a message that at least some of his co-conspirators have received. The president’s pardon of conservative pundit Dinesh D’Souza “has to be a signal to Mike Flynn and Paul Manafort and even Robert S. Mueller III: Indict people for crimes that don’t pertain to Russian collusion and this is what could happen,” Roger Stone told the Washington Post. “The special counsel has awesome powers, as you know, but the president has even more awesome powers.”

I don't know how they can just leave the following alone.

Explanation: Federal employees must follow strict rules to prevent them from being influenced by any financial conflict. Conflict-of-interest rules are less clear for a sitting president because all presidential misconduct will be resolved by either reelection or impeachment. If Trump held any position in the federal government below the presidency, he would have been fired for his obvious conflicts. His violations are so gross and blatant they merit impeachment.

Evidence: (62) He has maintained a private business while holding office, (63) made decisions that influence that business, (64) and accepted payments from parties both domestic and foreign who have an interest in his policies. (65) He has openly signaled that these parties can gain his favor by doing so. (66) He has refused even to disclose his interests, which would at least make public which parties are paying him.

Explanation: One of the unspoken roles of the president is to serve as a symbolic head of state. Presidents have very wide latitude for their political rhetoric, but Trump has violated its bounds, exceeding in his viciousness the rhetoric of Andrew Johnson (who was impeached in part for the same offense).


He goes on to lay out Trump's numerous threats and incitement to violence. It is truly chilling particularly when you think of the terrorist attacks that have echoed his rhetoric over the past couple of years.  If he loses, I suspect we will see more of it. But there's good reason not to negotiate with terrorists, much less elect them to the most powerful job in the world.  It only encourages them.

There seems to be some idea that the Democrats need to get this impeachment out of the way so they can go back to business and pass an infrastructure bill with Trump. At least that's what it sounds like they have planned.  I honestly don't understand that but I'm just a dumb old citizen and they are the experts.

I just hope they know what they're doing because that bill indictment is devastating and allowing this criminal to somehow cheat his way into another term will be fatal to this democracy.