"You have sold us. This is immoral.” by @BloggersRUs

"You have sold us. This is immoral.” 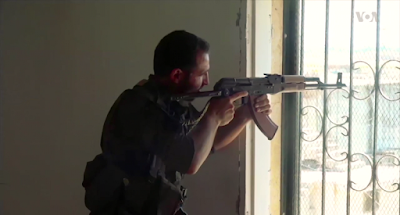 One day Donald Trump will discover the word FUBAR and begin using it at his febrile rallies. It perfectly encapsulates what his presidency has done to the United States of America. Naturally, he will apply it to his adversaries instead. You've noticed, it's a thing he does.

U.S. allies in the fight against ISIS are dying in northern Syria. Trump had another of his infamous phone calls with foreign leaders and on this one gave Turkish President Recep Tayyip Erdogan the green light to slaughter them. Ending U.S. support to the Kurds would unleash ethnic cleansing and genocide, critics warned. Turkish-allied Syrian fighters have already posted to social media a video of the executions of bound Kurdish prisoners.

Senior Kurdish political leader Hevrin Khalaf, 35, and her driver are among at least nine civilians the Syrian Observatory for Human Rights reported executed. Thousands are fleeing for their lives.

The proxies are Syrian former rebels who had fought against the regime of the country’s president, Bashar al-Assad, before being co-opted early last year to fight Kurdish groups in the north-western town of Afrin. Some of the rebel factions among the Turkish alliance had previously been supported by the US and Qatar in the early years of the Syrian war.

But as the war morphed into a series of intertwined conflicts and the Syrian opposition steadily disintegrated, rebel alliances shifted. The Arabs now leading the fighting have received widespread training and support from Turkey.

The first video of the killings, posted on the Twitter account of the Ahrar al-Sharqiya rebel group, shows two people in civilian clothes kneeling on the ground as a fighter next to them announces they have been captured by the faction.

In the second, an unidentified fighter opens fire at a person on the ground wearing civilian attire.

The Observatory confirmed the authenticity of the videos but Agence France-Presse could not independently verify them.

A commander of the SDF tells CNN:

"You have given up on us. You are leaving us to be slaughtered," Gen. Mazloum Kobani Abdi told the Deputy Special Envoy to the Global Coalition to Defeat ISIS, William Roebuck, in a meeting Thursday, according to an internal US government readout that has been obtained exclusively by CNN.

"You are not willing to protect the people, but you do not want another force to come and protect us. You have sold us. This is immoral," Mazloum added.

Turkey launched its long-threatened incursion into Syria after President Donald Trump ordered a small contingent of about 50 US troops to be pulled back from the border area amid a belief that a Turkish incursion was imminent. Before that, as a confidence building measure with Turkey, the US convinced Kurds to dismantle their defensive fortifications along the border and pull their fighters back. The US said Turkey had agreed to the arrangement which sought to prevent unilateral Turkish military action.

“Trump has helped Turkey kill us,” said Lava Ibrahim, 24. She and her sister emigrated to the U.S. seven years ago and found safety in Columbus, Ohio. On Saturday, they joined hundreds of Kurds outside the White House protesting Trump's abandonment of their relations. Former neighbors have died. Reuters reports their 70-year-old grandfather had to flee his home.

“He said he’s watching the situation closely, but what is he watching?" Ibrahim said. "We did everything for the United States, and he’s letting us die.”

Protesters are pleading for empathy from a damaged man who has none to give.

Trump's 2016 voters wanted someone from outside government. Someone with no experience. They got one.

The Guardian reports "at least 750 people with suspected links to Islamic State" have fled a displacement camp in north-east Syria. Turkey's Trump-assisted offensive could lead to a resurgence of the terrorist state.

Sometime back I created a meme depicting some of the men associated with the invasion of Iraq and the subsequent death and destruction there. That invasion helped create ISIS. Donald Trump claims credit for defeating ISIS. Don't expect him to take credit for its rebirth.

The occasion may require a new meme featuring Don, Bill, Mike, and Stephen.