Come and see the show by @BloggersRUs

Come and see the show 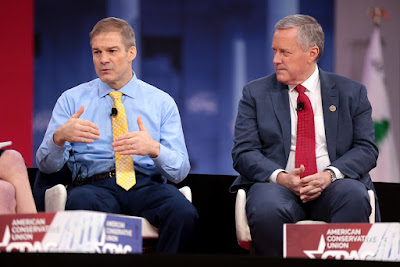 Former PBS host Bill Moyers tells CNN he fears for the United States, "for the first time, because a society, a democracy, can die of too many lies. And we're getting close to that terminal moment, unless we reverse the obsession with lies that are being fed around the country." Moyers and colleague Michael Winship bought a full page ad in the New York Times urging PBS to rebroadcast the impeachment hearings in prime time. Hearings begin Wednesday. PBS rebuffed their request:

"If you want to get the whole story of Trumpgate, you need to watch the whole hearing," he said, noting that many Americans will be at work and at school during the testimony, unable to watch in real time.

"This is a moment in American history where the arc of justice will either be bent forward or it will be bent backward," he said. "So everyone who wants to see it should have the chance to see the whole story."

Moyers also noted that "you never know what's going to happen in the hearings."

Oh, I think we do if the GOP has anything to say about it. Republicans have added Rep. Jim Jordan (R-Ohio) to the House Intelligence Committee where hearings begin. They plan to tailor their performances to an audience of one. The acting president will be watching (Politico):

“Depositions are being reviewed to show the inconsistencies from facts that we know exist," Meadows added.

“Jim Jordan has been on the front lines in the fight for fairness and truth,” McCarthy said in a statement. “His addition will ensure more accountability and transparency in this sham process.”

(Was I right about the coffee?)

The president wants a spectacle. Republicans plan to stage one.

“You want your best contributors for ‘showtime.’ Driving public opinion is key to many — on both sides of the aisle,” one GOP lawmaker said. “Jordan is definitely a showman.”

Welcome back, my friends
To the show that never ends
We're so glad you could attend
Come inside! Come inside

By the rules, Jordan will get one five-minute round of questioning "unless other rank-and-file members yield their time to him." They will.

The New York Times Editorial Board this morning provides a "field guide" to the GOP line of counterattack on "facts that we know exist," everything from "quid pro no" to "quid pro so?" to, finally, "This is a coup by the Deep State! A decorated American soldier is a Ukrainian agent! The witnesses who have testified are 'Never Trumpers'!"

Come inside, the show's about to start
Guaranteed to blow your head apart
Rest assured you'll get your money's worth
The greatest show in Heaven, Hell, or Earth