Devin Nunes is committed by @BloggersRUs 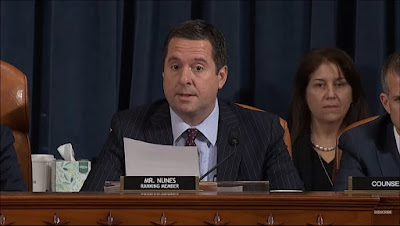 "Ambassador Sondland, you are here today to be smeared," Nunes said Wednesday morning. He was clearly unprepared for testimony by European Union Ambassador Gordon Sondland that implicated "everyone" in the Ukraine arms-for-political dirt scheme, including President Donald Trump, Vice President Pence, Secretary of State Mike Pompeo, and Rudy Giuliani. "Everyone was in the loop."

In his opening remarks, Nunes listed a series of facts he claimed Special Counsel Robert Mueller failed to prove. Salon sampled a few from what Nunes branded false charges:

“Trump had a diabolical plan to build a Trump Tower in Moscow,” he said. (True.) “Trump changed the Republican National Committee platform to hurt Ukraine and benefit Russia,” he added. (True.) “Trump's son-in-law lied about his Russian contacts while obtaining his security clearance,” he continued. (True.)

“It's a long list of charges, all false,” Nunes declared of the largely corroborated list of allegations.

Nunes insists it was Ukraine and the Democrats that interfered in the 2016 election, that "their operatives got campaign dirt from Ukrainians in the 2016 election" [timestamp 3:16:15]. Why do that? Because Nunes is not speaking to "those of you at home," as he claims. He is playing to an audience of one in the White House, to someone who actually believes this nonsense and/or wants to see his minions repeat it.

The audience in the hearing room thinks Nunes and his spewings are as much a joke as his suing a fake cow earlier this year. Nunes is committed to debasing himself to serve his liege.

Nunes has been at the center of the broader story about foreign influence in President Donald Trump’s Washington. When congressional investigators began probing Russian interference in the 2016 campaign, Nunes made a late-night visit to the White House and announced the next day he’d found evidence of egregious wrongdoing by Intelligence Community officials. The move appeared to be an effort to corroborate a presidential tweet claiming that Obama wiretapped Trump Tower. Nunes then stepped back from the committee’s work scrutinizing Russian efforts. Instead, he ran a parallel probe looking at the origins of Mueller’s Russia probe. The undertaking made him a hero to the president and Sean Hannity, and a bête noire of Democrats and Intelligence Community officials. That work was still underway when he traveled to Europe in 2018.

Prosecutors from the Southern District of New York last month charged Parnas and colleague Igor Fruman with (among other things) conspiring to violate campaign finance laws by laundering foreign money through straw donors and dummy businesses to U.S. campaigns. Parnas and Fruman, U.S. nationals, sought to “advance the political interests of... a Ukrainian government official who sought the dismissal of the U.S. ambassador to the Ukraine.”

The Ukrainian government official was Ukraine's former chief prosecutor Yuriy Lutsenko. The U.S. ambassador eventually forced out in May is Marie Yovanovitch. Lutsenko had "sharp disagreements with Yovanovitch over his handling of corruption cases, and was also seeking to curry favor with the Trump administration," according to two former U.S. officials.

It was not a good day for Nunes. Twitter took notice.


It was not the first time this week Nunes was the butt of viral jokes.

But let's not pile on.

Update: Earlier version identified Nunes as a Florida congressman. I had a Matt Gaetz moment.