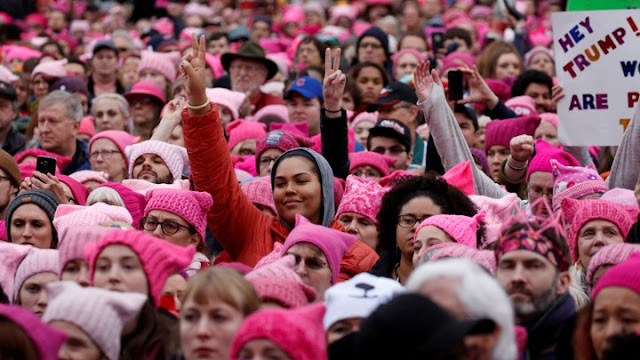 If you are looking for some interesting fodder for a Thanksgiving conversation about politics, I recommend this piece by Ron Brownstein:


History signals that the public's final verdict on President Donald Trump's possible impeachment won't be delivered until the 2020 election -- whatever happens next in the House and Senate, and however Americans react to it.


The public reactions to impeachment proceedings against Presidents Richard Nixon in 1974 and Bill Clinton in 1998 fundamentally diverged, with most Americans ultimately supporting the former and a consistent majority opposing the latter.

Yet the outcomes in the next presidential elections converged. In each case, the president's party lost the White House to a candidate -- Democrat Jimmy Carter in 1976 and Republican George W. Bush in 2000 -- who played off lingering public unease about the scandal that had precipitated the impeachment process against their predecessor. In each instance, impeachment functioned like a leak that corroded the foundation under the president's party in the next election.

Those precedents suggest the revelations about Trump's conduct in the Ukraine investigation could complicate his path to a second term, whatever polls say now about the public response to his potential impeachment and removal from office. Recent polls indicate that while the controversy is not reducing the share of Americans who approve of Trump's job performance, it does appear to be hardening the opposition he faces among those who disapprove of him.

"The whole impeachment debate has intensified preexisting feelings about the President," says Republican pollster Whit Ayres. "Most people who like him do so with their eyes wide open. ... They understand his strengths and his weaknesses and they prefer him to the alternatives as they see it. On the other hand, people who dislike him will be even more appalled because what they are seeing reinforces their existing views."

The risk for Trump in that dynamic is that a majority of 51 to 55% of Americans have consistently said they disapprove of his performance, while only around 40 to 45% have usually said they approve. Even if Americans remain closely split on whether Congress should impeach and remove Trump from office, the scandal may be solidifying a division of attitudes that forces him to find a path to reelection without support from anything close to a majority of the electorate.

"At the very least it is deepening a lot of Trump's problems," says Democratic pollster Geoff Garin. "I think it is confirming for voters that Trump is a person lacking in integrity and ethical standards in a way that is particularly concerning to college-educated men. And I don't think we are done with the impeachment story yet."

Impeachment provided a critical backdrop to both the 1976 and 2000 elections, which followed the proceedings against Nixon and Clinton. Nixon resigned in August 1974 after the House Judiciary Committee approved impeachment articles against him; the Senate failed to remove Clinton in February 1999, after the Republican-controlled House of Representatives voted on a near-party-line basis to impeach him in December 1998.

The public reaction to these two confrontations utterly diverged. During the long gestation of the Watergate scandal, from early 1973 through Nixon's resignation, support for his impeachment slowly grew and his job approval rating steadily eroded. In Gallup polling, a majority of Americans supported Nixon's removal from office only in the final survey before his resignation; by then his approval rating had fallen to about 24%, though it remained around 50% among Republicans.

By comparison, public opinion remained remarkably stable through 1998 during the House GOP's long march toward impeaching Clinton. Consistently in Gallup polling through that year, Americans opposed his impeachment and removal by about 2 to 1, and his approval rating remained well above 60%.

Yet, despite these differences in the immediate public reaction, the presidential campaigns that followed these two impeachment proceedings unfolded with some striking parallels. In each case, the party that drove the impeachment inquiry won the next presidential election. And in each instance, that party did so behind a nominee who did not dwell on the scandal that had prompted impeachment -- but unmistakably presented himself as the antidote to it.

Jimmy Carter, the Democratic former Georgia governor, did not stress Watergate during the 1976 campaign, insisting the American people had heard enough about it. But Watergate still infused everything about his campaign. Carter centered his candidacy not on a big, ambitious policy agenda but on an overriding promise to unify the nation and restore to America "a government as good as its people." That struck a powerful chord with voters exhausted by Watergate and allowed Carter, a one-term Georgia governor and former peanut farmer, to overcome doubts about his experience and narrowly defeat Gerald Ford, who had served as Nixon's vice president and then succeeded him as President after Nixon's resignation.

In 2000, George W. Bush likewise did not dwell on the affair with a White House intern that triggered Clinton's impeachment. But it too infused Bush's campaign. Like Carter, Bush presented himself as a unifying figure, "a uniter, not a divider," in his phrase. And the Clinton scandal provided the backdrop for Bush's core promise in 2000: to "restore honor and dignity to the Oval Office." That messaging helped Bush squeeze out his narrow Electoral College victory over Al Gore, Clinton's vice president, even while narrowly losing the popular vote.

As Tad Devine, one of Gore's top strategists, told me earlier this year, Bush skillfully found ways to tap the unease over Clinton's behavior without directly embracing the unpopular impeachment itself.

"It became a very valuable tool even though Bush didn't go around saying, 'Impeachment, impeachment,' " Devine told me. "He took the bad stuff from impeachment and put it front and center [in the campaign]. What could Gore say? 'I'll restore honor too'?"

Public opinion over Trump's possible impeachment has followed a middle course between these two examples. Support for impeachment jumped to around 50% after Democrats formally announced their inquiry in September but has stagnated since then. Trump's job approval ratings have remained almost unchanged: In a new CNN survey conducted by SSRS and released this week, 50% of Americans supported Trump's impeachment and removal, a number unchanged since October. His job approval rating stood at just 42%, with 54% disapproving. Through all of this year, his approval rating in the CNN poll has varied only between 39% and 43%.

In another important regard, Trump's situation differs decisively from these precedents: Unlike Nixon and Clinton, Trump himself will be on the ballot in 2020 if the House impeaches him and the Senate does not vote to remove him from office. Under that scenario, Trump would become the first impeached president to appear on the next general election ballot. (The only other president who faced this sanction was Andrew Johnson, Abraham Lincoln's vice president, who was impeached but not removed by the Republican-led Congress in 1868; Johnson sought to run again that year as a Democrat but didn't win the nomination.)

Trump's presence on the ballot might change the dynamic from the Nixon and Clinton precedents in some respects -- but likely won't alter them in others. The biggest difference is that unlike Ford or Gore -- who did not attempt to relitigate whether impeachment had been appropriate for the presidents they had served under -- Trump will likely try to mobilize more turnout from his core backers by insisting he was unfairly persecuted by an "unholy alliance" of Democrats, the media and the deep state, as he put it during a recent rally.

"Supporters take away he's a fighter, that he's never backs down, that he never gives in to the carping critics and that he will stand his ground no matter what the situation and hold his head high in the face of unrelenting criticism," he said.

But Ayres, like a wide array of Democratic strategists, agrees the revelations in the Ukraine investigation are serving just as powerfully to reinforce the doubts Trump faces among those skeptical of him.

"It is another strike against him," says Josh Schwerin, senior strategist and communications director for Priorities USA, a leading Democratic Super PAC. "It reinforces the negative feelings they have about his actions and the way he carries himself."

He goes on to explain how the "lesser of two evils" argument could play out and points out that "Trump fatigue" is a real possibility. I thought this was an interesting analysis and one that could bring an informative dimension to political discussions people may be having this week-end. I don't know exactly how this might affect the campaign of your favorite candidates but it seems to me that if the argument is that the Democrat will return the presidency to decency and honesty, they are all winners. .