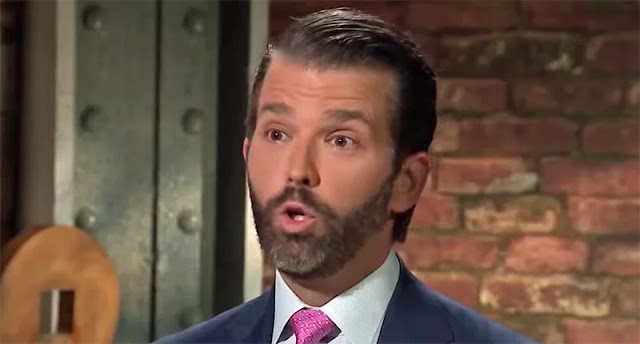 We knew this swiftboating was coming. I wrote about the fact that Republicans have been dissing troops since the 1950s for Salon last week. Here is the story from the NY Times. It's pathetic of course, but the most pertinent detail, and it's a big one, is that this story was amplified by Donald Trump Jr who is apparently taking on the role Roger Stone would have had if he weren't on trial:

Days after a decorated Army lieutenant colonel offered damaging testimony about President Trump’s conduct on a July phone call with Ukraine’s leader, Mr. Trump stood on the South Lawn and issued a vague but ominous warning.

Mr. Trump was not more specific. But an attack on Colonel Vindman’s character and motives was already making its way from the dark corners of Mr. Trump’s social media following to the front lines of the impeachment battle.

One day earlier, the right-wing commentator Jack Posobiec had retweeted a lengthy thread by a Florida man — a fan of QAnon, a fringe conspiracy about the “deep state” — claiming to have witnessed Colonel Vindman “bash America” in conversation with Russian officers during a joint military exercise in Germany in 2013.

That accusation was unsubstantiated and has been rejected by some of the colonel’s colleagues. Even so, Mr. Posobiec’s post was retweeted by Mr. Trump’s son and chief defender, Donald Trump Jr., driving it through conservative social media circles and onto pro-Trump websites, whose stories the younger Mr. Trump promoted to his four million followers.

“Anyone who’s been watching for the past three years is not at all surprised that this would be their ‘star witness,’” Donald Jr. posted about Colonel Vindman, who had testified that he was concerned about the United States’ linking of military aid to Ukraine with an investigation of Mr. Trump’s political rival.

While the White House has scrambled to mount an organized response to the House impeachment inquiry — there is no consistent message from Mr. Trump’s team and little formal guidance to surrogates — Twitter has become the Trump war room. The president and his supporters, including his family, have used Twitter to frame his defense, torch his Democratic inquisitors and try to undermine public officials, like Colonel Vindman, who have testified against him.

It is hard to discern how the six-year-old comments attributed to the officer affect the veracity of his testimony on Capitol Hill, which aligns with that of numerous other witnesses. But by questioning the colonel’s loyalties, partisans who are spreading the story uncritically to millions of Americans leave the impression he is somehow not to be believed.

The attack emerged late on Halloween night, when a retired Army officer, Jim Hickman, claimed he had overheard Colonel Vindman — a major at the time who was chatting with Russian soldiers during a military exercise — laugh “about Americans not being educated or worldly” and talking up “Obama & globalism to the point of uncomfortable.” Mr. Hickman said he took the major aside and reprimanded him.

Through his lawyer, Michael Volkov, Colonel Vindman declined to comment.

Mr. Hickman, a former lieutenant colonel whose service record indicates he served in Afghanistan and earned a Purple Heart, at some point took an interest in QAnon. A review of his past tweets found more than 100 in which he recirculated or commented on QAnon-related theories, including hoaxes about Satanism and pedophilia, and until recently he had the hashtag #Q in his profile. Reached for comment, Mr. Hickman said he did not believe in QAnon but found it “interesting.”

“I do think it’s actually been pretty accurate on predicting a lot of things,” he said.

He has also tweeted strident pro-Trump, anti-Democratic themes, writing, “It’s incredible how evil the Democrat party is.” A week before going public with his story about Colonel Vindman, he retweeted a Trump supporter urging: “STOP IMPEACHMENT! STOP THIS COUP!”

In a Twitter thread, Mr. Hickman, who said he was disabled from combat injuries and living in Florida, said he had helped manage joint exercises in Germany involving United States and Russian soldiers. He met Colonel Vindman there in 2013, he said.

Colonel Vindman referred to himself as a patriot during closed-door testimony in the House last month, and said he had reported concerns about the president and his inner circle’s conduct out of a “sense of duty.” The colonel received a Purple Heart after being injured by an improvised explosive device in Iraq. He now serves on the National Security Council.

Several officials have publicly defended the colonel since his testimony emerged. General Joseph F. Dunford Jr., the former chairman of the Joint Chiefs of Staff, has called the colonel “a professional, competent, patriotic and loyal officer.” Michael McFaul, the former ambassador to Russia, has said he had worked with the colonel “and interacted with him in front of Russian officers. He never once said anything near what this ‘retired Army officer’ claims.”

Mr. Hickman appears to have first shared his story in a private “DM room” on Twitter, where people can send direct messages to one another. He said in a tweet that he had forgotten about the encounter with Colonel Vindman, but that his Army friends “reminded me of what happened and it all came back,” adding “Damn TBI,” a reference to traumatic brain injury.

Ok, the "Q" thing should put this to bed. But unfortunately, it won't. Trump himself teased this ridiculous story so the wingnuts will run with it.

As the tale gained attention on Twitter, and received pushback from some who questioned it, a new Twitter account popped up with the name Thomas Lasch, tweeting that he had worked with Mr. Hickman and remembered the 2013 episode.

Mark Hertling, a retired general who was suspicious of the pair and contacted them through direct messaging, later tweeted: “They are who they say they are.” But he added that “LTC Hickman and I agreed to disagree on LTC Vindman and many other things.”

In an interview, General Hertling, who commanded the United States Army in Europe, said that a number of things about Mr. Hickman’s recollections did not add up, including his claim of hearing what Colonel Vindman, who was born in Ukraine, said to Russian soldiers.

“Vindman would’ve been speaking to Russian soldiers in Russian, not English,” he said. “Russians, when they come to these exercises, they don’t speak English — they take pride in it.”

General Hertling added: “I asked Hickman about that, and he said, ‘Well, they were going back and forth between Russian and English.’”

An effort to reach Mr. Lasch was unsuccessful. At his home in Homosassa, Fla., Mr. Hickman said, “All I want is the truth to get out.”


How did this get out? Well, guess. Good old Pete Hegseth, defender of war criminals:

Within a day of Colonel Vindman’s testimony, conservative media figures on Fox News and elsewhere, as well as Republican surrogates like Rudolph W. Giuliani, raised questions about whether the Ukrainian-born colonel had “dual loyalties.” Some even pushed the innuendo that he could be some sort of spy for Ukraine.

On Monday, Mr. Hickman’s tweets were picked up by a pro-Trump web magazine, American Greatness, in an article that was promoted by Mark Levin, a talk radio host and vociferous Trump defender. On Wednesday, Pete Hegseth, a host on the Fox morning show “Fox & Friends” — arguably the president’s favorite cable news show — also tweeted the article.

“Guys I’ve served with — and trust with my life — served with LTC Vindman and saw the same thing,” Mr. Hegseth said. “He’s been a partisan from the beginning.”

But those who know and have worked with him have provided a different account. They said that Colonel Vindman, then a military attaché, was assigned to meet with Russians and gather whatever intelligence he could.

He spoke to the Russians in Russian, did not denigrate the United States and reported everything he heard, according to a person briefed on the episode, speaking on the condition of anonymity because the colonel had not publicly testified. Colonel Vindman did not have dealings with Mr. Hickman in relation to his work during the exercise, the person said, and was not reprimanded for it.

Peter B. Zwack, a retired brigadier general who was Colonel Vindman’s commanding officer during the joint exercise, said he was skeptical of Mr. Hickman’s account.

“If there was something egregious that occurred, believe me, we would have had our ears rapped in Moscow,” said General Zwack, who served as the United States’ senior defense official and attaché to Russia.

“The bottom line is, where there are Russians in an exercise in and among our units and people, we have an attaché that coordinates with them,” the general said. “It’s all just a part of an attaché’s job.”


This is disgusting but we all know it's nothing new. Look what they did to John Kerry. This poor guy isn't even involved in politics and he's getting it. But that's just how they roll:


On Wednesday morning, Donald Trump Jr. tweeted out an article purporting to name the whistle-blower.

He later denied coordinating with the White House.

The is the Trump impeachment war room -- smears on twitter and Fox News. So far that seems to be good enough for Trump voters.