Oh look, somebody read the transcripts

Oh look, somebody read the transcripts 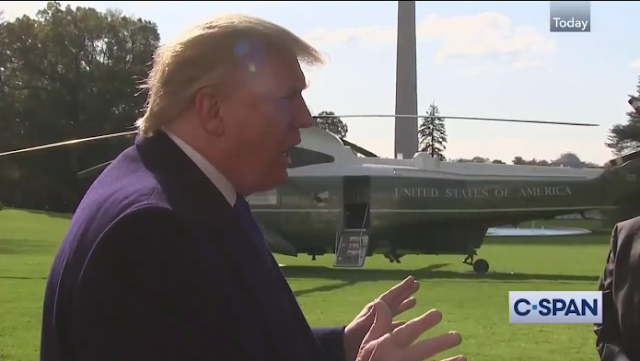 Tamara Keith at NPR read them:

When the House impeachment inquiry began more than a month ago, much of the focus was on a complaint from a whistleblower that drew attention to a July 25 phone call between President Trump and Ukrainian President Volodymyr Zelenskiy, during which Trump asked for investigations into potential political rivals.

The whistleblower accused Trump of abusing his office for political gain and laid out a road map that House Democrats have followed in their investigation.

Trump has spent weeks questioning the whistleblower's motives and slamming the account for being inaccurate. But as this annotation shows, most of the complaint has been corroborated during closed-door depositions of administration officials, through public statements and from a rough transcript of the call itself, released by the White House.

Click here to read the annotated document. It's not long. Send it to your Trump relatives. It's pretty devastating.

To President Donald Trump, the whole flap with Ukraine is over a "perfect" phone call.
"It's based on a single phone call of congratulations to the President of Ukraine, which they fraudulently mischaracterized to sound absolutely horrible," Trump said a few weeks ago of his July 25 call with the Ukrainian President cited by a whistleblower complaint.
But a review of more than 2,600 pages of transcripts released this week from eight witnesses who have testified in the House impeachment inquiry over the past six weeks shows how controversy over Trump's Ukraine policy had been brewing inside the US government for months. It roiled efforts to bolster a key strategic alliance after Trump enlisted his own personal attorney to work outside normal diplomatic channels in an apparent effort to bolster his reelection chances.
The testimony details how top US officials were alarmed that Trump had outsourced Ukraine policy to his attorney, Rudy Giuliani, who had pushed top Ukraine officials to publicly announce an investigation into the Bidens and to pursue a conspiracy theory that Ukraine interfered in the 2016 elections to help Democrats. Giuliani's efforts, with support from the President, led to the ouster of America's top diplomat in Ukraine, who stood in his way, while enlisting emissaries who have since been indicted.
Moreover, the testimony shows a President detached from the integral role Ukraine plays in US policy against Russia -- but also animated in his agitation toward Ukraine. And the testimony of at least one witness links Trump to the decision to withhold nearly $400 million in security aid for Ukraine until that country announced it would pursue the investigations into his political rivals.
Yet, there still remains one unanswered question: Why was the aid delayed by the White House? While there's ample circumstantial evidence pointing the finger at the President's desire to push Ukraine to publicly announce a probe of his political rivals first, the White House has blocked key figures -- like acting chief of staff Mick Mulvaney -- from testifying, and they could shed more light on the decision to withhold the aid.
"It actually came as a direction from the Chief of Staff's office," said Fiona Hill, who was a top Russia adviser at the White House.


You can click the link for all the details and I highly recommend that you do it if you have the time. It's not too long. But it's an excellent primer on the case as it stands today.

The one thing that goes unsaid is that one again, Trump's decision benefitted Russia. At some point, you have to stop wondering why he does what he does and just accept that he's doing it to please Vladimir Putin. We don't know why he is so hellbent on doing that but there really is no question that he is doing it.