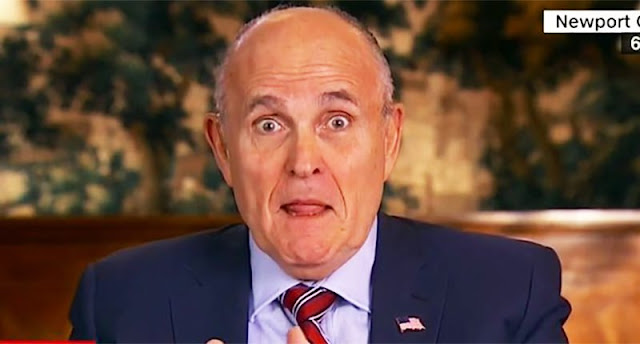 Towards the end of Wednesday’s morning session, attorney Steve Castor pressed EU Ambassador Gordon Sondland on his communication with Giuliani.

Sondland confirmed that there was “not a lot” of it. Castor tried to push Sondland’s conclusion a step further by adding that former special envoy to Ukraine Kurt Volker testified that Giuliani “was doing his own communications,” implying a separation from the President. Castor seemed to be trying to isolate Giuliani as acting under his own volition after Sondland testified in his opening statement that Giuliani was the conduit for President Donald Trump’s Ukraine desires.

Castor then hammered the nail the rest of the way in.

Republican lawyer doesn’t do his own research and preparation, and is instead picking up Democrat lies, shame.

Allow me to inform him: I have NO financial interests in Ukraine, NONE! I would appreciate his apology.

He has good reason to be a little bit agitated about this:


Federal prosecutors are planning to interview an executive with Ukraine’s state-owned gas company as part of an ongoing probe into the business dealings of Rudy Giuliani and two of his Soviet-born business associates.

A lawyer for Andrew Favorov confirmed Tuesday that he is scheduled to meet voluntarily with the U.S. Justice Department. Favorov is the director of the integrated gas division at Naftogaz, the state-owned gas provider in Ukraine.

Federal prosecutors in New York are investigating the business dealings of Giuliani, President Donald Trump’s personal lawyer, including whether he failed to register as a foreign agent, according to people familiar with the probe. The people were not authorized to discuss the investigation publicly and spoke on the condition of anonymity.

Giuliani’s close associates, Lev Parnas and Igor Fruman, were arrested last month at an airport outside Washington while trying to board a flight to Europe with one-way tickets. They were later indicted by federal prosecutors on charges of conspiracy, making false statements and falsification of records.

Following an inquiry from The Associated Press, Favorov lawyer Lanny Breuer confirmed his client is set to meet with prosecutors.

“The Department of Justice has requested an interview,” Breuer said. “He has agreed and will voluntarily sit down with the government attorneys. At this time, it would not be appropriate to comment further.”

Breuer declined to say when or where Favorov, who has dual U.S.-Russian citizenship and lives in Ukraine, will be meeting with prosecutors.

Jim Margolin, a spokesman for the U.S. Attorney’s Office in the Southern District of New York, declined to comment.

According to a federal indictment filed last month, Parnas and Fruman are alleged to have been key players in Giuliani’s efforts earlier this year to spur the Ukrainian government to launch an investigation of Democratic presidential contender Joe Biden and his son Hunter.

The two men’s efforts included helping to arrange a January meeting in New York between Giuliani and Ukraine’s former top prosecutor, Yuri Lutsenko, as well as other meetings with top government officials.

While the House impeachment hearings have focused narrowly on Giuliani’s role in pursuing Ukrainian investigations into Democrats, the interest of federal prosecutors in interviewing Favorov suggests they are conducting a broader probe into the business dealings of Giuliani and his associates.

Rudy's insane so who knows what he did and why. But it seems clear that people who were allegedly crusading against Ukraine corruption were actually in Ukraine to make corrupt deals on their own behalf.

Rudy will need a pardon and he's not exactly being coy about it. But he has to look at old Paul Manafort moldering in federal prison as we speak and wondering if he going to get one. He knows things, of course. But who's going to believe him now that his reputation is shredded? He says he has "insurance." It had better be documented.