They got Roger Stone

They got Roger Stone 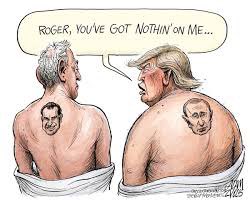 I thought this twitter thread by Roger Stone documentary biographer succinctly captures the import of the Stone verdict.

I have a lot of thoughts about Roger's conviction and this thread won't do them justice. But let me try.
It's hard having spent 5 1/2 years and hundreds upon hundreds of hours with Roger not to feel compassion for him at this, the worst moment in his life. Above all, I feel sorry for his wife, daughter and family. They don't deserve to suffer for Roger's downfall.
That being said, Roger's conviction today was completely of his own making. This was not the deep state taking him down. This was the very easiest possible case for the prosecution to prove because Roger put all of his threats and lies in writing.
Roger's crimes were completely unnecessary and served no purpose other than to puff up and protect his relationship with Trump. He didn't lie to Congress for any logical reason and it was utterly nonsensical for him to threaten Randy Credico.
As @dandoesdocs, @dylan_bank and I showed in our film, Roger has a long history of being his own worst enemy. The crimes that led to his conviction are the most stunning example of all of Roger's tendancy to self-destruct. No one brought Roger's downfall upon him but himself.
Roger's career has thrived in part because of his galling hubris. And as anyone who has studied Greek tragedy knows, hubris catches up with everyone in the end.

There is something strikingly anti-climactic about Roger going down because of these specific crimes, which, compared to the magnitude of the irreparable damage he has done to our democracy, are rather small bore.
Roger's conviction on these charges is the equivalent of Al Capone going down for tax evasion.
Roger was integral in creating the K Street Swamp, opening the floodgates for unlimited money to destroy our politics, poisoning our discourse with negative advertising, undermining faith in our electoral system, and weaponizing the media to spread disinformation.
Roger played a major role in breaking our political system in America and because it is now so broken is a large part of the reason that he was never held accountable for the structural damage he has done to it.
There was a part of me that thought, even in the face of such a powerful case, that Roger would somehow escape in the end and get the last, nefarious laugh. Perhaps Trump will pardon him and that will still be the case.
It's important to note that Roger's crimes were motivated in large part because of his desire to remain important in Trump's eyes during the campaign and then to remain loyal to President Trump, clearly to Roger's own disastrous detriment.
One would think that Trump would reward Roger for his decades of undying loyalty by granting him a pardon. But there is certainly ample reason to doubt that this will be the case.
mentions I wonder how much faith Roger puts in Trump's loyalty. My guess is not a lot.
The x factor here is what does Roger know about Trump that can damage Trump at this point. Few people know the dark shadows of Trump's pre-Presidential life better than Roger. But is there anything Roger knows that is so problematic that Trump fears it coming out?
I suspect that the answer to this question will determine whether Stone gets a presidential pardon, not his decades of loyalty to Trump.
To discover more about Roger's singular life and the chilling effect he's had upon your life, watch #GetMeRogerStone on Netflix, which I co-directed with @dandoesdocs and @dylan_bank.

I don't believe in karma generally but in this case it's hard not to.