Worser and worser by @BloggersRUs 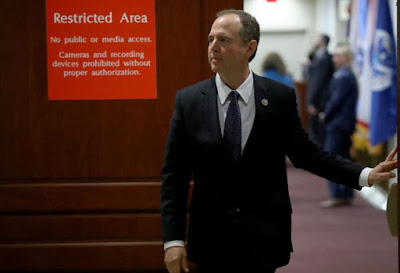 Military surplus sites have long peddled a cocky, in-your-face tee shirt that reads, "JOIN THE MARINES! TRAVEL TO FOREIGN PLACES, MEET EXOTIC PEOPLE, AND KILL THEM." Millionaire Gordon Sondland thought he would be doing the diplomatic equivalent by donating enough to a presidential candidate to garner an ambassadorship. He would join the diplomatic corps, travel to foreign capitals, hobnob with heads of state. "And go to jail" was not what the naif had in mind.

Now Ambassador to the European Union, Sondland this morning takes the hottest seat yet when he is sworn in to testify before the House Permanent Select Committee on Intelligence. His original testimony in the Ukraine affair, already amended, will receive close scrutiny from Democrats on the committee. Their questions will look to tie President Donald Trump directly to the arms-for-political-dirt scheme revealed in a call between the White House and Ukraine's President Volodymyr Zelensky. Reported by an anonymous whistleblower, that July 25 call precipitated the ongoing House impeachment inquiry.

Democrats may be Sondland's only "friends" on the panel. Republicans are setting him up (with Rudy Giuliani, Trump's personal attorney) as a fall guy in the scandal.

WATCH: At a public event in 2016, Sondland spoke out saying he's good at politics because he's good at using "quid pro quos." Sondland said he also finds it "unfortunate" that there aren't more quid pro quos or "transactional" deals used in government and politics. pic.twitter.com/P2GgVcz6gN


Democrats will ask why in his original testimony Sondland failed to disclose his July 26 restaurant call to Trump in which they discussed whether Zelensky would publicly announce an investigation into Trump political rival, former Vice President Joe Biden. They will ask for details of another call prior to the Trump-Zelensky conversation on July 25. Sondland is thought to have briefed Trump on what to say to Zelensky. Shortly thereafter, Trump told Zelensky, "I would like you to do us a favor though ..." after Zelensky expressed interest in buying Javelin anti-tank missiles. Trump asked for an investigation into Biden and a debunked conspiracy theory about Ukraine interfering in the 2016 election. The consensus of the U.S. intelligence community is it was Russia.

Mr. Sondland is the witness who most concerns people close to Mr. Trump, several of them said, expressing worry that he interacted directly with the president about Ukraine and that they do not know what he will say. Mr. Sondland has already amended his testimony once, in writing.

Mr. Sondland’s recollection of his July 26 call with Mr. Trump might never have been questioned had not another American official overheard the conversation, conducted from Mr. Sondland’s lunch table on the terrace of a restaurant in Kyiv, the capital of Ukraine. Mr. Trump was speaking so loudly that Mr. Sondland held the phone away from his ear, broadcasting the call to his dining companions.

David Holmes, an American Embassy official in Kyiv who had joined the ambassador for lunch, said he clearly heard Mr. Trump ask whether Volodymyr Zelensky, Ukraine’s newly installed president, was “going to do the investigation.” Mr. Sondland replied: “He’s going to do it.”

"Will he do it?" is the question again this morning with cameras rolling. Sondland faces a choice of standing by his earlier testimony (contradicted by prior witnesses) or answering fully and truthfully no matter how it reflects on Trump. Courts have already convicted other Trump associates for lying under oath, including Trump confidant Roger Stone last week.

Of the witnesses appearing in public so far, none have been helpful to the president, even those requested by Republicans on the committee. Things just look worse. Trump has lost three of four statewide races this month that he'd made tests of his ability to elect Republicans. As Trump's polling numbers erode, Republican allies may find their enthusiasm for defending him flagging unless they can pin the arms-for-political-dirt scandal on a convenient patsy. How they treat Sondland this morning may indicate their choice.

Mr. Sondland once described himself as a “results-oriented,” take-charge type. Now investigators are asking him why he pushed a so-called deliverable for the president — an announcement of the investigations — that other officials have said was ethically wrong and ran counter to American national security interests.

Mr. Sondland also liked to present himself as a refreshing alternative to hidebound bureaucrats. Now some of those same bureaucrats have described him as an aggressive operator who elbowed them out of the way, rejected time-honored protocols and turned his personal cellphone into a national security risk.

Sondland's attention-getting donations to the Trump campaign meant he could boast he was harder to reach than the president he could call on a whim. How cool is that?

Much cooler than the seat he'll occupy this morning.