All the president's alchemists by @BloggersRUs

All the president's alchemists 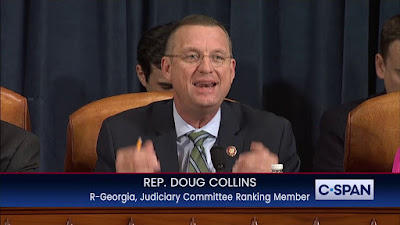 Q: Who said the whistle blower's report got everything wrong?
A: President Trump.

Q: Who claimed the FBI spied on his presidential campaign?
A: President Trump.

Both the House impeachment inquiry and a report issued Monday by the Justice Department's Office of the Inspector General have debunked those claims.

False claims by this president could fill volumes. Few of those claims are justiciable. Fewer still because he refuses to testify under oath to what he knew and when he knew it.

Rep. Eric Swalwell (D-Calif.) appropriated that formulation from the Nixon-Watergate investigation to make a sharp point about just how much we know do about Donald Trump's actions on Ukraine. Swalwell used his five minutes of questioning in the House Judiciary Committee's hearing to ask Democratic counsel Daniel S. Goldman a rapid series of questions with a two-word answer (watch the clip for the full exchange):

“As to anything that we do not know in this investigation, who has blocked us from knowing it?” asked Swalwell. “President Trump and the White House,” Goldman said.

“So as it relates to President Trump,” Swalwell concluded, “is he an incidental player or a central player in this scheme?”

“President Trump,” Goldman said, “is the central player in this scheme.”

As Rep. Swalwell notes, nobody asks “what did Trump know and when did he know it?”


What really ought to be knotting Trump's gut is that his Republican "allies" in Congress offer no defense of his actions. But they complain endlessly about the "unfair" process. They decry the lack of "fact witnesses" to Trump's alleged misdeeds while demanding testimony from Joe and Hunter Biden, who witnessed none of them.

They will respond to the IG report in similar fashion. The IG report clears the FBI of wrongdoing in opening its Russia investigation. Trump's defenders will focus instead on errors made in the process because the central findings are stated so plainly (pg. 410). Opening the Russian counterintelligence investigation "was in compliance with Department and FBI policies, and we did not find documentary or testimonial evidence that political bias or improper motivation influenced his decision." Furthermore, "we found no evidence that the FBI attempted to place any CHSs within the Trump campaign, recruit members of the Trump campaign as CHSs, or task CHSs to report on the Trump campaign. [CHS: confidential human source]

None of this will prevent the president and his men from hard-selling "alternative facts," a moniker for the Trump administration presidential adviser Kellyanne Conway coined nearly three years ago. No sooner had the IG report hit the streets than Department of Justice head Attorney General Bill Barr issued a statement disagreeing with the findings of his own department, similar except in timing to his prebuttal of the Mueller report this spring.

Republican members repeatedly complained about Democrats relying so heavily on testimony by European Union Ambassador Gordon Sondland. Beside those on the infamous July 25 call, Sondland was the only Trump direct report to testify, they well know, because Trump refuses to allow his subpoenaed subordinates to testify.

Rep. Jim Jordan of Ohio and other Trump allies loudly and proudly repeat conspiracy theories and alternative facts as if red-faced repetition will turn lies into truth. Michelle Goldberg last week suggested ranking Republican Rep. Doug Collins's insistence "There are no set facts here" amounts to "epistemological nihilism." But their belief that loudly chanting lies enough times will transform them into truth is also a kind of epistemological alchemy.