Cross currents for blackmail. Once again, Trump's actions accrue to the benefit of the Russian government.

Cross currents for blackmail. Once again, Trump's actions accrue to the benefit of the Russian government. 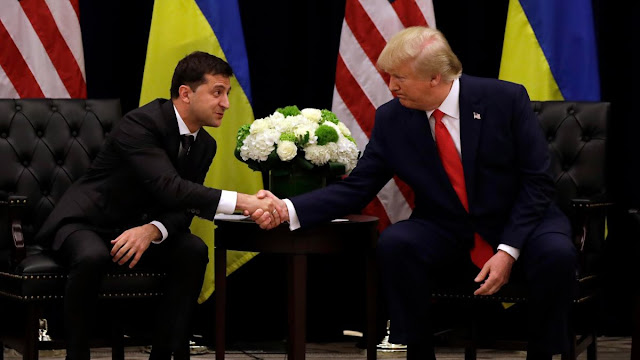 This piece at the Daily Beast by Betsy Swan isn't getting the attention it deserves.

People working closely with Ukrainian President Volodymyr Zelensky have been in contact with Trump administration officials over the past several weeks discussing the relationship between the two presidents, according to four people with knowledge of the talks. Based on those conversations, Ukrainian officials came to expect that President Donald Trump would make a statement of support before Zelensky met with Russian President Vladimir Putin in France for peace talks. A statement might even come via Twitter, they said they were told.

“Through all the signals we got, we firmly believed there would be a statement,” a senior Zelensky administration official told The Daily Beast.

But as Saturday and Sunday ticked by, there was only silence from the White House. Even as Ukrainian officials have publicly been loath to criticize Trump’s pressure campaign on their country, frustrations with Washington have quietly percolated. And last weekend, they were especially acute.

On Monday, Zelensky and Putin met in Normandy, France for face-to-face negotiations on the war in eastern Ukraine. Russia had seized Ukraine’s Crimean peninsula in 2014, and has ever since backed separatists in the eastern part of the country. French President Emmanuel Macron and German Chancellor Angela Merkel were on hand for the talks. Putin and Zelensky agreed to exchange “all known prisoners,” according to The Washington Post. Another round of talks is expected in several months.

Words of support from the United States in the lead-up to the Normandy talks could have given the Ukrainian president more leverage with Putin, according to the Zelensky administration official and two additional people close to his administration. Instead, Trump spent the weekend on Twitter tweeting about Fox News pundits, House Speaker Nancy Pelosi, and CNN. It was a particularly busy weekend of social media for him, with more than 100 tweets and retweets by Politico’s count. But no word on Normandy.

And the next week put salt in the wound. On Tuesday, Russia’s Foreign Minister Sergey Lavrov held a joint press conference with U.S. Secretary of State Mike Pompeo and made an appearance at the White House.


One of the people close to the Zelensky administration said the silence from White House—combined with Lavrov’s photo-friendly visit to Washington—sent “a terrible signal” and was “most unfortunate.” According to a read-out of Trump’s meeting with Lavrov, the president “urged Russia to resolve the conflict with Ukraine.” The Ukrainian official called the episode “frustrating.” Ukrainians say they view the coupling of Trump’s pre-Normandy silence and the administration’s decision to welcome Lavrov as a signal in an of itself—and not a good one.

A Time interview published earlier this week captured Kyiv’s willingness to publicly bolster Trump’s version of events. Andriy Yermak, a top aide to Zelensky, contradicted a key assertion that European Union Ambassador Gordon Sondland made in congressional testimony last month. Sondland had said he pulled Yermak aside during an event in Warsaw and urged him to have Kyiv announce Trump-friendly investigations. Yermak, meanwhile, told Time that no such conversation happened. The statement was a body blow to a key impeachment witness’s testimony, though Sondland’s lawyer said he stood by his description of events.

In a separate interview, Zelensky said he did not speak to Trump in terms of “you give me this, I give you that.” Trump tweeted out a link to the interview and thanked Zelensky for the comment.

Trump’s relationship with Ukrainian President Volodymyr Zelensky was a key focus of Democrats’ impeachment inquiry. The inquiry began after an anonymous Intelligence Committee official filed a whistleblower complaint in August alleging that Trump pressured Zelensky to announce investigations of a company linked to the Bidens and of alleged Ukrainian meddling in the 2016 election. The complaint said that Trump was withholding military aid from Ukraine until those investigations were announced. Trump has vehemently denied allegations that withholding the military aid—which happened for a short time at his orders—was part of a pressure campaign. Sondland, meanwhile, told Congress that the administration was explicit that it refused to arrange a White House meeting between Trump and Zelensky until Kyiv announced the two investigations.

After weeks of closed-door depositions and hearings, Pelosi announced the introduction of two articles of impeachment based on Trump’s pressure on Ukraine. House Democrats are expected to vote on those articles as soon as next week. If they pass—which is extremely likely—then they will be referred to the Senate for a trial.

Think about this for a moment:

Ideally the US President would not be susceptible to blackmail by anyone. Having a president who’s cross-pressured by potential blackmail from Ukraine, Russia, his ex-wives, his employees, Epstein’s estate, and the parent company of the National Enquirer...is less than ideal.
— southpaw (@nycsouthpaw) December 12, 2019

God only knows what's motivating him. But the fact that he's got this many potential blackmail pressure points --- that we know of - leads me to believe that he's probably responding to some of them. He's very dim. But he knows his own vulnerabilities better than anyone.