Trump is going ahead and doing it again. As he's being impeached.

Trump is going ahead and doing it again. As he's being impeached. 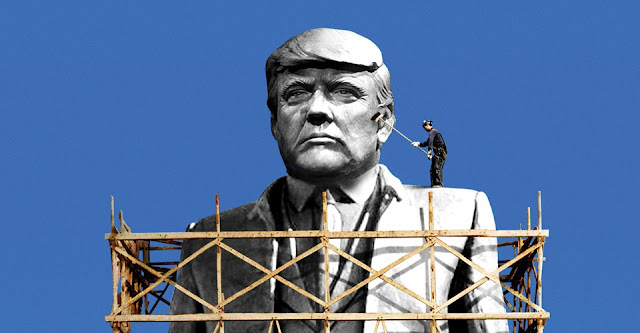 It's hard to believe he'd do this, but there is no stopping him:

Giuliani reportedly intends to brief Trump on the results of his trip to Ukraine last week, where he met with Ukrainians hawking various forms of dirt on Democratic politicians.


It is that same effort to induce Ukraine to manufacture opposition research which led to Trump’s impeachment, an irony that appears lost on the former New York City mayor.

Giuliani has said that Trump asked him to brief Attorney General Bill Barr, as well as Republican senators on what he learned while studying corruption abroad last week.

Here's what it's about:

Rudy Giuliani has yet another new anti-Joe Biden theory ready to go, conjured up during his trip to Hungary and Ukraine last week.

The latest Rudy eruption makes the fantastical and unsubstantiated allegation that the U.S. embassy in Kyiv, under the tenure of former Ambassador to Ukraine Marie Yovanovitch and under the direction of Vice President Joe Biden, diverted a whopping $5.3 billion in American aid that was intended for the embattled former Soviet republic.

It gets better though. Soros is involved. Of course.

Biden and Yovanovitch, as Rudy’s theory goes, moved the funds to the embassy’s “favored” non-governmental organizations which, you may not be surprised to learn, allegedly have ties to the billionaire philanthropist and bogeyman of the right.

This latest confabulation from Rudy is similar but distinct from his other new conspiracy theory, ostensibly related to the investment firm Franklin Templeton, that he and his pro-Trump allies in the right-wing media are pushing.


The Accounts Chamber in Ukraine found an alleged misuse of $5.3B in U.S. funds during the Obama administration while Biden was “Point Man.”

The Ukrainians pushing it have featured in One America News’ “documentary,” which is comprised of interviews with an array of dubious former Ukrainian officials conducted last week in Budapest and Kyiv.

Andriy Derkach, a Ukrainian MP and graduate of the Felix Dzerzhinsky Higher School of the KGB who reportedly wrote his PhD thesis on the “organization and conduct of meetings with secret agents,” said last week that he outlined the allegations for Giuliani during a meeting in Kyiv.

Derkach, in his letters, alludes to the creation of a joint investigative commission on the matter between the U.S. and Ukraine, called “The Friends of Ukraine STOP Corruption.”

He accuses “representatives of grant-eaters also known as ‘Children of Soros'” of stymying the investigation.

But a detailed look at the allegations set forth in the theory suggest that even on its own terms, the narrative doesn’t add up.

The theory relies on a December 2017 audit of $5.3 billion in foreign aid flows published by Ukraine’s accounting chamber, a state-run audit agency.

But right off the bat, Giuliani and those feeding him the allegations get basic facts wrong. They claim that $5.3 billion in U.S. aid was diverted; the report states that the $5.3 billion came from several foreign backers of Ukraine’s, while the U.S. only contributed $1.44 billion.

Beyond that, the audit states that the majority of the aid went towards security and safety measures for Ukraine’s network of nuclear power plants, and not non-governmental organizations. Instead, the report states, around 5.5 percent of the total aid went to “governance and civil society” organizations.

Giuliani himself connected the issue to President Obama, suggesting that he had neglected his constitutional duties somehow while Trump picked up the non-existent baton in the bid to pressure Ukraine.

Art 2, Sec. 3 of the US Constitution obligates the President to investigate and ask for investigations of corruption in countries we provide funds to.

Who ever heard of a president being impeached for carrying out his constitutional mandate?
— Rudy Giuliani (@RudyGiuliani) December 6, 2019


Giuliani embarked on this latest dirt-digging effort in Ukraine after the impeachment inquiry got underway in September.

The impeachment inquiry seeks to remove his client, Donald Trump, from office, and was sparked by Giuliani’s earlier efforts to dig up dirt on the President’s behalf in Ukraine. The President’s personal lawyer traveled to Kyiv twice in 2017, and met with Ukrainian officials at his New York City office in January 2019.

Giuliani has publicly narrated his efforts to squeeze Ukraine into providing dirt that would discredit the prosecution of Paul Manafort and cast a cloud on the candidacy of Joe Biden.

But as time and the impeachment inquiry have worn on, the former New York City mayor’s star has fallen somewhat. His trip to Ukraine last week was reportedly arranged by Andrii Telizhenko, a 29-year old who worked at the Ukrainian embassy in Washington for six months in 2016.

Neither U.S. officials stationed in Kyiv nor members of Volodymyr Zelensky’s government met with Giuliani while he was there, a contrast to his trips in 2017 where he was welcomed by U.S. and Ukrainian government officials.


I don't know how far he's going to get with this. If Trump pushes this publicly, you  would think the Republicans would feel compelled to not only convict Trump and remove him from office, but have him hospitalized.

This is lunacy and if it makes you feel crazy too, I'm pretty sure that's part of the plan.

“Members of the Senate have said, ‘I understand everything there is about this case and I won’t vote to impeach the president.’ Please allow the facts to do the talking.”pic.twitter.com/UdEQytLyZZ https://t.co/A7qe5GxSkU
— Windsor Mann (@WindsorMann) December 13, 2019