What a picture is worth by @BloggersRUs

What a picture is worth 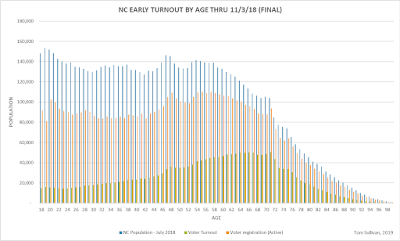 It's been a hell of a week and it's not quite over.

The House Judiciary Committee on Friday passed two articles of impeachment against Donald J. Trump, acting president of the United States. The full House of Representatives votes on them next week.

Time magazine named Swedish climate activist Greta Thunberg, 16, its Person of the Year for 2019. Trump mocked the teen the next morning and the Trump War Room Twitter account photoshopped Trump's head onto her body in a flaccid attempt to distract from the president's legal/political problems.

But a tweet that popped up this morning helped reset my perspective on where we go from here.

Sir David Attenborough spoke in July to British MPs about the impacts of climate change. The tweet contained a clip from the hour-long meeting. Attenborough calls out leaders in the U.S. and other countries for ignoring climate issues that young people see very clearly will affect their futures:


Nobody thought that human beings could change the climate. I mean, we now know we are and what is worse, of course, is that we are changing the climate in a way that is irreversible. If the world climate change goes on as it is, we are going to be facing huge problems with immigration. Large parts of Africa will become even inhabitable than they are now.

We cannot be radical enough in dealing with these issues at the moment.

I have no idea what the future holds. I see no future in being pessimistic because that leads you to say, 'Then, to hell with it. Why should I care?' And I believe that way disaster lies. So, I feel an obligation. The only way you can get up in the morning is to believe that, actually, we can do something about it.

"We cannot be radical enough in dealing with (this crisis)."
~Sir David Attenborough


At the top is the latest version of a chart I've been playing with since last fall. It maps state population against voter registration and 2018 turnout BY AGE. We've been using it for voter registration show-and-tell. The beauty is, if you show, you don't have to tell.

The NC-9 do-over election held on September 10 meant the state never posted the certified statewide file of who voted in the 2018 mid-terms. I'm still trying to get that uncertified file. What's at the top is only the early voting. I expect the full results will simply make the voter turnout curve about 80 percent taller.

Several things are evident. Older people vote more. That's not news. Peak registration is about age 56. Peak turnout is around age 66. People over 45 outvote younger voters by nearly 3 to 1. (Final numbers will likely increase that spread.) But population-wise, voters over 45 only outnumber younger voters by 11 percent.

The problem with reporting on numbers, whether it be cancer risk or voter turnout, is the propensity in the press to compare this thing to that one or this election to the one before in terms of percentage change. In 2018, voting by citizens ages 18-29 jumped "16 percentage points since 2014," the Washington Post reported. Breathtaking! But 16 percentage points above what? Voters 45-59 and 60+ voted at 60 and 66 percent respectively. The 18 to 29s turned out at 36 percent, and the 30-44s at 49 percent.

The point is not to berate the young for under-participation. It is to, graphically, point out why things that should change don't. The numbers are there. The power is there. The urgency, too. Us oldsters are tilting the country towards white nationalism and screwing up the planet and their futures because we are the voices to whom politicians listen. We vote. Stop us before we outvote you again.