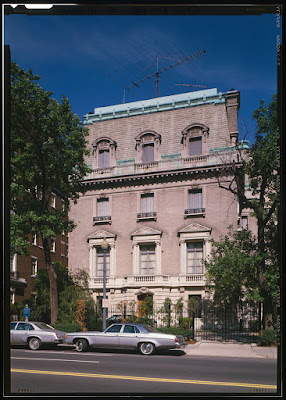 The acting president of the United States damned sure doesn't want anyone examining his tax records. He's fought tooth-and-nail in court to keep investigators from seeing what he promised repeatedly during his 2016 campaign he would share with the public.

But secure his telephone conversations? Nah! From the Washington Post:

President Trump has routinely communicated with his personal lawyer, Rudolph W. Giuliani, and other individuals speaking on cellphones vulnerable to monitoring by Russian and other foreign intelligence services, current and former U.S. officials said.

Phone records released this week by the House Intelligence Committee revealed extensive communications between Giuliani, unidentified people at the White House and others involved in the campaign to pressure Ukraine, with no indication that those calls were encrypted or otherwise shielded from foreign surveillance.

The revelations raise the possibility that Moscow was able to learn about aspects of Trump’s attempt to get Ukraine to investigate a political rival months before that effort was exposed by a whistleblower report and the impeachment inquiry, officials said.

But, hey, it's not like the Deep State is listening in, right?

Trump is not identified by name in the House phone records, but investigators said they suspect he may be a person with a blocked number listed as “-1” in the files. And administration officials said separately that Trump has communicated regularly with Giuliani on unsecured lines.

“It happened all the time,” said one former senior aide, who noted that Giuliani had a range of foreign clients.

The disclosures provide fresh evidence suggesting that the president continues to defy the security guidance urged by his aides and followed by previous incumbents — a stance that is particularly remarkable given Trump’s attacks on Hillary Clinton in the 2016 presidential campaign for her use of a private email account while serving as secretary of state.

Weakness is a cardinal sin for conservatives, as it was for Trump's mentor, Roy Cohn. Attack, counterattack and never apologize. A consistent criticism Republicans level against Democrats is they are weak. Weak on crime. Weak on defense, etc. Donald Trump fixates on projecting strongliness. It's one of his many tells.

An indelible childhood memory from my first visit to Washington, D.C. was seeing the top of the Soviet embassy bristling with antennae (similar to above). The Russian embassy's new digs on Wisconsin Avenue are more discreet about their communications gear.

Seeing as prominent GOP leaders now parrot Russian talking points, perhaps, as David Rothkopf told Greg Sargent, “Trump, his administration and the GOP have made a conscious choice to align themselves with Putinism ... It is not unwitting.”

"Putinism," Sargent writes, is a worldwide movement "that allies various ethno-nationalist and illiberal authoritarian leaders against Western liberal democracy, the rule of law, international institutions and the commitment to empiricism in the face of disinformation."

When I first set eyes on the Soviet embassy, Pete Seeger was singing "Which Side Are You On?" about unions and G.O.P. hawks were warning us about Russian propaganda. Now they're trafficking in it, and it's less clear which side they are on.